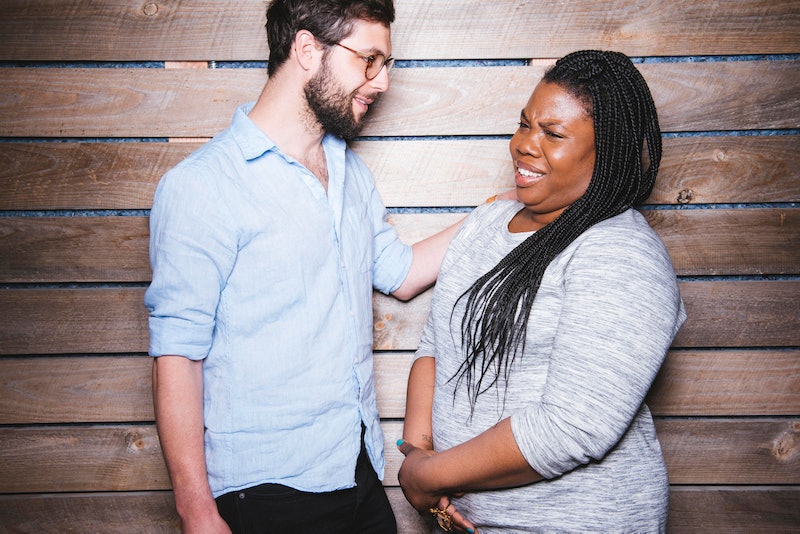 Getting rejected by someone you like can feel terrible. Because of that, it's not uncommon to feel the need to soften the blow when you're in the position to let someone down. I mean, how many times have you started or even ended a rejection with an, "I'm sorry"? But according to a new study published in the journal Frontiers in Psychology, your good natured attempts at trying to make someone feel better during rejection might actually make them feel worse.

"When someone apologizes for rejecting another person it's like a one-two punch," NYC-based Relationship and Wellness Coach, Shula Melamed, MA, MPH tells Bustle. "First, you're getting rejected. Then, the person rejecting you is offering you some pity through an apology? Ouch."

In fact, researchers from Dartmouth College recently conducted a study on social rejection. Unlike previous studies that put focus on the person being rejected, lead author, Dr. Gili Freedman was more interested in examining the rejector. "Most people have had the experience of wanting to minimize the hurt of the person they are rejecting," Freedman said in a press release. "But how exactly do you do that?"

For one part of the study, Freedman and colleagues surveyed over a thousand people and found that 39 percent of people said attaching an apology to a social rejection, like going on a second date, was a "good way of saying no." However, when asked to put themselves in the rejected position, those same people reported to having higher levels of hurt feelings. So despite thinking it's helpful when you're the one rejecting someone, they don't actually believe it's helpful when the tables are turned. Researchers conducted two follow-up experiments and found that not only do rejected people feel worse after being given a "pity" apology, they're also likely to feel like they have to forgive the rejector before they're ready. One experiment even found that hidden feelings of resentment may even cause the rejected to seek out subtle forms of revenge.

So apparently saying, "I'm sorry" after letting someone down isn't really going to do anything for anyone. Unless, of course, you have other motivations for your apology. "When people apologize after they reject someone it is more likely designed to make the rejector feel better about potentially hurting someone rather than caring for the rejected," Melamed says.