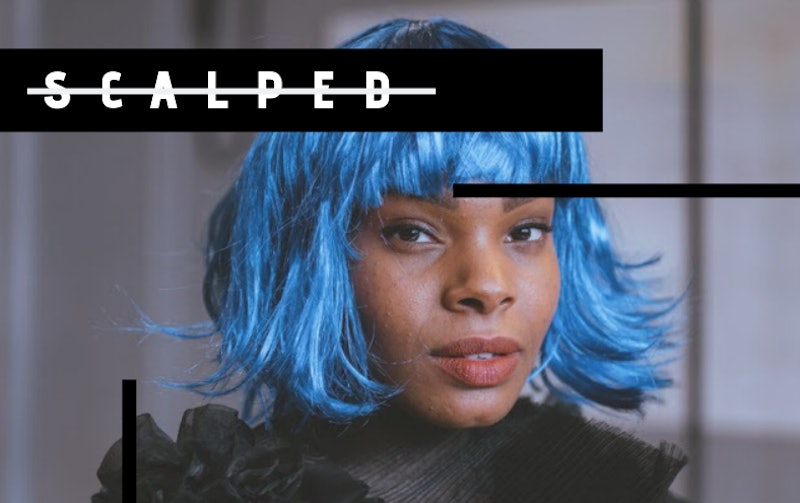 For black women, the topic of hair has often proved divisive, and the peculiar dialogue surrounding it has resulted in it somehow becoming part of many women's identity. We have long been encouraged to embrace our natural hair and wear our 'fros, but with labels like "nappy" and "pelo malo" it can be hard to do that with confidence. In Scalped, a new theatre show coming to London, black women's hair takes centre stage. The show is performed outdoors and combines theatre and dance to explore the objectification of black women's hair — and, trust me, it's here to bring us solace.

Scalped is a new project from the Melanin Box Festival creators Initative.dkf. This festival should definitely be on your radar since, as the website explains, its aim is to "highlight depictions of Black people beyond preconceptions," "[c]elebrate Black British talent in Britain — not once they’ve blown oversea," and "[p]rovide career development and encourages tenacity through competition and awards.​"

Scalped is set to open up the conversations in a similar way, but this time specifically concerning black hair. Initiative.dkf says "whether permed, braided or in locs, black hair is political," and I know just how true that is. From the different ways it looks to the old wives tale that "black hair doesn't grow," the negativity surrounding the hair debate has been tough to shake. Despite this, however, afro hair has become pertinent to black women's identities. But growing up the western world has encouraged us to display Eurocentric beauty ideals that negate the idea of embracing our hair.

The creators of Scalped are working towards creating a different narrative when it comes to black women's hair. One of the creators, D.K Fashola, says that the show is "an idea that women can connect with." Fashola continues:

"The feeling that you have to attach something for beauty; natural is not enough. For us its goes beyond this. Attach whatever you want to your hair, or rock it natural. Love yourself — don’t be afraid to explore with attachments, but don’t get lost in it either. You are not the attachment."

The idea for Scalped stemmed from the scrutiny that black women face in regards to their hair. Many people are unaware, but this scrutiny is widespread, with stories such as the one from BBC in May 2016 that revealed one woman in London had been told to wear a weave to work because her natural afro was deemed unprofessional clearly illustrating that point.

The choreography in Scalped looks to be pretty incredible. Through the medium dance, the performers will physically show an investigation around afro hair while breaking down themes of blackness. D. K. Fashola told Bustle UK: "With our native city being the cosmopolitan metropolis that is London, what came to mind almost immediately was the shared experience of Black women (and men) of being looked at, poked and prodded, and how much our hair becomes the focal point of this in day-to-day life."

Scalped also draws upon inspiration from some of the fiercest black women that have helped paved the way for future generations, such as Grace Jones. A number of Jones' quotes can be heard throughout the show to demonstrate "how she lived beyond expectations of what a Black woman 'can' think, say, or be."