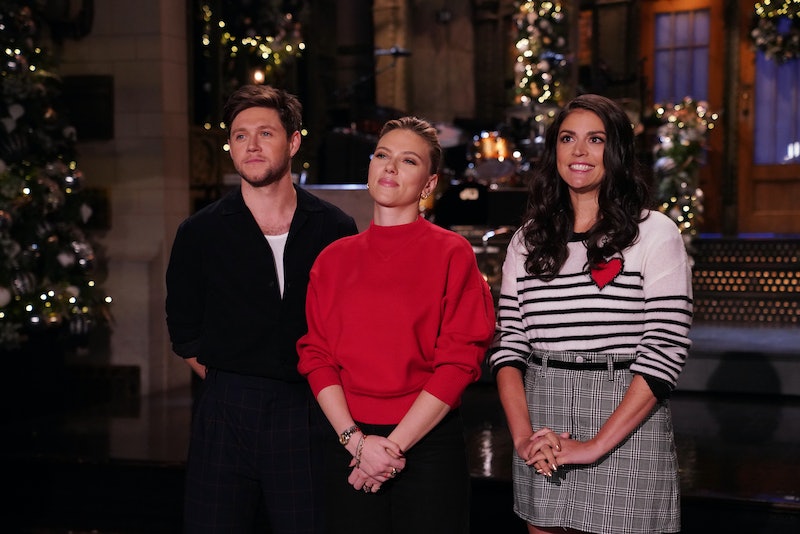 Scarlett Johansson returned to Studio 8H for her sixth stint as host of Saturday Night Live, and the Avengers just couldn't stay away. Scarlett Johansson's SNL monologue on the Dec. 14 episode featured the return of Thanos — well, kind of. Her monologue started off as expected, with the actor acknowledging her history with the show and giving a nod to her fiancé, cast member Colin Jost. “If the show’s bad, what are they going to do, fire my fiancé?," she quipped. But then the Avengers villain made his presence on the SNL set known.

Cast member Aidy Bryant joined Johansson on stage in a holiday costume, but as she kept talking, she started disappearing into (literal) thin air. Gradually, other cast members backstage rapidly dissolved as if they were just defeated by Thanos themselves. "First Asian cast member and you guys are dusting me? Twitter is going to eat you alive," Bowen Yang hilariously shouted as he turned to dust.

Things got so out of hand that Jost came running out on stage, thinking that Johansson would be relieved to see him alive and well. "Am I going to have to save everyone? I left my Black Widow costume in the car," she declared. She was so frazzled that when Kenan Thompson came out on stage dressed as Nick Fury, she totally forgot who he was. "Do you not watch the movies?” Jost remarked.

Johansson and Thompson then learned that it was actually none other than Pete Davidson, donning Thanos' glove, who was behind the mayhem. But for the sake of holiday spirit, Davidson agreed to let everyone free, and even got in a self-deprecating joke about his absence from a few of this season's episodes.

Her monologue became very sentimental after the end of the bit, with the cast joining Johansson on stage as she explained how she met the "love of her life" on SNL and gave Jost a sweet kiss. It was a moment so touching that even Thanos would have shed a tear... probably.

More like this
Michael B. Jordan Tackled His "Public Breakup" With Lori Harvey On 'SNL'
By Brad Witter
The Black Lotus Staff Has "Had Enough" In The 'White Lotus' Spoof From 'SNL'
By Brad Witter
Who Is Pete Davidson Dating? He & Chase Sui Wonders Got Caught Kissing
By Jake Viswanath
Here’s Why Danny Masterson’s Hyde Isn’t In 'That '90s Show'
By Brad Witter
Get Even More From Bustle — Sign Up For The Newsletter
From hair trends to relationship advice, our daily newsletter has everything you need to sound like a person who’s on TikTok, even if you aren’t.