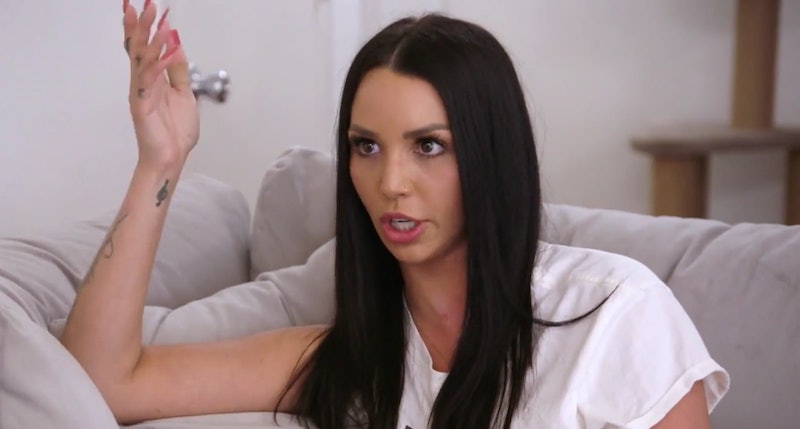 Someone call Countess Luann, because Scheana from Vanderpump Rules may need a course on proper gift-giving etiquette. Over the years, Scheana has established herself as the show's resident queen of elaborate presents: she adopted a penguin for her "best friend" Adam Spott right in the middle of a messy fight about another man she'd hooked up with, and gave an Apple Watch to her other "friend" Max after a couple weeks of dating only for him to promptly ghost her. The woman is generous, but she also has really, really unfortunate timing.

That came back to bite her during Vanderpump Rules' April 21 episode, during which, as a birthday present, she hired a psychic to channel Dayna's late mother. Scheana — who only recently smoothed things over with Dayna after hazing her at SUR — sprung this unexpected gift on Dayna while visiting her apartment, explaining that she'd made sure the psychic was available that day should she want to connect with her mom's spirit.

To Scheana's surprise, Dayna wasn't all that into the idea of sharing an intensely emotional experience with such a new friend — particularly with such little time to mentally prepare herself. Making matters worse, Scheana said she'd simply made sure the psychic would be around, but when she left Dayna's apartment, the psychic was already waiting outside. She told the psychic she wasn't expecting Dayna to not be ready for this... which Dayna could hear from her window, leading to an even more awkward confrontation.

"I just wanted to bring a minute of happiness to her, for her to know that her mom is so proud of her," Scheana said tearfully in her confessional. Her heart may always be in the right place, but woof, maybe just go with some snazzy socks next time?