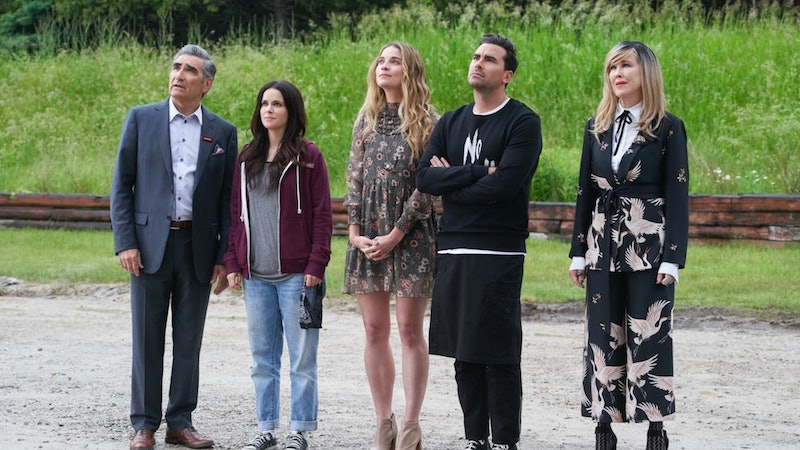 Cue a mashup of “Unwritten” by Natasha Bedingfield and “A Little Bit Alexis” by Alexis Rose: Schitt’s Creek was inspired by The Hills’ couple Heidi Montag and Spencer Pratt. In an interview on Entertainment Weekly’s podcast EW’s BINGE on Wednesday, Sept. 25, Schitt’s Creek creator and star Dan Levy revealed that the Canadian sitcom took inspiration from Montag and Pratt — otherwise known as their couple name Speidi in the early aughts.

Before his Schitt’s Creek fame, Levy served as a VJ for MTV Canada and hosted, among other things, a The Hills aftershow between its 2006 and 2010 run. His time on the aftershow provided an unexpected groundwork for Schitt's Creek, which returns for its sixth and final season on Jan. 7 on Pop TV. “Now, in retrospect, I can see the connection," Levy said of how Speidi’s money woes provided a framework for the Emmy-nominated series. "At the time I didn’t."

He continued, "What I found really fascinating was exploring that cultural awareness and saying now that we all know the day-to-day of these kinds of people — what would it look like if we played on that, took the money away, and examined what the family dynamic would be like without the money.” Patrick Gomez, EW senior editor and co-host of EW’s BINGE, then said, “So we have Heidi and Spencer’s money troubles to thank.” Montag and Pratt infamously went broke towards the end of The Hills in 2010 after spending a fortune on things like $30,000 shopping sprees and $4,000 bottles of wine, as per a June 2018 profile by Money.

During The Hills’ run, Levy co-hosted MTV Canada's The Hills: Live After Show with TV personality Jessi Cruickshank and offered humorous recaps of the series after every episode. In a throwback April 2009 clip of the show, a young Levy quips before diving into a recap, “Well, things happen on that show that I wouldn’t wish on anybody."

Given the revelation that Speidi very much laid the foundation for the Roses, Schitt’s Creek fans would be remiss to not examine a few more parallels to the MTV reality show. Aside from the Roses going broke, much like Spiedi once did, Alexis Rose (played by Annie Murphy) definitely emits some Heidi Montag vibes. In Season 5, Episode 8’s “The Hospies,” fans learn that Alexis once starred in a reality series (sounds like The Hills) titled A Little Bit Alexis when she auditions for the Cabaret production with the “critically-reviewed” title track from her short-lived reality series.

Alexis' song also calls to mind Montag's short-lived singing career during The Hills’ run. In January 2010, Montag released her debut 12-track studio album Superficial, which garnered mixed reviews. More notably, she released a music video for her track “Blackout” in March 2016 that featured auto-tuned vocals against the backdrop of a beach. Between “A Little Bit Alexis” and “Blackout,” both bops no doubt yield a similar upbeat, dance pop tempo. While her initial singing career was short-lived, Montag recently revealed plans to revive her music career in a July 29 episode of The Hills: New Beginnings — this time with a focus on Christian pop.

The Hills and Schitt's Creek, connected? It seems like the ultimate pop culture collision.