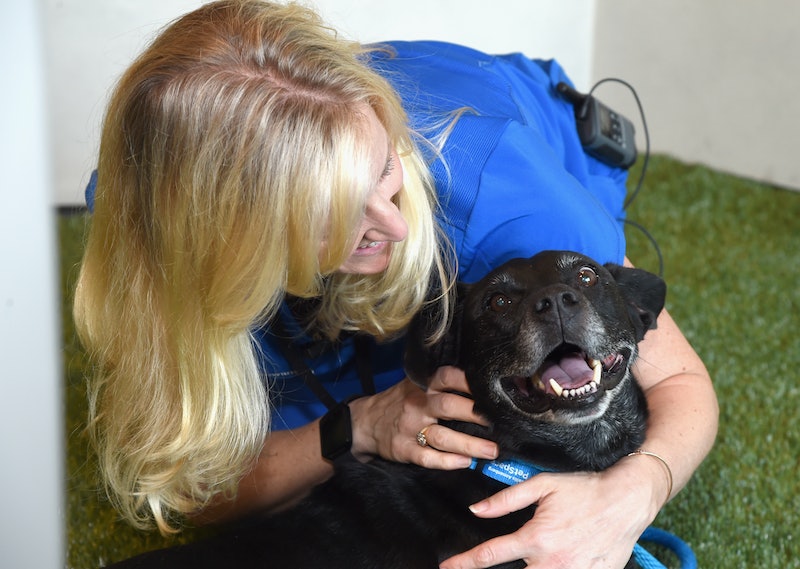 This is it, guys — this is the future we've been waiting for. Scientists are finally working on something we've always dreamed about but could never imagine becoming a reality: The ability to have a talk to our pets. Yes, it's true: Scientists are working on a pet translator, and it could mean that you might finally be able to actually understand what your dog is trying to say.

Well, OK, this might not go exactly how you're probably hoping it will go. Will you, a year from now, be able to sit down and have a conversation with your dog over a spread of bacon biscuits and tea? As amazing as that sounds, no, unfortunately you won't. But will the possibility of understanding the noises your pet is making be there? One day, yes. Baby steps!

Here's the deal: Advances in artificial intelligence suggest that scientists might eventually figure out how to translate what our pets are saying with the noises they make — in a limited way, anyway. According to NBC News, "With the help of AI, scientists are learning how to translate animals' vocalizations and facial expressions into something we can understand." That's more than a little exciting, especially for those who can't get enough of their pets. The thought of being able to understand a dog's bark is extremely exciting.

This has been in development for a while: Scientists have been using one AI system to listen to marmoset monkeys, and one to read sheeps' faces to figure out if they are in pain. Additionally, an Amazon-sponsored report in The Next Big Thing looked at future trends released last summer, and predicted that we could have a translator pets in 10 years. Co-author of the report and futurologist William Higham said, "Innovative products that succeed are based around a genuine and major consumer needs. The amount of money now spent on pets — they are becoming fur babies to so many people — means there is huge consumer demand for this. Somebody is going to put this together."

While the technology doesn't exist just yet, there's a good chance that it will sometime in the near future. With today's technological advances, researchers aren't ruling out the possibility that they can make this work — and they already are, in some small ways. Higham has pointed out the work of Con Slobodchikoff, professor emeritus at the Department of Biological Sciences at Northern Arizona University, who has been studying the behavior of prairie dogs for the last 30 years. He used AI to analyze the calls of prairie dogs, discovering that they have a "sophisticated communication system" that seems like their own language. He says they have their own words for things like predators and colors, and he's pretty convinced that other animals are using similar "languages." In fact, Slobodchikoff is so convinced of this that he's trying to raise money to develop a dog and cat translation device.

Not everyone is convinced, though. Juliane Kaminski, a psychologist at Portsmouth University who studies the interactions between humans and dogs, told The Guardian that she doesn't think the way a dog barks can be viewed as a language. However, Dr. Gregory Berns, a neuroscientist at Emory University and the author of What It's Like To Be A Dog: And Other Adventures In Animal Neuroscience, is slightly more optimistic, and told NBC that he could see it being very possible with dogs.

Will you soon be able to chat with your pets? A full-blown conversation is probably not going to happen (although I won't say never!), but the ability to get what they're saying just might be on the horizon. And that's definitely better than nothing!