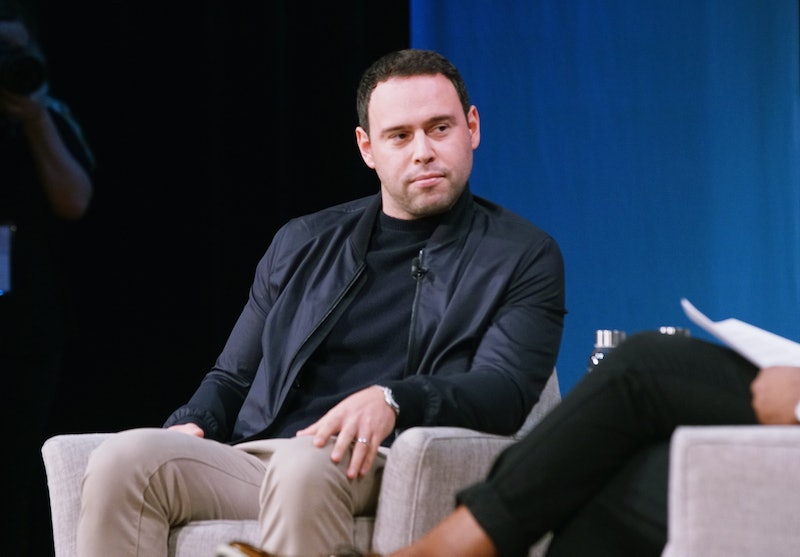 When Scooter Braun bought the masters of Taylor Swift's catalog as part of a deal to purchase her former label, Big Machine, nobody was more infuriated than the artist herself. Now, it looks like Justin Bieber's manager wants to clear the air. In fact, in a recent interview, Scooter Braun seemed open to talking with Taylor Swift, while also insinuating that she doesn't know the whole story.

In a new interview on Tony Gonzalez's Wide Open podcast, Braun opened up about he dealt with the online criticism that came with buying Swift's masters, without mentioning the singer by name. "I went through some drama recently," Braun said, as reported by Entertainment Tonight. "And then put my phone down, looked at my friends and my family… and I was like, 'I'm good…I'm happy.'" He added that whatever people say about his choices, "As long as the people that I love and respect are my compass, that's the direction I am gonna go."

Braun suggested during the interview that Swift doesn't necessarily have all of the correct information when it comes to his business deal, even though her feelings may be valid. "It's hard when you get attacked and it's not based on any truth, but for that other person it may be based on truth but they don't have all the information," he explained.

The talent manager then made it seem that he would like to talk to the singer and clear up any misunderstandings or issues between them, but also hinted that Swift was not willing to do the same. "That's why I am always open to communication and having a conversation with someone and saying, 'Maybe this was a misunderstanding and I am happy to have a conversation with you'," he continued. "But not everybody is willing to do that and you can't go through life thinking you're going to be friends and everyone is going to like you."

In June 2019, news broke that Braun purchased Big Machine for a reported $300 million and received majority ownership of Swift's master recordings under the label. The singer later took to Tumblr to explain why she disapproved of Braun owning her masters and accusing him of bullying her in the past. Braun, his wife Yael Cohen, and Scott Borchetta, Big Machine founder and Swift's former boss, all denied this claim and alleged that Swift's side of the story wasn't completely accurate.

Swift opened up again about the ordeal in an interview with Rolling Stone earlier this month, saying that what Braun and Borchetta did to her "was a redefinition of betrayal for me, just because it felt like it was family." According to Swift, Borchetta always knew her feelings about Braun, so much so that she didn't want to hear about any projects if he was also attached. "Here’s the thing: Everyone in my team knew if Scooter Braun brings us something, do not bring it to me," she explained.

In fact, the artist even alleged that Borchetta himself used to say some unpleasant things about Braun, which made their new partnership even more devastating for Swift. "The fact that those two are in business together after the things he said about Scooter Braun — it’s really hard to shock me. And this was utterly shocking," she added.

At the end of the day, Swift still intends to have full control over her music. The singer has announced plans to re-record her older albums when her contract allows, giving her ownership of new master recordings. And that will happen whether she and Braun ever make peace or not.