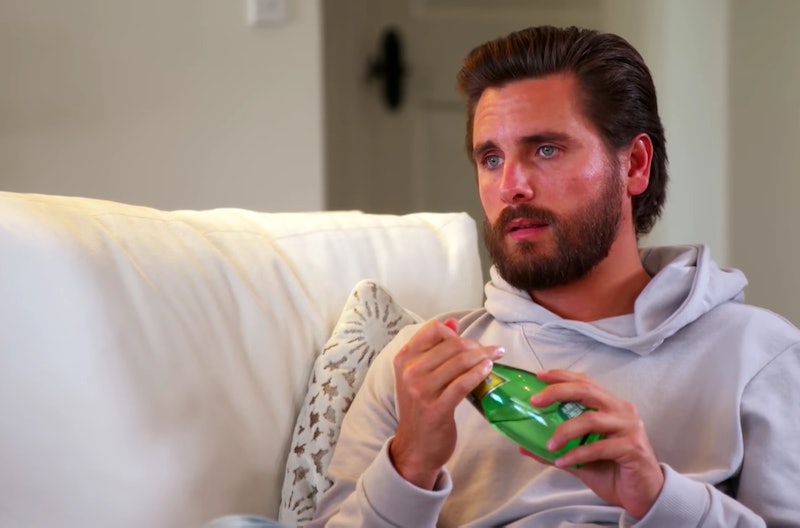 These two Keeping Up With the Kardashians stars may have broken up in July 2015, but that doesn't mean they don't hang out and have stopped all communication. Based on this clip from this coming Sunday's new episode, there's no doubt Scott Disick and Kourtney Kardashian's future is complicated. That's something that's been very clear for the past two years.

In the April 9 episode, Khloé Kardashian and Kim Kardashian question Disick after he and Kourtney embarked on a trip to Mexico together with their kids in tow. Disick even told Khloé that he kissed Kourtney goodnight, but she didn't kiss him back. Though, Disick makes it clear that Kourtney not reciprocating a kiss isn't anything new, because she did that while they were together.

He even admits that he's not dating other people, especially because it doesn't feel right. "I mean, technically I could I guess, but I don't feel comfortable," the Lord declares. There's a lot of feelings and frustration surrounding their relationship. As Kim also says to Disick in the clip, Kourtney seems to be "lagging" when it comes to a possible reconciliation with the father of her children.

All that said, Disick is far from over Kourtney — and probably won't ever be. "No, I feel like I will never be over her," he confesses. "She's the love of my life, but I just try to do everything to be there for her, but there's literally no appreciation for anything ever."

They've definitely had many ups and downs, which Disick recognizes. "I definitely realize that a lot of things truly are my fault and I'm happy taking ownership for all that," he says in the video. "I just hope that one day she understands that I would never want to be with anybody but her."

It doesn't really seem like he will ever move on from Kourtney, which certainly makes things even more complex for the two. There have been multiple times where Kourtney has made it clear she's doesn't want to get back with her former partner — at least right now. Obviously, that could all change, but Disick appears to be the only one ready, willing, and able to start dating Kourtney again. It'll be interesting to hear how Kourtney feels about all of this in Sunday's episode.

Who knows if or when that will happen, but the fact remains Disick and Kourtney's relationship might very well remain a complicated one, especially when it comes to deciding what exactly the future holds for them.

Keeping Up With the Kardashians airs Sundays at 9 p.m. ET on E!

More like this
Kendall Jenner Thinks Tristan Thompson "Wanted To Trap" Khloé With Another Baby
By Jake Viswanath
Clayton & Susie Broke Up, Citing "A Significant Amount Of Pain" After 'The Bachelor'
By Jordyn Tilchen
‘The Ultimatum: Queer Love’ Is Officially On The Way
By Radhika Menon and Kadin Burnett
How To Stream 'Pretty Wild'
By Arya Roshanian
Get Even More From Bustle — Sign Up For The Newsletter