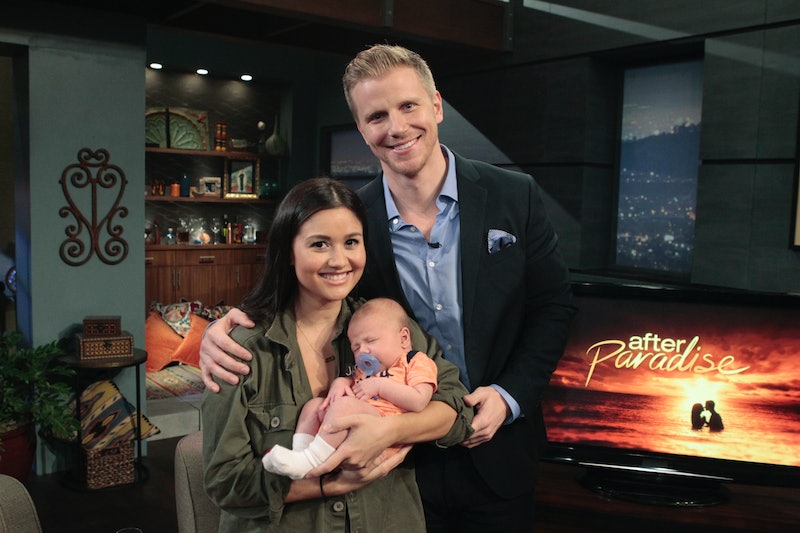 Bachelor Nation's Instagram photos are about to get even cuter. Beloved The Bachelor Season 17 alums Sean and Catherine Lowe are expecting their third child together! The reality TV alums shared this happy news in a June 19 interview with People.

Baby number three will be joining big brothers Samuel, who will be three years old in July, and Isaiah, who is thirteen months old. Catherine told the magazine, "We get to have these children who are going to be so close in age and get to grow up and have all these memories. Yeah, it’ll be hard for us but it’s just a chapter. It’s so fleeting."

As happy as the couple is to have children who will grow up so close in age, they didn't plan for the timing of this third pregnancy. Catherine confessed that they were "stunned" when they found out. She also revealed to People, "It was a complete surprise and I stared at the wall for a good 24 hours." Catherine even recalled, "I was like, 'I just had one of these!'" She also revealed that Isaiah was just eleven months old when she found out she was pregnant.

They actually found out because Sean mentioned the possibility when she wasn't feeling well before offering her antibiotics. However, Sean breaking the pregnancy news is actually a tradition for the Lowes. Catherine told People, "Every time we get pregnant, [Sean] tells me."

Catherine elaborated, "I leave the stick in the bathroom and he comes out with the stick. So every time that we’ve found out, he’s the one who is telling me." Of course, the parents are excited about the new addition to the family, but so is their oldest son Samuel. Catherine shared, "He’s very excited and kissing the baby good night and praying for the baby."

Catherine and Sean may have been surprised by the timing, but Samuel is more than ready for round two as a big brother. Catherine revealed, "He knows what’s happening. He wants to see the baby — he’s trying to look down my shirt to see the baby!" Aww. Unfortunately for Samuel, he will have to wait a few months to actually see the baby, but maybe he can go with his parents to an ultrasound appointment.

With Sean and Catherine's reality TV days behind them, they have been very open sharing their family life with fans on social media. Truth be told, they always have the funniest tweets and Instagram captions. Of course, they shared additional commentary about the pregnancy news on their social media pages.

On June 19, Sean tweeted that they are adding to their family because he's a "glutton for punishment" and because Catherine "can't keep her hands off of [him]."

The soon-to-be parents of three shared family photos from Danielle Marie Photography, revealing Catherine's baby bump for the first time. Sean also joked on Instagram, "The first two have been pretty cool, so why not a third?" That's a good enough reason, to be honest.

Catherine didn't joke with her Instagram announcement. Instead she described their family as "party of five" and let the emojis do the talking.

Of course, this announcement is major news for the Lowe family, it but is also a big deal to Bachelor Nation. Instagram is about to get a whole lot cuter (with more baby photos) and funnier thanks to Sean and Catherine's always-hilarious parenting commentary.