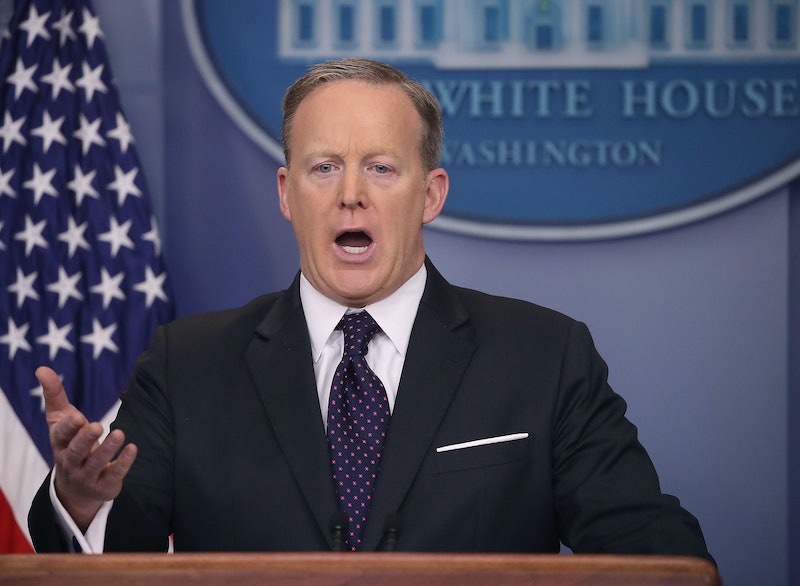 Trump's White House press secretary is known for his spin in the press briefing room, no doubt, but this statement takes the cake. On Wednesday, Sean Spicer claimed that Trump has made women's empowerment a priority. Perhaps what's worse is that he specified Trump made this a priority during his campaign — only if you were in a coma or stranded on a desert island for the entire 2016 election cycle could you possibly think this was true. But Spicer carried on regardless, as he often does when faced with spinning the impossible.

After running through a list of women in the Trump administration (this would perhaps be more impressive if its leader hadn't bragged about being able to grope women without their permission), Spicer said that attention towards women's issues would extend beyond March, Women's History Month. It's a nice sentiment, of course, if nothing else.

But then he followed it up with this:

The president made women's empowerment a priority throughout the campaign. Speaking out on affordable childcare and paid family leave, investing in women's health, and the barriers faced by female entrepreneurs and business owners.

If I'm remembering the 2016 presidential campaign correctly, Trump did not make a single one of those topics a priority. If anything, his daughter Ivanka made them talking points.

Trump, on the other hand, did a lot of this:

And before he was busy bashing Hillary Clinton or a former Miss Universe pageant winner, he did a good deal of this in the years prior:

Of course, there was also the candidate's infamous non-apology for his comments in the leaked Access Hollywood tape, in which he claimed:

Bill Clinton has said far worse to me on the golf course — not even close. I apologize if anyone was offended.

The examples are endless.

But that was only Trump the candidate — Trump the president, regardless of what Spicer says at his podium, has fared no better on women's issues. Though he may be slightly more sober in his tone on Twitter (at least from his official POTUS account), Trump's policies have been no friend to women. From the administration's attempts to slash Planned Parenthood funding to its degradation of women journalists, it's the same results with different packaging.

Spicer's assertion that Trump has prioritized women's empowerment is therefore just absurd. Whether he is on the campaign trail or in the White House, his rhetoric and policies on women have not changed.