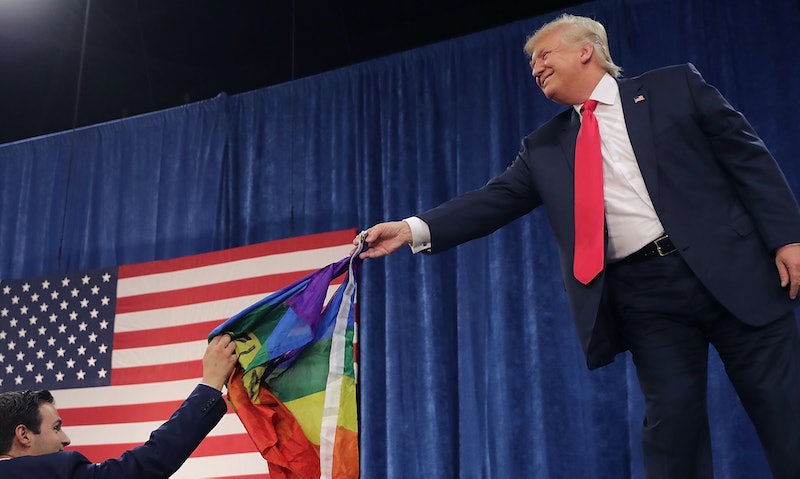 Sean Spicer's book is "light on insider detail of what was going on in the White House," as The Wall Street Journal argues in its review. But there is at least one revelation from before Trump was elected — or even became the Republican nominee for president. LGBTQ rights were mentioned by Trump during his Republican National Convention speech for the first time ever, but Spicer's book shows Trump's LGBTQ statement was actually just a quid-pro-quo political deal.

At the convention, there were a lot of "Never Trump" Republicans who were organizing to try and keep Trump from becoming the nominee. So Trump's campaign chairman Paul Manafort (yes, the guy who has been indicted several times, all stemming from the Mueller investigation) tried to intervene. The "Never Trump" Republicans had signed a petition in advance of the convention, and Manafort apparently wanted to quash it.

The Briefing: Politics, The Press, and The President offers an inside look at how the campaign chairman went about doing that. "Manafort and his lieutenants went one by one down the list of people who had signed the petition and persuaded them to remove their signatures,” Spicer writes. “How Manafort and company did this was a scene out of 1950s politics — alternating between carrot and stick and sometimes bat, even, at one point, conveniently making the convention’s parliamentarian unavailable to keep the opposition from formally submitting their petition.”

Spicer continues, "The Manafort message was clear: Trump will be our nominee and our next president, and anyone who didn’t want to work to that end could spend the next four years in political Siberia. (No Russia pun intended.)"

One of the people that Manafort wanted removed from the petition was Robert Sinners, a delegate from D.C. who wanted "wanted Donald Trump to support gay rights," Spicer writes. So, they made a deal.

Senior Trump communications advisor Jason Miller reportedly promised Sinners "that Trump would be the most ‘inclusive’ candidate the Republican Party ever had." And that's reportedly all he needed to hear to take his name off the petition.

"Jason told Sinners Donald Trump’s acceptance speech would acknowledge the LGBT community, which no other Republican acceptance speech had done,” Spicer writes in the book. “And it did." Bustle has asked the White House for a comment.

Here's what Trump ended up saying, which was technically historic at the time:

Only weeks ago, in Orlando, Florida, 49 wonderful Americans were savagely murdered by an Islamic terrorist. This time, the terrorist targeted LGBTQ community. No good. And we're going to stop it. As your president, I will do everything in my power to protect our LGBTQ citizens from the violence and oppression of a hateful foreign ideology. Believe me. And I have to say as a Republican, it is so nice to hear you cheering for what I just said. Thank you.

The obvious "but" is the criticism lodged against him for trying to pit LGBTQ Americans and Muslim Americans against one another. And as for actual policies that would help LGBTQ people, his administration has done the exact opposite. Among the anti-LGBTQ steps taken by the administration are the trans military ban, removing the LGBTQ question from the Census, and withdrawing guidelines that protected transgender students.

These polices could suggest the speech was insincere, and Spicer's book seems to confirm just that.