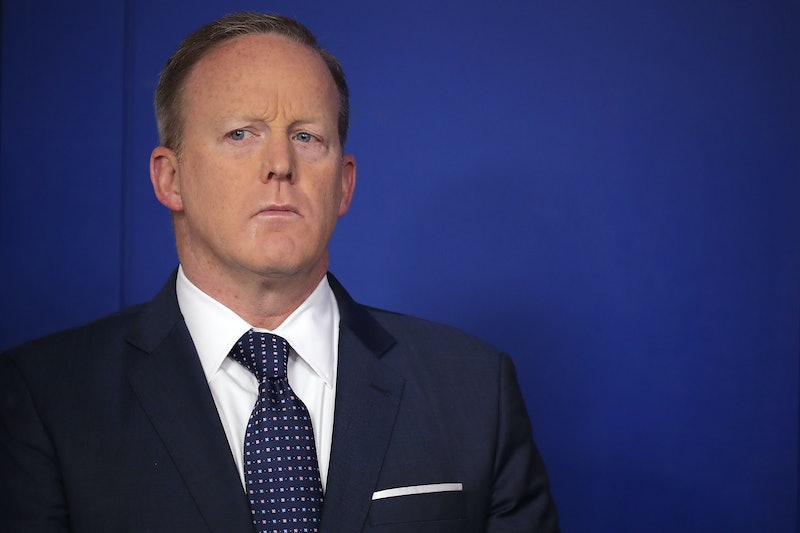 During his daily press briefing on Tuesday afternoon, Press Secretary Sean Spicer made a claim that's drawing a lot of attention. When questioned by a reporter whether the president's tweets should be considered official statements from the White House, Spicer said yes, and it's a pretty grim acknowledgement of how things operate in America right now.

The question of whether or not Trump's tweets constitute official statements is simultaneously an obvious and a loaded one, because if they are official statements, then they'd ostensibly be protected under the Presidential Records Act, meaning that Trump's occasional deleting of his tweets would constitute a violation of the law. Remember how frequently he attacked Hillary Clinton about her deleted emails? It's a far different size and scale, obviously, but the laws governing preservation and disclosure of records are the same, intended to assure that politicians can be held accountable for what they do while in public life.

The reason it's an obvious question, however, is that they're the president's tweets ― in what sense could one argue they're not official statements? When the question was put to Spicer, he clearly didn't have another answer on hand.

So, there you have it. According to Trump's press secretary, his tweets should be considered official statements. That makes the hot new political Twitter account @RealPressSecBot even more of an essential follow ― it ingeniously converts Trump's tweets into the traditional format of an official White House statement, thus highlighting the absurdity of how the president of the United States chooses to talk about some of the most sensitive issues and affairs around the world.

A particularly galling example was his out-of-context mischaracterization of London mayor Sadiq Khan's pleas for calm in the aftermath of the recent London terrorist attack. Trump saw fit to attack Khan― who is himself a Sunni Muslim ― rather than offer his support, something that looks even a bit worse in the traditional statement format than as an inflammatory, vitriolic tweet.

Of course, Trump's staffers and aides and secretaries have backtracked, contradicted, and immediately abandoned their official statements before. Trump even publicly claimed their statements couldn't always be accurate, because he's such a dynamic, freewheeling president. Another way to put it, of course, would be erratic and misleading.

As such, it's entirely possible that the next time you see Spicer, he'll strenuously deny that Trump's tweets count as statements, or maybe even deny he ever said they were. But video is forever, no matter the next day's spin.