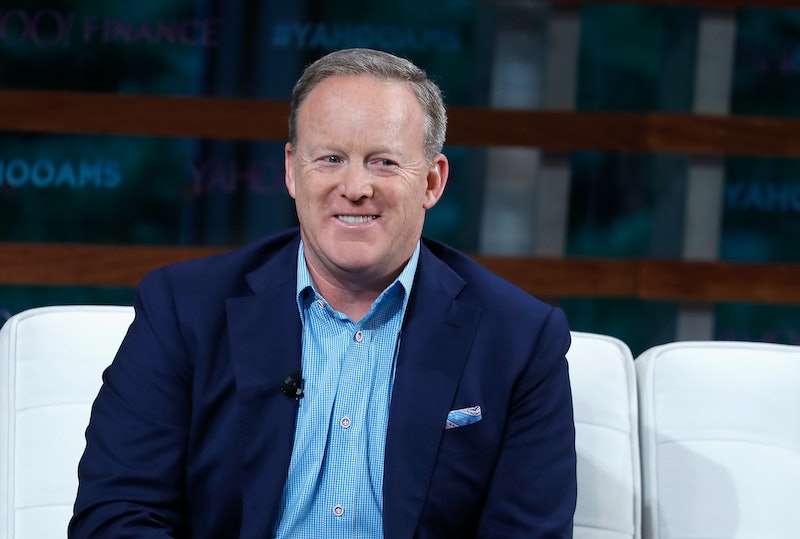 One of President Donald Trump's former press secretaries is venturing into entertainment television. Dubbed a "special D.C. correspondent" on ExtraTV, Sean Spicer is helping the program enhance its coverage of high-profile Washington figures.

In preparation for segments reportedly airing at the end of the week, the entertainment news outlet promoted Spicer's interviews with current members of the Trump administration — some of whom he used to work with. Among them were current Secretary of State Mike Pompeo, as well as his wife, Susan Pompeo.

But despite the fact that both men have worked within the federal government, the topics Spicer asked the couple about were not overtly political. In a video teaser shared to Twitter, the former press secretary asked the pair about which movies they're hoping take away awards at this weekend's Oscars.

In its promotional coverage, ExtraTV said that Spicer had also spoken to current Press Secretary Sarah Huckabee Sanders, her husband, Bryan Sanders, and Counselor to the President Kellyanne Conway. The interviews are due to air this week.

“They're all casual,” Spicer told The Hill of the segments. “The idea is just to literally, each one of them I go for a walk with them, talk about what do they like to do in their spare time.”

This appears to be precisely the case, if the Pompeo teaser video is any indication. During the video clip shared to Twitter, for example, Spicer asked Pompeo questions about what type of music he listens to when he is traveling.

"I got back to my high school," Pompeo said. "I have a big AC/DC collection... Country music, too. We love Toby Keith and all the country folks."

Spicer resigned as White House press secretary in July 2017. He was replaced by Sanders, who has held the position ever since.

After resigning from the White House, Spicer has only intermittently been in the public eye. He briefly appeared at the Emmy awards in September 2017, where he spoofed himself in his capacity as press secretary. In July 2018, he released a book about his experience working for Trump.

Spicer's interviews with former Trump administration staff members do broach more personal subjects, such as the impact that their line of work has had on their families, per the promotions shared by ExtraTV. For instance, Conway reportedly told Spicer that her job has proved to be a challenge, at times, for her children.

“It’s been a little tough on them sometimes because people are very cruel and mean and think they can say anything they want, even if it's not true, as long as it's hurtful and snarky and goes against somebody who's close to President Trump," Conway told the former press secretary, according to ExtraTV.

Whether Spicer will continue to interview other Washington officials is currently unclear.