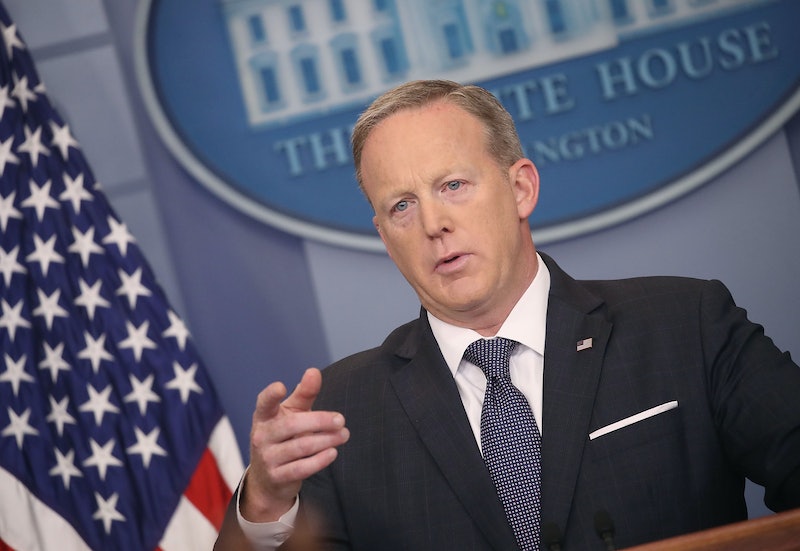 On Monday, POLITICO and Bloomberg reported that Donald Trump's press secretary, Sean Spicer, may be leaving his position and instead taking on a more "behind-the-scenes" role at the White House communications office. Moreover, POLITICO also revealed that Spicer might be interviewing his own potential replacements — and that he reportedly already has two candidates in mind.

According to The Washington Post, the White House has not officially confirmed Spicer's departure nor has it publicly indicated whether or not he is directly involved in the search for new communications team hires. Instead, deputy press secretary Sarah Huckabee Sanders merely indicated in a statement:

We have sought input from many people as we look to expand our communications operation. ... As he did in the beginning, Sean Spicer is managing both the communications and press office.

Bustle has also reached out to the White House for further comment, but has not received a response.

Several news outlets, though, report otherwise. According to CNN, it is not clear when exactly Spicer would be replaced, if indeed he is to be replaced. Many have noted that Spicer has been appearing on camera less in recent weeks, with his deputy Sanders frequently replacing him during press briefings. Bloomberg reported that, according to sources familiar with the situation, if Spicer leaves, he will likely take a more senior role in the communications office that is "behind-the-scenes" and focused on broader communications strategy and messaging.

POLITICO reported yesterday that Spicer is seemingly already involved in the search for a new press secretary. The news outlet noted a White House official said that, last week, Spicer and White House chief of staff Reince Priebus contacted two potential candidates to fill the roles of White House press secretary and communications director, the latter of which has been temporarily also held by Spicer after former director Mike Dubke resigned in May.

POLITICO reported that Spicer and Priebus reportedly reached out to Fox News contributor Laura Ingraham about the press secretary role, and Daily Mail editor David Martosko for the communications director position. Ingraham declined to comment on the matter, and while Martosko answered a phone call, but then indicated that he could not hear the caller, hung up, and did not responded to a subsequent email.

It will certainly be interesting to see if and how the White House communications office evolves, particularly if Spicer is replaced as press secretary. Spicer has certainly made a name for himself during his short tenure as press secretary and, if he is indeed replaced, press briefings will likely certainly take on a markedly different tone and character.