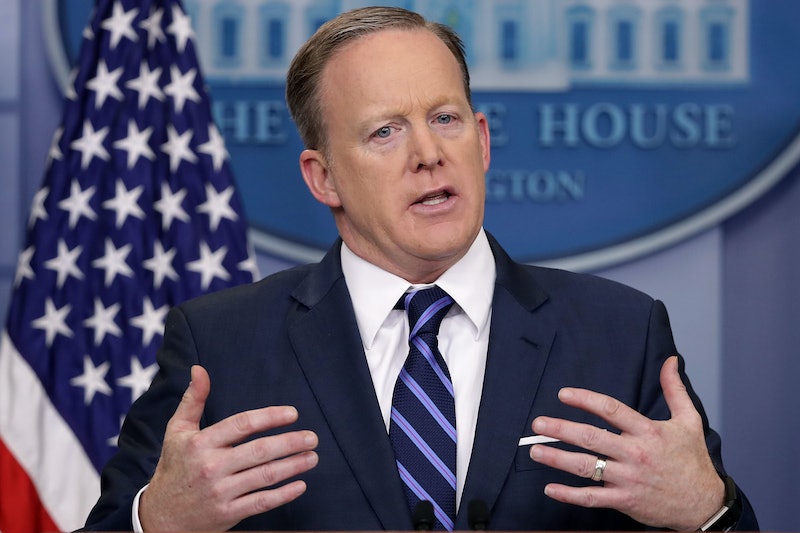 Another press conference, another foot-in-mouth moment by White House Press Secretary Sean Spicer. This one came on Tuesday, when he made a bizarre comment in which he tried to highlight the awfulness of Syria's regime by stating that Hitler never used chemical weapons. The comment came during a critique of Russia's continuing support of the Assad regime, particularly after the recent chemical attack on Syrian civilians that left dozens dead and triggered President Trump to approve retaliatory missile strikes on a Syrian airbase:

We didn't use chemical weapons in World War II. You know, you had someone as despicable as Hitler who didn't even sink to using chemical weapons. So you have to, if you are Russia, ask yourself: Is this a country and a regime that you want to align yourself with?

Reporters in the room swiftly pointed out that Hitler did indeed use chemical weapons — in the form of gas chambers — to kill millions of people. His effort to explain himself only served to make his original comment even worse.

"He was not using the gas on his own people the same way that Assad is doing, there was not in the — he brought them into the Holocaust center," he said. "But I'm saying that in the way that Assad used them, where he went into towns, dropped them down into innocent — into the middle of towns."

The clip of his comments immediately went viral on the internet and prompted an apology from Spicer. "In no way was I trying to lessen the horrendous nature of the Holocaust," he said in a statement. "However, I was trying to draw a contrast of the tactic of using airplanes to drop chemical weapons on innocent people."

A second version of the same statement was quickly released, with the words "innocent people" changed to "population centers."

Given that Spicer's original intent was to highlight the reprehensible nature of the Syrian chemical attack on innocent victims by suggesting that such an act was too vile even for Hitler, his insistence on arguing semantics makes no sense. Is he arguing that transporting millions of people to concentration camps and killing them in gas chambers is less morally reprehensible than dropping chemical weapons "into the middle of towns"? If not, then his original argument suggesting that Hitler possessed a stronger moral compass than the current Syrian regime is a useless one.

Saturday Night Live will probably have a field day with this one.