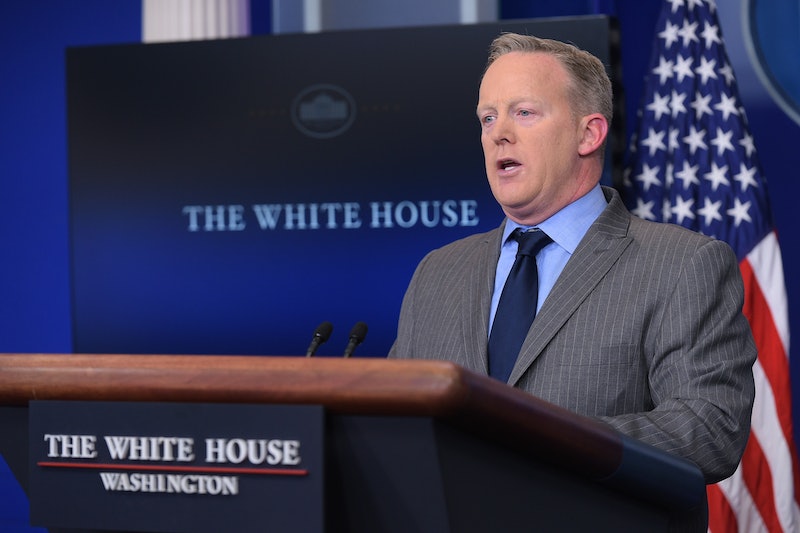 In the first few days of President Donald Trump's administration, White House Press Secretary Sean Spicer and Trump's counselor, Kellyanne Conway, have already fueled some fiery debate over "alternative facts" and what they actually mean. But what you may have missed while paying attention to that news was Spicer's heated Twitter history with Dippin' Dots.

Yes, I'm taking about the ice cream company. It turns out that Spicer has some opinions about the "ice cream of the future" — mainly, that it's not. Incredibly, Spicer has a long history talking about the brand, which includes five years of tweeting about his displeasure with their tiny beads of flavored liquid-nitrogen-frozen ice cream.

Learning of this one-sided feud brought many questions to my mind. How did this hatred begin? Why has Spicer only used one specific insult against Dippin' Dots? What compels him to continue using Twitter as the platform to call out the company? Why has he never tagged Dippin' Dots in the tweets? So I decided to investigate, and am ready to present my findings to you, the people, about how sure Spicer is that Dippin' Dots is not the ice cream of the future. Here we go.

It was back in 2010 that the world was first informed of Spicer's feelings about Dippin' Dots. (That we know of — perhaps he complained about the ice cream to friends or acquaintances before Twitter was invented.) Notice the all-caps "not," implying that not one part of Spicer thinks that Dippin' Dots might be the ice cream of the future. There is no other explanation of a motivation behind the tweet, so I'll just have to assume he'd recently had a bad experience with the brand.

Confident Enough To Repeat His Claim

The second time Spicer tweeted about Dippin' Dots, it was only to repeat his aforementioned opinion and solidify his views. This tweet took place more than a year after the first, so maybe he managed to avoid it during that time and then was reacquainted with the unpleasant dessert.

Honestly, without any type of anecdote or reasoning behind his previous tweets, Spicer must have known that he needed some type of news to back up his claims. The vindication came a month after his second tweet, when the Wall Street Journal published a piece about Dippin' Dots filing for bankruptcy. This time, he switched up the insult a bit and went with "Ice Cream of the Past." At this point, he is very confident that Dippin' Dots is not the ice cream of the future.

Definitely Sure Via Anecdotal Evidence

After four years of silence, Spicer was back to hit Dippin' Dots with one more tweet, this time giving us a little context. I'm guessing he was at a Nationals baseball game when they ran out of vanilla-flavored ice cream, and this was the final straw. Many of my original questions are unanswered, but at least we know that truly, this is the tweet of someone who does not believe Dippin' Dots is the ice cream of the future.