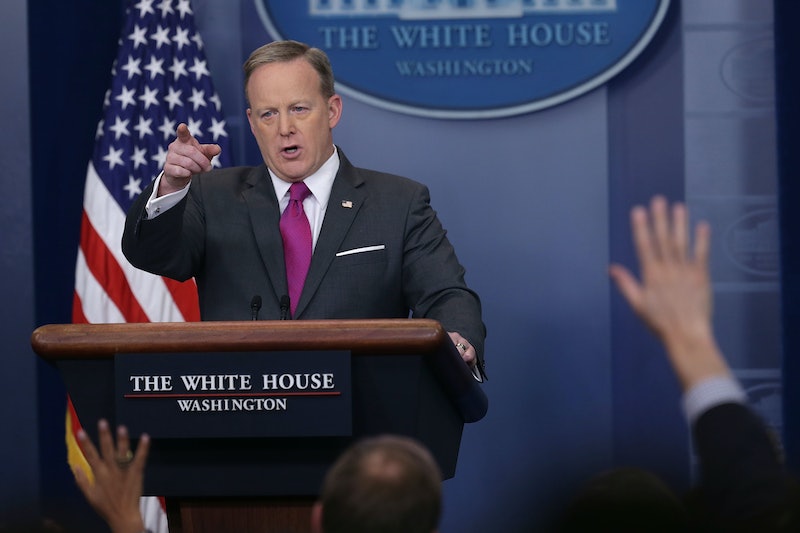 Just when you thought the world of politics couldn't get more surreal, the line between reality and fiction blurred even further at the White House on Friday. Sean Spicer accidentally referenced House of Cards by wearing his American flag pin upside down during a White House press briefing, sending the internet into a frenzy about the potential hidden meaning behind the symbol. Though Fox News reporter John Roberts quickly pointed out Spicer's mistake, the gaffe was visible long enough to remind everyone how much this administration feels like a political thriller instead of an actual presidency.

For those who aren't fans of the show, House of Cards follows the political careers of Frank and Claire Underwood (let's be real, Robin Wright is the real star of the show) as the power couple plots their underhanded ascension to the presidency. I won't give any specific spoilers, but the Underwoods and their cronies use extreme means to rule the government through intimidation and media ploys (the show takes it really far, but that still sounds familiar right?). Spicer's "reference" comes from the show's logo, which portrays the American flag upside down as a reflection of the show's deconstruction of national political institutions.

To be clear, it's very, very unlikely that Spicer was actually referencing the show, but there are some striking comparisons between the Underwood administration and the Trump administration that people latched onto pretty quickly online. "Fingers crossed I wake up one morning and it was all just an episode of #HouseofCards," tweeted one commenter.

The official House of Cards Twitter account even joined in on the fun, telling Spicer that "[his] loyalty has not gone unnoticed." The show also acknowledged the troubling similarities when it ominously announced the Season 5 premiere date on the day of Trump's inauguration. In some ways, the show is even tamer than real life because the Underwoods take pains to maintain an air of presidential respectability that Trump lost long ago, despite winning the presidency.

Outside of the show, the symbol of the upside down flag apparently has a different meaning. According to Title 4 of the U.S. Code, the upside down flag is intended to serve as "a signal of dire distress in instances of extreme danger to life or property." Hopefully, that's information you'll never need to know, but it definitely contributed to some quality jokes online. "DISTRESS SIGNAL?? Sean Spicer's American flag lapel pin is upside down. What does he know that we don't??" tweeted WGN reporter Ben Bradley.

If you haven't watch House of Cards yet, there's still enough time to catch up before Season 5 comes out in May, and it might even provide a nice break from the real world of politics right now. Or maybe this is just more evidence that the world is really just a computer simulation.