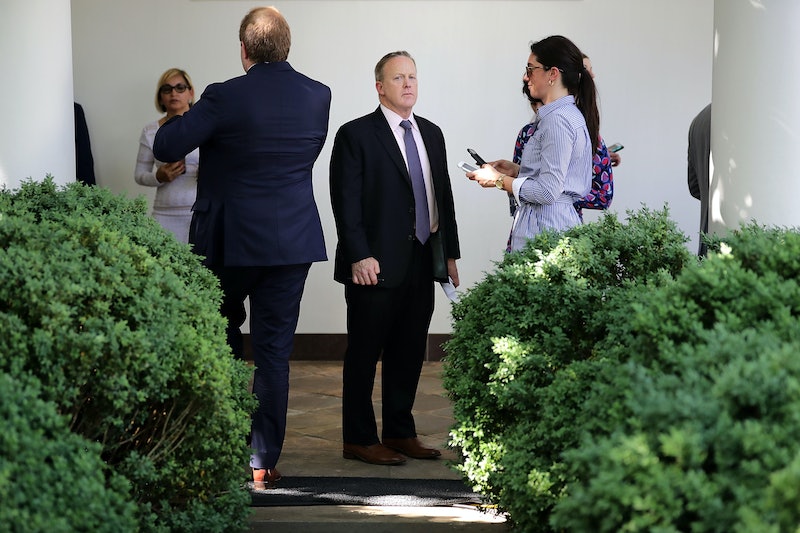 There's one story in particular that seems to follow Trump's former press secretary anywhere he goes. And finally, he's clearing the air on it. Apparently, Sean Spicer's "hiding in the bushes" meme isn't what it looked like, according to an interview he did with Rolling Stone. The topic came up when Tessa Stuart asked Spicer if there were media reports about him that were inaccurate. "The one that really sticks out is obviously the whole story of me, quote, 'hiding in bushes,'" he admitted.

It's a long story when you read Spicer's rather belabored explanation. He explained, "At the end of the White House driveway there's a place where all the media does their live hits. Everybody's got a little space — NBC, CBS, FOX, Sinclair. Every single reporter that's reporting live from the White House, they're within five feet of where I stood."

The media reports of him "hiding" in the bushes were not true, Spicer said. "There is literally video and pictures of me standing in the middle of the White House driveway," he told Stuart. "That's where I was. And there is no question. I was as close to a bush as any other reporter that night."

Last year in July, various media websites reported that Spicer was "hiding" by the White House driveway bushes amid questions about former FBI Director James Comey's dismissal. In one instance, Business Insider described Spicer as "huddled near bushes" during the press' questioning.

Of course, when the story came out, the internet took to meme-ing Spicer's existence. From Homer Simpson desperately trying to blend in with his leafy verdant background in The Simpsons to people Photoshop-ing Spicer into former President Barack Obama's painted portrait, the internet went wild.

In fact, here's one version of the same portrait.

And here's another version of the same painting. Spicer may have tried to forget what happened last year, but it looks like the internet's memory endured.

Spicer said that it was "lonely" up there at the podium amid media reports about his own statements. He told Stuart that he occasionally talks to Trump based on "whenever he wants." He also opened up about former White House Communications Director Anthony Scaramucci, who was fired within 10 days of his appointment. Spicer, who had severe issues with Scaramucci and resigned upon his hiring, said that he wasn't giddy about his dismissal but that "it highlighted the importance of actually having a skill set to do the job."

You might want to know that Spicer actually does have have some regrets about certain things he said while he was serving as the White House press secretary. The thing is, he didn't specify exactly which of his gaffes were retrospective problems for him. There were several.

Was it when he said, "If the president put Russian salad dressing on his salad tonight, somehow that's a Russia connection," or when he said, "The president and a small group of people know exactly what he meant [by 'covfefe']," or when he infamously told the press, "You had someone who was as despicable as [Adolf] Hitler, who didn't even sink to using chemical weapons"? Still, when asked by Stuart if he ever regretted any of his words, a candid Spicer said, "Oh, f*ck yeah. Absolutely!"

At the end, Stuart asked Spicer if he yearned to go back to his position, if he ever missed being up there, talking to the press, representing the White House. Spicer gave her a definitive and singular "no." He said he missed his colleagues but "it is an unbelievably intense and lonely job."