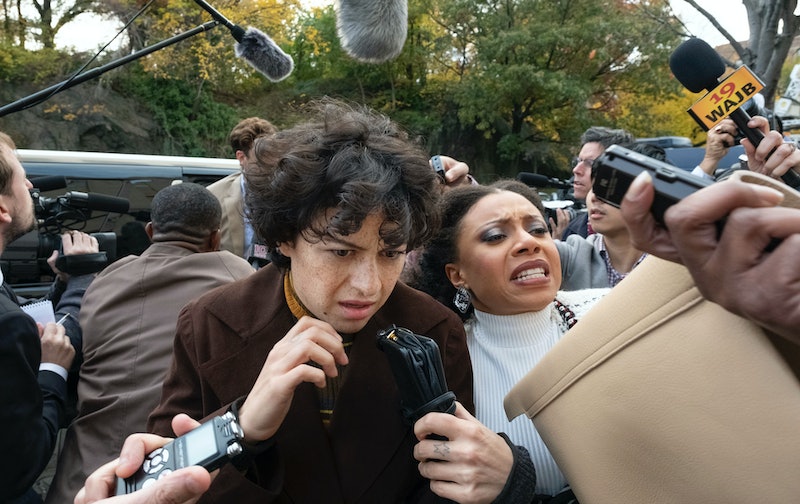 Light spoilers ahead for Search Party Season 3. From its twinkling, Purity Ring theme song to its hip millennial cast, Search Party is both aimed at and critical of its core audience by design. Since Season 1, Search Party has focused on the machinations of a group of self-absorbed Brooklyn 20-somethings, and the show's send-up of their flaws becomes even more pointed in Season 3, premiering June 25 on HBO Max. After Dory (Alia Shawkat) and co. became embroiled in a murder plot, they've attempted to save face and cover their tracks. But while audiences may have rooted for the foursome to get off scot-free in previous installments, Search Party Season 3 reveals that these rich, privileged, 20-somethings are not about to get away with murder, even if they think they can.

It's easy to hate on Dory and Elliott (John Early), because they're the most obviously narcissistic members of the group (the former grows more depraved this season, while the latter's wedding theme is literally "attention"). Portia (Meredith Hagner), meanwhile, is too gullible and eager to please people to extract herself from the situation. While Drew (John Reynolds) is seemingly the inoffensive, bumbling idiot, Season 3 reminds us just how culpable he is, too. Not only did Drew ultimately kill Keith in Season 1, but he tried to frame his boss for a sex scandal in Season 2 in order to flee the country.

No one hates Drew and Dory more than prosecution lawyer Polly (Michaela Watkins), who declares them to be "everything [she hates] about young people — rich, beautiful, corrupt." The attorney is determined that these affluent 20-somethings get what they deserve. "If we allow these two morally repugnant abusers of privilege off, well, you know what you're doing?" Polly tells the jury in her opening statement. "You're letting an entire generation off." In a way, she's speaking to the audience, reminding us that despite the tendency to root for the protagonists of the story — especially when they, too, still view themselves as victims — that makes us culpable, too.

While the no-nonsense lawyer sees the two defendants more clearly, the trial soon becomes a public sensation, with Drew and Dory becoming celebrities. Much like media frenzy around the murder trials of O.J. Simpson or Casey Anthony, Drew and Dory's case is decided in the court of public opinion. Neither the defendants' critics nor fans hold back online — Dory is labeled a slut, while her ex-boyfriend is painted as a handsome, loyal partner who soon amasses a following of lovestruck women who nervously bring pasta to his door.

The attractiveness of both Drew and Dory is brought up several times during the season, which certainly helps their public image. But you can't help but wonder how their trial could have gone differently if they had been less privileged either racially, economically, or both (three of the core four cast members are white; both Alia Shawkat and her character Dory are Iraqi, though present as white). Search Party knows this, too. In Episode 2, Drew's (white) father assures his son that "America has the best justice system in the world. They don't put innocent people in jail."

Of course, the audience knows that it happens all the time — particularly with Black people, who are disproportionately incarcerated — and that's the brutal joke of it. Indeed, it seems almost prophetic that Search Party Season 3 would tackle the corruption of the legal system, considering the recent protests against police brutality — the perpetrators of which are often not charged for their crimes.

Knowing all of this, it's no accident just how fortunate these two defendants are. Every time a seemingly irrefutable piece of evidence turns up, they're able to explain it away — almost like the system was built for them, because it was. After a particularly damning piece of evidence is ruled inadmissible, Dory's lawyer, Cassidy, tells her, "You are so friggin' lucky." Lucky is one word. Entitled is another.