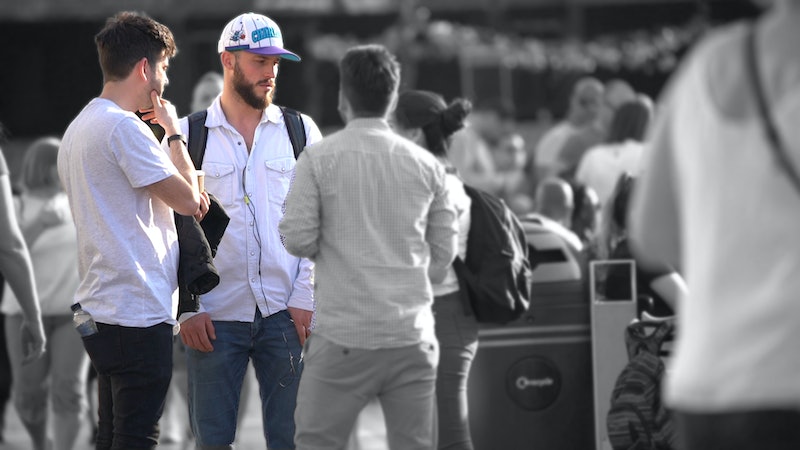 'Secrets Of The Seduction Bootcamp'/BBC

Panorama's newest documentary will follow one BBC journalist as he attempts to expose a fairly unknown but hugely lucrative industry that sees so-called "pick up coaches" teach men how to approach women in the street. But who is Myles Bonnar, the Secrets Of The Seduction Bootcamp reporter, and what more is there to learn about him?

Bonnar is a Scottish journalist and producer who, according to his Twitter, currently works on projects for BBC Scotland News and The Social, a BBC podcast. He is also involved with another BBC podcast, Podlitical and has previously worked as a producer on The Collective, which saw different people from all different walks of life come together in discussion.

If you're in the market for some new people to follow on social media, I'd recommend hitting the follow button on Bonnar's Twitter page. His feed is full of interesting work-related tweets and news about Secrets Of The Seduction Bootcamp with a sprinkling of pop culture and hilarious gifs.

According to one of his tweets, Bonnar started his journey to making Secrets Of The Seduction Bootcamp began a year or so ago:

In an article discussing the guilty charges, The Scotsman revealed that Ahmed hails from Maryhill in Glasgow. As the newspaper explains:

"The 38-year-old ... approached five girls between May 2016 and November last year in Glasgow City Centre and Uddingston. Using the name ‘Addy A-Game,’ Ahmed posted the videos on Youtube of him approaching females to teach others about how to pick up women. The clips also included audio recorded during sex. Ahmed was found guilty for acting in a threatening and abusive manner cause a reasonable person fear or alarm."

According to The Sun YouTube have since deleted Adnan's account as it was found to be in violation of their policy on nudity and sexual misconduct. Another account, Street Attraction, which offered "boot camps" for picking up women, was also deactivated, the newspaper reports.

Secrets Of The Seduction Bootcamp will act as a kind of follow up from Bonnar's first report on Ahmed. According to Daily Mail, Bonnar will be working undercover and taking part in a class run by Street Attraction coach Eddie Hitchens. The class is called "Game" and reportedly cost £600.

As Bonnar wrote for the BBC:

"'Game' is a multi-million pound business where men teach other men how to pick up women. There's nothing new about men trying to pick up women. But in this digital age seduction coaches are selling courses online on how to bed as many women as possible, as quickly as possible."

The Sun reports that in one moment in the documentary Bonnar refuses to approach a teenage girl, saying "she’s too young for me man," to which Hitchens says it "doesn’t matter," stating: "Even if she’s underage it’s not illegal to stop someone... that was a good target." To see this and other moments from Bonnar's experience with the "pick up coaches," you can watch Secrets Of The Seduction Bootcamp on BBC's Panorama at 8.30 p.m. tonight (Monday Oct. 7).