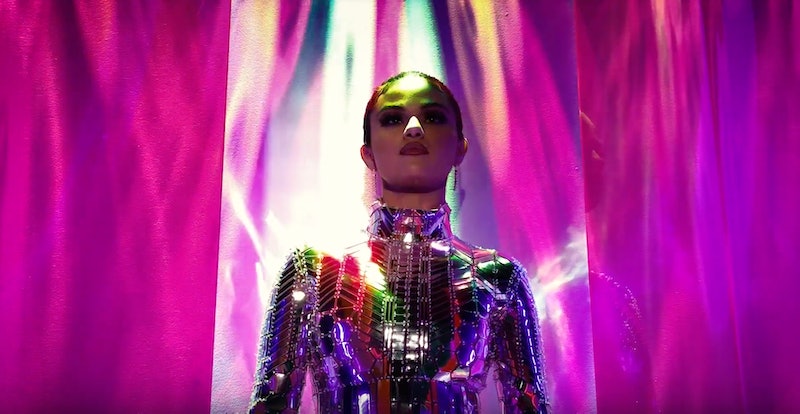 Look at Selena Gomez now. She went from quietly working on her music to dropping two hit singles in two days. On Wednesday, Oct. 23, Gomez dropped "Lose You to Love Me," and just one day later, she surprised fans by giving them more new music with an important message — and an even more confident attitude. Selena Gomez's surprise new song "Look At Her Now" shows that's she's totally moved on from the drama of her past relationship with Justin Bieber.

"Look At Me Now" plays like a strong, self-assured sequel to the raw and emotional "Lose You to Love Me." Gomez retells the story of a breakup in the verses, with cutting lyrics like “Fast nights that got him, that new life was his problem." Although she's singing in the third person, fans think she's hinting toward her rollercoaster relationship with Bieber, which they also believe influenced "Lose You to Love Me." But the chorus shows how much she's moved on, with a fierce and utterly catchy chant. "Of course she was sad, but now she's glad she dodged a bullet," she sings.

In a press release obtained by Bustle, Gomez explained why she wanted to release these two songs so closely together. “I felt having these two songs released back to back completed the story of how one can rise no matter what challenges life brings," she said. "Turning off the noise and living your life on your terms."

After the surprise release of her new track, Gomez went on Instagram Live to talk about her new music. But first, she appeared to address Hailey Bieber's supposed shade (which the model said was not a comment about Gomez) by telling fans not to send anyone hateful comments. "I am so grateful for the response of the song. However, I will never stand for women tearing other women down," she told fans who were watching live on Instagram. "So please be kind to everyone."

Although she doesn't mention the Biebers by name, Gomez made it clear to fans that she won't tolerate hate being sent anyone's way, even if it's in defense of their idol. “It doesn’t matter what the situation is, if you’re my fans don’t be rude to anybody, please,” she said. “Don’t go off and say things that you just feel in the moment. Please, for me, know that that’s not my heart."

Regardless of the drama with the Biebers, Selenators are absolutely loving the one-two punch of "Lose You to Love Me" and "Look At Her Now." In fact, many of them have already tweeted humorous admirations for Gomez's ability to switch from vulnerable to confident in a flash.

Hopefully, the story told in her new singles will be completed with a new album, but only time will tell if that arrives.

More like this
Adam Levine & Behati Prinsloo Welcome Their Third Child Together
By Jake Viswanath
Meghan Trainor & Daryl Sabara Are Expecting Their Second Baby
By Jake Viswanath
Hilary Duff's Husband Matthew Koma Has Her Name Tattooed On His Butt
By Jake Viswanath and Stephanie Downs
Selena Gomez Confirms She's Single Amid Drew Taggart Dating Rumors
By Martha Sorren, Jake Viswanath and Jack Irvin
Get Even More From Bustle — Sign Up For The Newsletter
From hair trends to relationship advice, our daily newsletter has everything you need to sound like a person who’s on TikTok, even if you aren’t.