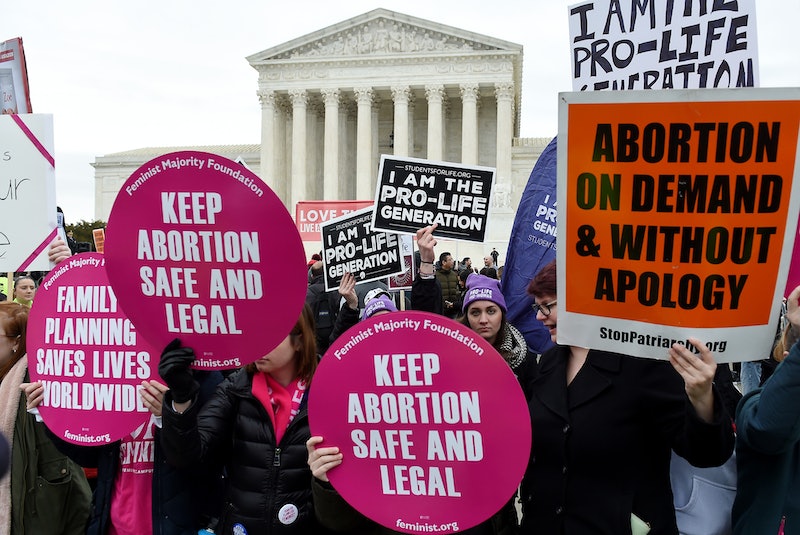 As abortion restrictions across the country seemingly grow by the day, self-managed abortion is over three times as prevalent in Texas than the rest of the country, according to a January study released by the University of Texas at Austin’s Texas Policy Evaluation Project (TxPEP). Researchers surveyed over 700 people seeking abortions between 2012 and 2015, and found that 6.9% either tried folk methods — like teas, herbs, vitamins — or obtained abortion-inducing medication. (The national rate is 2.2%.) The women researchers interviewed said that they traveled to Mexico to obtain the medication over the counter, as it's only available under a doctor's supervision in the United States. The study found that in most cases, the medication worked, but other home remedies weren't very effective — and could be dangerous. Nearly all respondents said they would have preferred to have an abortion in a clinic.

“If you simply cannot pay for a medical service that you need, then you try to figure out [another] way you can get that medical service,” says Liza Fuentes, a senior researcher at the Guttmacher Institute and co-author of the study.

But for some people, self-managed abortions may be preferable, says Abigail Aiken, an assistant professor in public affairs at The University of Texas at Austin. (She has no relationship with the TxPEP study.) In 2018, Aiken authored a study about patients seeking information online for self-managed abortions. She found that patients in both abortion-restrictive and abortion-accessible states sought information online. “They want the privacy of being at home, or they just prefer to take care of things themselves,” Aiken says.

I don't think there'll ever be one type of abortion care that's right for everybody.

Aiken began the study by looking at the success of telemedicine in Ireland, community-based medicine on the Thailand-Burma border, and pre-abortion care in Peru. Medical advances mean that a self-managed abortion can be extremely safe and effective, she says, if a patient has access to the right medicine and information.

The two drugs used for inducing a medication abortion are misoprostol and mifepristone. The TxPEP study cites misoprostol, which, when used in conjunction with mifepristone, can induce an abortion by breaking down uterine lining. Misoprostol can be effective at ending pregnancy on its own, says the World Health Organization; because misoprostol is also used for managing ulcers, it's often easier to obtain than mifepristone, which is solely used to induce abortion. Only certified healthcare providers can prescribe the latter, which is regulated under an FDA program called REMS, or Risk Evaluation and Mitigation Strategies.

“We already have the scientific evidence that you don't need a doctor to watch you swallow these pills,” Aiken says. “If you have good instructions, you're able to take them at home by yourself.” Of the patients who used misoprostol in the TxPEP study, most reported safely ending their pregnancies, whereas respondents who used non-medication based home remedies were not successful at all.

Ultimately Aiken wants self-managed abortions to be safer and more accessible. “I don't think there'll ever be one type of abortion care that's right for everybody,” she says. “We'll always have a spectrum of what people want. There's something uplifting about the idea of people thinking about it as a preference."

Even though researchers like Aiken are hopeful for increased accessibility to at-home abortion, the reality is that some states still try to criminalize or prosecute self-managed abortions. The advocacy organization If/When/How: Lawyering for Reproductive Justice knows of around 21 American cases of people being prosecuted for self-managed abortion since 2000, though most were dismissed or overturned. According to Sara Ainsworth, the organization’s legal and policy director, prosecutors in these cases often use old, unrelated laws, like anti-feticide laws, to "punish pregnant people directly."

Ainsworth stresses that these cases are rarely held up in court, but that overturning Roe v. Wade might lead to more overzealous prosecutors trying their luck. That’s what happened to Purvi Patel, an Indiana woman sentenced to 20 years for feticide in 2015 after she induced an abortion with medicine purchased online. (Patel’s most serious conviction was overturned the following year by the Indiana court of appeals, and a judge ordered her release.)

If/When/How offers a national helpline, which gives legal advice for self-managed abortions. Most people who call aren’t facing prosecution, Ainsworth says, but are worried they could. Some people call asking if abortion, generally, is illegal. The answer? Legally, no. But their confusion is justified. As Patel's case shows, society doesn't welcome self-managed abortions with open arms, at least not yet.

Editor's Note: This piece was updated on Feb. 3, 2020 to reflect the total number of subjects in TxPep study.