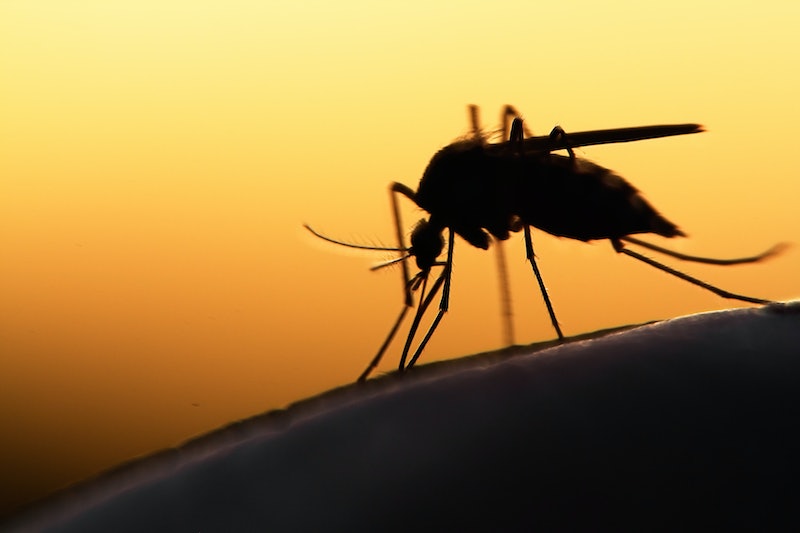 While people are often criticized for taking too many selfies, in this case selfies may have saved a life. According to a case study from The New England Journal of Medicine, a series of selfies helped a woman identify a parasite in her face. Ready to be horrified? According to the report, the woman sought medical attention after spending two weeks documenting a bump that seemed to be moving around her face underneath her skin. And that bump turned out to be a hella long parasitic worm.

"She had first noted a nodule below her left eye. Five days later, it had moved to above her left eye, and 10 days after that to the upper lip," Vladimir Kartashev, M.D. and Fernando Simon, Ph.D. wrote in the case study. The bump was accompanied by intermittent itching and burning, but she reportedly had no other symptoms, unless you count her skin crawling — literally.

The doctor identified the moving object under her left eyelid and was able to remove it surgically. The parasitic worm, known as Migrating Dirofilaria repens, is transmitted by mosquitos and though it's most commonly seen in animals, it can infect people too. In this case, it's thought that she may have contracted the worm on a recent trip to a rural area of Russia. The good news is that the parasite is unable to reproduce in humans. The bad news is that getting it means you have a worm living under your skin.

Seriously, seeing an object move around inside of your face might make you think you're going bananas (and there is actually a disorder called Ekbom Syndrome that causes people to believe their bodies are infested with bugs. However, by documenting the parasite in a series of selfies, this woman was able to get the appropriate treatment and make a full recovery after it was removed.

While it's rare for this type of parasite to infect humans, it's more common than you think. The journal Emerging Infectious Diseases reported that a German man went to the doctor for speech problems and an object moving under the skin of his arm after nine months of traveling in southern India and Sri Lanka. It was eventually discovered that he had contracted Dirofilaria repens, which was causing inflammation in his brain.

Once the parasite was removed, the man recovered rapidly. People in Europe, Africa, and Asia are more likely to contract Dirofilaria repens, which is transmitted through mosquitos. But, because human infection is so rare, it can be hard to diagnose.

The Centers for Disease Control noted on its website that adult females can grow up to a foot long, and the parasite can live in its host for up to 10 years. If you have traveled to Europe, Africa, or Asia, and you see something moving under your skin, it's best to get it checked out because the CDC confirmed that this type of parasitic infection "manifests as either a wandering worm in the subcutaneous tissue or granulomatous [inflammation] nodule."

What's worse than having a parasitic worm crawling around your face for two weeks? How about getting labeled as bananas for thinking such a thing could be possible. "The parasite can appear and disappear in few minutes," Dr. Kartashev, a professor of medicine at Rostov State Medical University who saw the patient, told CNN in an email. "Doctors who are not familiar with the disease don't believe ... the patients. That's why I asked the patient to make selfies."

If you've seen the Criminal Minds episode "The Itch," then you might have some idea of what a person infected with Dirofilaria repens is going through. This is where those selfies can help. Because your doctor might write off your creeping-skin sensation as Ekbom Syndrome, documenting the journey of the parasite as it travels under your skin can provide the proof you need to get treated faster — assuming you haven't already passed out in horror at the sight of your skin moving.