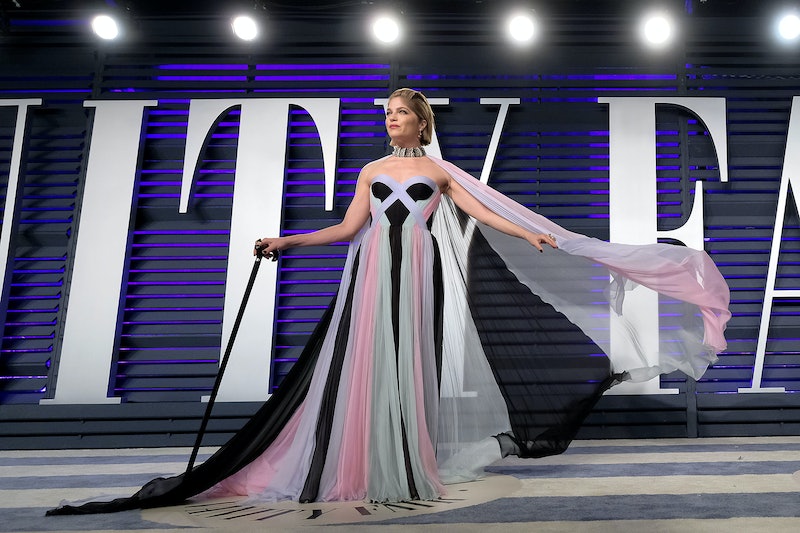 The significance of actor Selma Blair stepping out onto the red carpet at the 2019 Vanity Fair Oscars party, in a dramatic, flowing, multi-colored Ralph & Russo gown and cape — colorblocked in black, lavender-blue, mint green, and soft pink, held on with a glimmering choker collar — and her black customized cane, completed with a real pink diamond, can best be summarized by Blair herself: “Holy sh*t," she told Vanity Fair. "There’s a need for honesty about being disabled from someone recognizable.”

In her first public appearance since publicly disclosing her multiple sclerosis (MS) diagnosis, Blair instantly became a disabled icon. As the camera’s bright lights flash around her, Blair was the image of elegance. I watched her with her head held high, her cape flowing around her, her cane in hand, and meeting the cameras with her eyes, perfectly posed. Then, as if breaking character, she stopped posing, took a step back, and began to cry; her manager, Troy Nankin, came over to her and helped wipe her tears. She held onto his arm while she gathered herself, saying, “It just took so much to get out.”

There I was, a disabled woman living in my parents’ house in Maine, in flannel pajamas and slippers, not a speck of makeup on my face, my thinning hair held back in a headscarf, with my $12 cane I’d gotten off Amazon, watching her on my laptop. There she was, blonde hair slicked back, a stunning gown with solid sweeping lines, offset by the drama of the sheer cape, a real damn diamond on her cane, her perfect makeup somehow flawless even after wiping away tears, surrounded by photographers calling her name — and it was one of the most relatable moments I have ever seen on a red carpet.

Like most American women my age, I knew Selma Blair. Not personally, but in the way we know celebrities, from movies and magazines. I was maybe 10 the first time I saw Legally Blonde, and 13 the first time I saw Cruel Intentions. I know her face; I recognize her voice. To see her — a recognizable celebrity I've known and thought of as eminently cool since girlhood — embrace her disability so wholly was incredibly meaningful for me. I watched someone with so much visibility lean on a cane proudly while displaying grace and beauty, while the photographers clamored for her attention. I felt seen in a way that is painfully rare in the chronic illness and disability world.

Fatigue and an ungodly exhaustion are a part of many chronic illnesses. When energy becomes a limited resource, one must become adept at budgeting it wisely — using “spoons,” a metaphor writer Christine Miserandino came up with to explain living with lupus, to use energy when you have chronic illness. (Spoon theory goes: Once you’re out of spoons for the day, that’s it.) Blair decided to use her spoons to go out, to try and do what her body would let her do, while photographers took a few hundred photos of her — all while she was in the midst of a flare (or an exacerbation of a chronic illness). She didn’t just make an appearance; she showed up and showed out for disabled people, and for herself. The amount of precious energy it must have taken to go out cannot be understated.

“I was scared to talk, but even my neurologist said no, this will bring a lot of awareness because no one has the energy to talk when they’re in a flare up,” Blair said during an interview with Robin Roberts that aired on Feb. 26, the day after the Oscars. “But I do.” She puts on a facetiously dramatic tone of voice and facial expression, and slightly shimmies her shoulders for emphasis. “‘Cause I love a camera.”

Her interviews since her appearance on the red carpet have done even more to bring some much-needed awareness to chronic illness and disability issues. Not only has she spoken about her specific symptoms like severe fatigue, spasmodic dysphonia, and balance issues — issues many other disabled people (including myself) have dealt with — but she also spoke out about the difficulty of getting a diagnosis. Many women with chronic illness can be sick for years until they’re finally taken seriously and diagnosed. Blair told Roberts she went for years without being believed and therefore, without being treated. Blair also spoke of the lack of fashionable canes and accessible clothing (“dressing is a sh*tshow,” she quipped to Roberts), which is a problem I and other disabled folks are all too familiar with. She announced plans to release a line of accessible clothing and fashionable canes in the future. “Let’s get elastic waistbands to look a little bit better,” she joked on the Nightline interview.

The embarrassment around unfashionable mobility devices and the limited selection of stylish accessible clothing has long been a problem for many disabled folks. My first wheelchair was a clunky hospital wheelchair, not meant for daily use, and difficult to maneuver gracefully in. My first cane looked equally medical, impersonal, and clinical. When I’ve had to go out — to weddings or other occasions — and the event required I be in pictures, I often would go to the trouble of standing, holding on to a wall or the person next to me, and tossing my cane out of the shot. Too often, I went to the trouble of hurting myself, risking falling, or using enormous amounts of energy just to not have my mobility device in my shot, so as to not “ruin the photo.” The first time I did it, it was because I was asked to; and every other time was because I had been asked that first time. Internalized ableism is so hard to overcome partially because those beliefs are so often reinforced in society.

Blair decided to reject the stigma, instead opting to let her mobility device shine. She has continued to do that in other coverage — one photo in her Vanity Fair feature shows off a stylish horse-head cane, its designer, Asprey, named just like any other part of her outfit—as it should be.

Other things Blair is rejecting? The notion that being sick means we cannot work. She’s rejecting pity, and rejecting the “tragedy” narrative that so often is forced on those who have received a diagnosis. In her interview with Vanity Fair, she tells them, “there’s no tragedy for me. I’m happy, and if I can help anyone be more comfortable in their skin, it’s more than I’ve ever done before.” She’s still working, and is honest that she sometimes has to work around her illness. To then see her admit that she too sometimes falls or drop things is encouraging, and to do so so publicly helps both to spread awareness and to encourage those in similar situations. But this is just the beginning: Hopefully, we will continue to see more disability representation from a wide variety of disabled folks, of all disabilities, races, sizes, gender identities, sexual orientations, and ethno-religious backgrounds, so everyone will be able to see themselves represented.

There are questions about how we consume media regarding disability. The word “inspired” is reviled by many in the disability community, who often are the subject of pity or undue praise merely for existing. But disabled people don’t exist to make abled people feel better about their abledness. There is a tendency in our culture to turn disabled people into objects of what’s known as inspiration porn. But for many in the disability community, particularly those who use canes, or have M.S. or other similar chronic illnesses, Blair’s public outspokenness on her reality with her illness has been both validating and inspiring. Several people on Twitter commented how they’d been struggling with the decision to get a cane, and Blair was what convinced them.

As for me? I know the next time I’m at an event and take a picture with someone, I won’t be moving my cane out of the shot.

Correction: This story was updated on March 7 to correctly identify Selma Blair's manager.