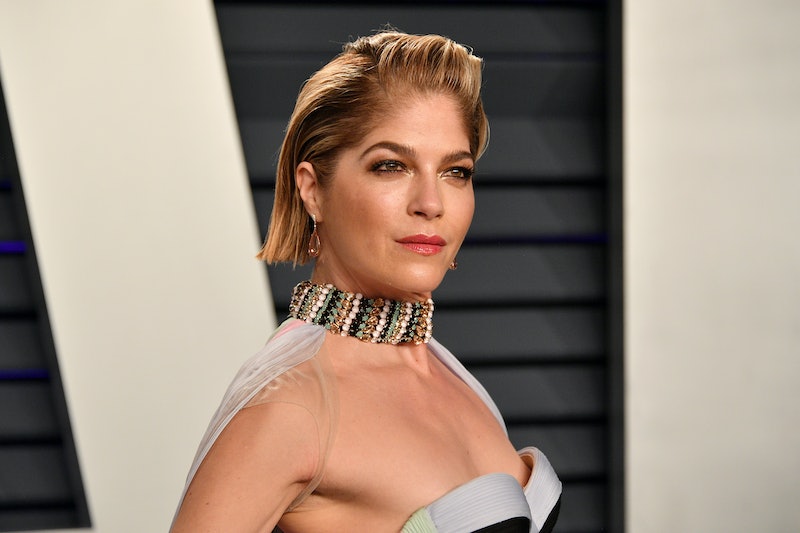 Selma Blair continues to put on a brave face in light of her recent MS diagnosis. Based on one of her recent Instagram photos, she's doing so with one of her biggest supporters by her side. Selma Blair and Michael J. Fox posed for a photo together, which was posted on April 3, per Us Weekly. And the pair's pic is full of nothing but support and positivity.

Blair took to Instagram to share the positive snap, which saw the two actors sporting some bright smiles for the camera. Their Instagram photo was an especially meaningful one, given that the Legally Blonde star has been vocal about the immense support that she's received from Fox in regard to her multiple sclerosis diagnosis, which is a chronic disease that affects the brain, spinal cord, and nerves in the body. The Back to the Future star has dealt with his own battle with a chronic illness, Parkinson's, for 30 years.

Blair captioned the photo of their latest hangout with a kind message for Fox and some surprising background info about the snap's photographer, who just so happened to be Dirty Dancing star, Jennifer Grey:

"I like this man. @realmikejfox .I am not alone in feeling this way. Notice our #underdog shirts. He has #misfits while I have on #badnewsbears . We are all a #timecapsule in this photo. #michaeljfox #selmablair #misfits #badnewsbears #80s #90s #2000s my heart. 💛 mjf... your presence. You. The best. Thank you. And thanks...@jennifer_grey (!!!!!!!) for photo. I just blew your minds. Right?"

As for Fox, he responded to Blair's post with a similarly sweet, and incredibly accurate, note, writing, "You are truly an inspiration."

In late February, Blair opened up about her MS diagnosis in an interview with Good Morning America's Robin Roberts. Her interview came on the heels of her appearance on the red carpet at an Oscars afterparty, which was her first red carpet appearance since she went public with her MS diagnosis in October 2018. During the interview, she explained that she was in the middle of a flare-up of her illness and was experiencing spasmodic dysphonia, which affects her voice.

Nonetheless, the actor was able to continue with the interview in order to explain her personal journey with MS and to raise awareness of the disease. “I am doing very well,” she told Roberts, “I am very happy to see you. Being able to just put out what being in the middle of an aggressive form of Multiple sclerosis is like. So my speech, I have spasmodic dysphonia right now. … It is interesting to be here to say this is what my particular case looks like right now.”

Blair continued to say that she reached out to Fox for advice, as he's a fellow actor in the industry who deals with a chronic illness. She revealed, "I said, ‘I don’t know who to tell, I’m dropping things, I’m doing strange things.’ … he got in touch with me… but like really he gives me hope."

It's clear that Blair and Fox will always be there to support one another throughout their respective, personal journeys. Based on their recent photo together, they're also down to spread some of those positive vibes to their many supportive fans, too.