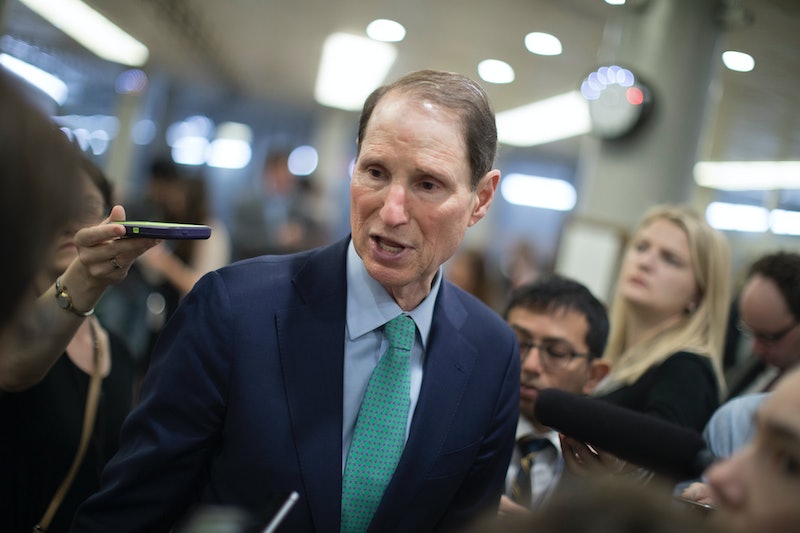 Public and media scrutiny surrounding Donald Trump's son-in-law and White House adviser Jared Kushner continues to gain steam. On Monday, Kushner appeared before the Senate Intelligence Committee to speak about possible collaboration between Trump's campaign and Russian figures during the 2016 election. The meeting was held in private, and Kushner was not under oath, but Kushner is required to tell the truth under federal law. Taking issue with the private nature of the meeting, Democratic senator Ron Wyden demanded that Kushner testify under oath in public.

On Monday, Kushner released a statement saying that he "did not collude, nor know of anyone else in the campaign who colluded, with any foreign government." But this still did not allay Wyden's concerns. The Democratic senator from Oregon released a statement on Kushner's hearing:

It is imperative that the public hear Jared Kushner testify in an open session of the Senate Intelligence Committee, under oath, and support his claims with full transparency in the form of emails, documents, and financial records.

The senator also tweeted: "Kushner’s statement sounds like lawyers protecting a client, not real transparency. Testify in open session." Wyden said that the 11-page statement from Kushner proved to be insufficient insofar as addressing questions about the alleged meetings between him and prominent Russian figures. "Kushner's statement," Wyden said, "which he released publicly to the press, raises far more questions than it answers."

Wyden went on to express his dissatisfaction with the finance-based details in Kushner's statement, and criticized Kushner's statement, saying, "Notably, [Kushner's] comment 'I have no relied on Russian funds to finance my business activities in the private sector,' is clearly the work of a clever lawyer trying to protect his client, not someone trying to clear up questions raised by Congress and the American people."

Wyden demanded transparency regarding Kushner's documents, and said that the senior adviser "has an obligation to be transparent with all relevant documents to back up his claims."

And at the end of the strongly worded statement, Wyden cautioned against believing Kushner's version of events, including the controversy that was caused by his initially incomplete SF-86 form.

"Kushner has repeatedly concealed information about his personal finances and meetings with foreign officials," Wyden said. "There should be no presumption that he is telling the whole truth today."