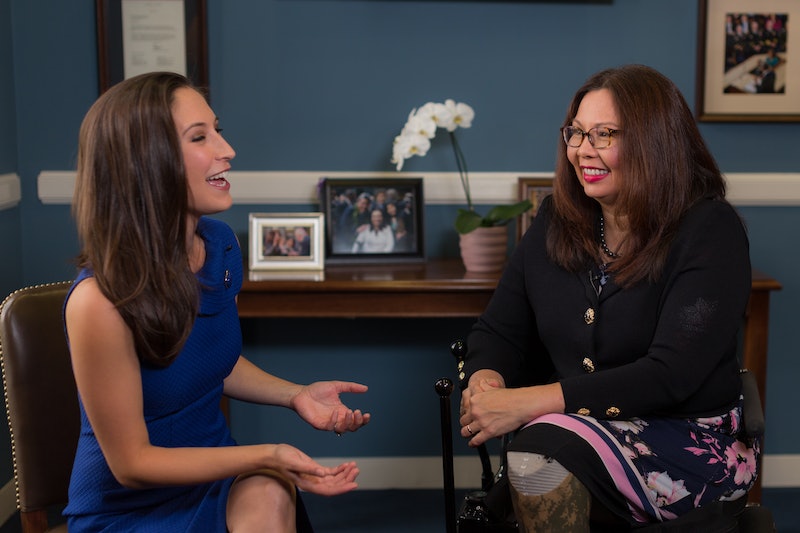 Democratic Sen. Tammy Duckworth's husband keeps trying to throw away this one T-shirt — the one that reads "lucky for me, he’s an ass man” — whenever she's not looking. (It's not one of his favorites, no.) For Duckworth, the Illinois Senator with several lifetimes worth of experience under her belt, the shirt is just part of the infamous sense of humor she brings to every part of her extraordinary life.

In a conversation at her Capitol Hill office with Bustle, she touched on her life in the military, her experiences as the first Thai-American Senator, the first female helicopter pilot to lead a combat mission, and the first female double amputee (the fifth female amputee overall) of the Iraq war. Whether she's talking about her own personal story, those of her constituents, or her complicated feelings about President Donald Trump and his policies, she's still willing to laugh about it all.

Duckworth credits her military background — particularly her time at Walter Reed Army Medical Center in Washington (which she's playfully called the “amputee petting zoo" in several interviews) — for that wicked sense of humor. She explains that she sometimes does have to double-check her filter at work. But then again, don't we all?

"Well, definitely there’s dark humor in the military, and it’s very profane humor, as well, and so sometimes when you’ve got nothing else ... " Duckworth says. "Here I have to tell myself a lot, was that inside my head or did I say that out loud?"

While Duckworth wielded her wit throughout the interview to address her stances on everything from American policing and newly confirmed FBI Director Christopher Wray to President Trump's transgender military ban and chasing his tax returns, she naturally made some time for a bit of fun too. Challenged with the task of completing a few playful sentences, Duckworth gave us a taste of the real Tammy who's an athlete, a child of the '80s, and an impressively thrifty online shopper.

Duckworth also discusses the best part about her job, which is, undoubtedly, being able to meet the people. Leaving no constituents behind, she's been doing Town Hall meetings in districts "where the Republican congressman are refusing to do town halls."

I show up and people really are very appreciative that I bother to show up.

"I find value in it and I find that people appreciate that you show up, even if they may not agree with you," she explains. " ... Many of these are very conservative areas that President Trump won, but I show up and people really are very appreciative that I bother to show up."

On the other end of the spectrum, the worst thing about her job is that it takes her away from her two-and-a-half year old daughter. But, not to worry — she adds that on the weekends the two have the chance to catch up. And if she's not out and about with her daughter, she's probably getting in touch with her inner-introvert because she's "a grab a book and curl up on the couch kind of gal" at heart.

There's something else you — and a lot of other Americans — might not know about her. She's an athlete. When she was younger she was a competitive discus thrower and she still participates in marathons today.

When she's workin' on her fitness, her soundtrack of choice is anything with "a good beat and a little funk to it" but she admits she has a soft spot for Prince. "Oh, most people don't know, but I'm a huge Prince fan," she says. "I grew up in the '80s, in the late '80s, so I'm all about Prince."

Yet, she confesses, she still has online guilty pleasures like the rest of us. Her hands-down favorite is online shopping — particularly via Ebay — where she'll score clothes that would cost thousands of dollars on the rack for a fraction of the price. In fact, that's how she got the suit she was wearing that day.

For all her thrifty finds, the weirdest things in her closet are all the clothes she refuses to throw away (even if they don't fit) because maybe one day they will. But she's probably at her most relatable and truest form when asked about what she really thinks about POTUS and what goes through her head when she looks upon him. For that, she responds: "Aye aye aye aye aye aye aye. Literally!"

I take a deep breath and I think: What crazy thing is going to come out of the White House?

"I just think, every Monday since i've been in this job, I take a deep breath and I think: What crazy thing is going to come out of the White House? And, something crazy always comes out and it's always worst than I thought it was going to be," she said. "And I just think, what are you doing to our country?"

As it turns out, senators have political dread just like you — but Sen. Duckworth has taught us that an unstoppable sense of humor can cure anything.