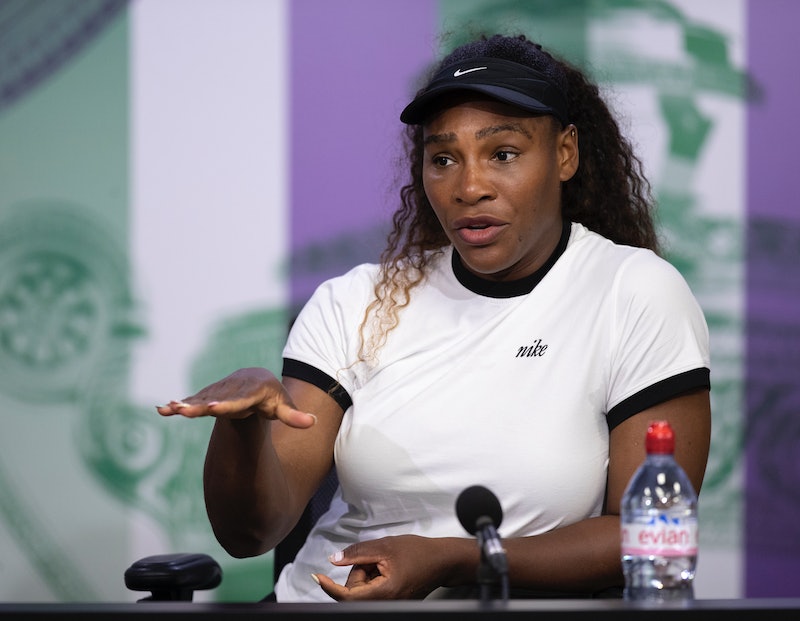 As Wimbledon picks up speed, a majorly high-profile tennis star has been confronted with a startling discovery: that she may have been targeted for excessive drug testing relative to other athletes. Speaking at a press conference on Sunday, Serena Williams said that drug testing should apply to athletes equally. Williams also said she didn't know that she had been disproportionately tested compared to her peers until she read a Deadspin investigation that came out last week.

"Tennis has given me so much. It’s such an amazing sport. I feel like equality, that’s all I’ve been preaching, it’s all about equality," Williams said. "If that’s testing everyone five times, let’s do it. Let’s be a part of it. It’s just about being equal and not centering one person out. Just due to the numbers, it looks like I’m being pushed out. Just test everyone equally."

The Deadspin report in question revealed that Williams has been drug tested five times in 2018 alone. That's more than twice as many times as other leading women tennis players in America, according to the report. When approached with the data, Williams' camp called out what appeared to be a bias. A spokeswoman praised Williams's compliance in a statement to Deadspin that described the testing as "invasive":

Over her 23-year career in tennis, Serena Williams has never tested positive for any illegal substance despite being tested significantly more than other professional tennis players, both male and female – in fact, four times more frequently than her peers. She has vocally supported, respected and complied with USADA testing throughout her entire career. While she willingly continues to submit to testing, there is absolutely no reason for this kind of invasive and targeted treatment.

During the press conference, Williams described the Deadspin investigation as "interesting."

"It would be impossible for me to not feel some kind of way about that," she said of the report. "I just found it quite interesting."

The U.S. Anti-Doping Agency (USADA) told Deadspin in a statement that the organization "retains the right to test any athlete at any time and may target test athletes as USADA deems appropriate."

During the press conference, Williams recalled a drug-testing anecdote that was central to the report. According to Williams, an official recently arrived at her home to conduct a drug test about 12 hours earlier than had been planned. Because the official was so early, Williams was unable to participate in the test, and she says she was then marked as a "missed test."

Per ESPN, athletes must provide a one hour period that they are available for testing, every single day, even when they are not actively competing. Drug test administrators may arrive unannounced, outside of the agreed upon time, but it doesn't guarantee that the athlete in question will be available.

According to the USADA website, if an athlete accrues three "whereabouts" failures, they are slapped with a "whereabouts related – anti-doping rule violation."

"I do know I'm always tested. I'm always getting tested, all the time," Williams said at Sunday's press conference. "No matter where I'm ranked. Until I read that article, I didn't realize it was such a discrepancy with me, as well as against the other players that they listed, at least with the American players, both male and female. It will be impossible for me not to feel some kind of way about that."

How Williams and the USADA will proceed from these revelations isn't immediately clear. Neither is it clear whether the report will have any impact on the frequency with which the organization submits Williams to testing. One thing that's certain is that Williams appears to have been an exceptionally good sport about the entire debacle.

More like this
At 28, Melanie C Was Falling In Love & Reclaiming Her Confidence
By Olivia-Anne Cleary
Isa Guha Is Taking The Lead
By Charlie Mock
Self Esteem's “F*cking Wizardry” Is An Anthem About Knowing Your Worth
By El Hunt
Gisele Bündchen Appears To Address Those Tom Brady Divorce Rumors
By Radhika Menon
Get Even More From Bustle — Sign Up For The Newsletter