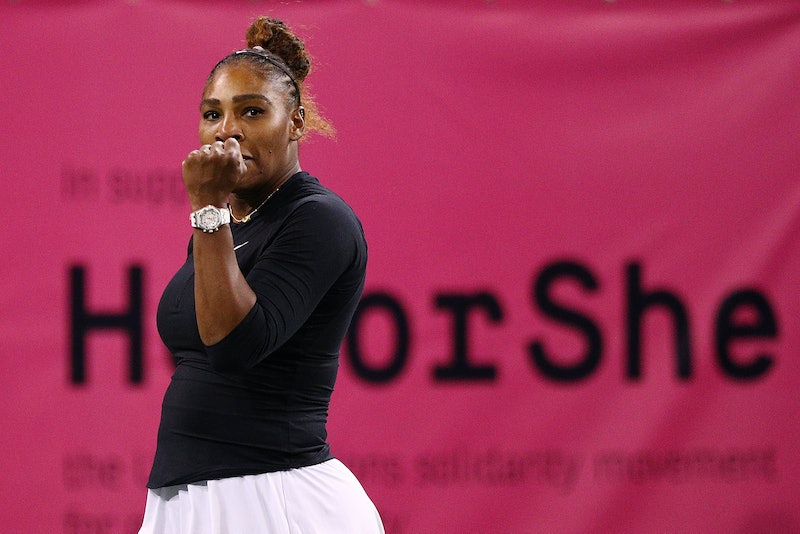 Friday marked International Women's Day, and for tennis star Serena Williams, the day constituted "a reinvigorated call to action." In an essay for Fortune, Williams explained that she is a board member for SurveyMonkey, and that she had commissioned some data about women at work in that capacity. Serena Williams' International Women's Day message indicates that women still face numerous double standards — both at work and as parents.

According to the survey, 93 percent of women polled described work-life balance as "extremely" or "very important." However, nearly 50 percent of women polled — and an even higher percentage of working mothers specifically, including Williams — indicated that they have sacrificed career goals for family. In partnership with Williams, SurveyMonkey learned that working mothers often face the most difficult choices, with women being four times more likely than men to be primary caregivers.

"More than half of moms feel guilty leaving their children to go to work and a third say their job makes it challenging to do the things they want and need to do for their family," Williams explained in her essay. "Forget the cliché of ‘having it all,’ the reality is, women are trying to do it all."

As a result, women were less likely to report being comfortable with taking career risks than men. In fact, only 47 percent of women polled said they would be "extremely" or "very" comfortable taking risks to advance their careers, compared to 57 percent of men.

But balancing work with personal life is not the only systemic obstacle that working women face. According to the survey, nearly a third of women reported feeling as though they had to hide their emotions at work in order to be taken seriously. This problem was particularly prominent among millennial women, who also reported finding it difficult to be working parents at higher rates.

As women work to advance their careers, another hurdle they face is the sense of competition they often feel with other women in the workplace. According to Forbes' Bonnie Marcus, male-dominated workplaces often foster an increased sense of competition among women due to the scarcity of women in leadership and the greater scrutiny that women consequently face.

SurveyMonkey found that 84 percent of women surveyed felt that having the support of other women helped them achieve their career advancement goals, but only 55 percent reported actually receiving this support, citing competition as a primary culprit. More than a quarter of women also said that they don't ask for the support they need. According to the survey, 43 percent of women said that mentorship was the best way for women to support one another in the workplace, with 20 percent calling for emotional support and 18 percent citing career guidance.

"I want to remind all women reading this about the importance of supporting one another through the highs, lows, laughs, and tears, and always asking for help when it’s needed," Williams wrote in her essay. "Trust me when I say: we’ve all been there before.

Williams added that she wanted to be "honest about my struggles as a working mom because I want other women out there to know they are not alone.” She pointed out that she missed her daughter Olympia's first steps because she was training, and faced a long road to recovery following an injury that was both emotionally and physically taxing. As a result, she wants women to not only support one another but also to be realistic in their expectations for themselves both at home and in the workplace, and to "band together and fight for what’s fair."

More like this
Serena Williams Is Retiring From Tennis: “I'm Ready For What's Next”
By Marina Watts and Grace Wehniainen
Gemma Collins' Net Worth Is Only Going Up
By Catharina Cheung
What Is Brad Pitt’s Net Worth? The Bullet Train Star Now Makes 8 Figures Per Film
By Hugh McIntyre
What Is Beyoncé's Net Worth? The 'Renaissance' Hitmaker Makes 9 Figures On Tours
By Radhika Menon
Get Even More From Bustle — Sign Up For The Newsletter