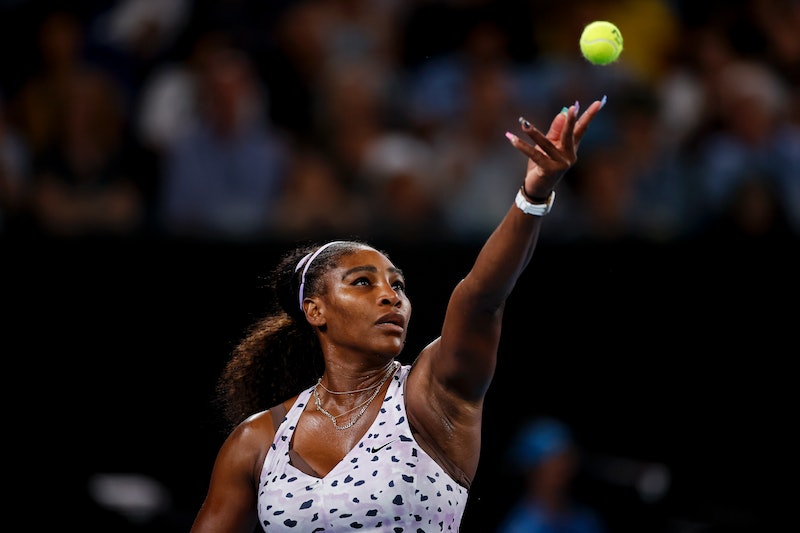 By now, everyone has heard about the devastating wildfires in Australia, and everyone is reaching out to show their support, celebrities included. One wildlife supporter and major celebrity who is doing just that is Serena Williams, who paid tribute to the country's koalas in an unexpected way.

The tennis star is currently competing at the Australian Open in Melbourne and during a match against Slovenia tennis player Tamara Zidanšek on Jan. 22, spectators took notice of Williams' adorable, but thoughtful nail designs. In true Williams fashion, she rocked lengthy acrylic tips for her two sets against Zidanšek, and on those pastel French tips was a design of a koala on her ring finger's nail.

Williams has publicly shared her concern for the Australia wildfires as she's been visiting the country for over 20 years. The tennis icon made a post on Jan. 9 that featured images of koalas being rescued along with ways her followers could help the cause.

"I am heartbroken over the devastation of the wildfires in Australia," Williams wrote. "With the loss of over 500 million animals and many people left without their homes, we need to act now to help in whatever way we can. I have been going to Australia for over 20 years so this devastation is hitting me particularly hard. Here’s how we all can help: donate what you can and support organizations like @world_wildlife @wireswildliferescue @nswrfs @cfavic who are doing everything they can to provide resources to rehabilitate Australia’s wildlife."

Serena is among a multitude of celebrities doing their part to help Australia, including Selena Gomez, Leonardo DiCaprio, and Elton John. If you are looking for ways to offer your support to Australia, click here.