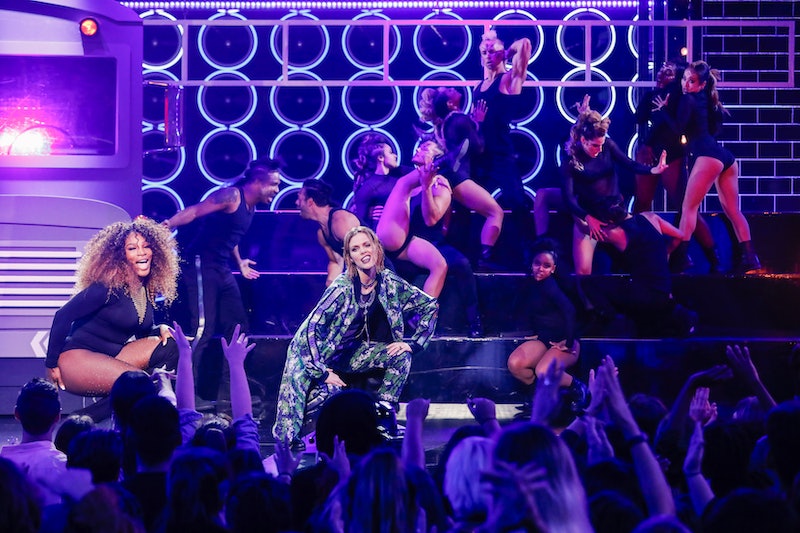 Karaoke is one thing, but trying to lip sync to popular songs in front of an audience is a whole other challenge. So seeing some of the biggest celebrities trying to perfect these iconic performances or numbers is of course, very entertaining. And Serena Williams' Lip Sync Battle appearance is going to be one to remember. As with anything Williams does, this performance, recreate her legendary appearance in Beyoncé's Lemonade visual album, is most likely going to be super impressive and might just win the entire competition.

The episode of Lip Sync Battle featuring Serena Williams comes out Jan. 31 on the Paramount Network, and has Brooklyn Decker facing off her tennis player husband, Andy Roddick. In a short preview of the upcoming performance, Decker, a model and actress, takes the stage in a flashy camo tracksuit (a callback to the original video) while Beyoncé's "Sorry" plays in the background. Roddick already looks very impressed, but then a wall in the back is moved and out comes Williams. That's when everyone in the room seems to lose it. Even Roddick can't contain himself and co-host Chrissy Teigen almost loses her hat, she's jumping up and down so hard.

You're going to have to wait until Thursday for the full episode to see the complete "Sorry" performance. However, the clip did include a bit where co-host LL Cool J asked Williams what it was like dancing to the song in front of a live audience instead of a camera. "Oh my God, it was so fun!" she said. "It was so fun, we're here to win this."

"Sorry," which was off of Queen Bey's sixth album Lemonade, is a pretty empowering anthem. Lemonade by itself is pretty much a work of art, visuals and all, and told Beyoncé's story in a way that celebrated herself and her craft. For the visual album part of it, she had different emotions for each song, and "Sorry" is the fourth one, Apathy.

Williams appears in this part of the 65-minute Lemonade film, dressed in a black bodysuit, like the one she wears in the upcoming Lip Sync Battle episode.

Back in 2016, after Lemonade premiered, Williams told the Associated Press that her connections with the director of the segment, Kahlil Joseph, are what sparked the appearance in the "Sorry" video. "I have known the director since I was like nine years old." Williams said. "I know Beyonce pretty well, so they were like, 'We would love for you to be in this particular song. It's about strength and it's about courage and that's what we see you as.'"

And, while it's hard to picture Williams being out of her element while doing, well, anything, the tennis player also revealed she felt a little out of sorts on set. "She told me that she just wants me to dance, like just be really free and just dance like nobody's looking and go all out," she said. "So that wasn't easy in the beginning, but then it got easier." The end product was of course good and memorable, and by the looks of this Lip Sync Battle sneak peek, Williams has only gotten more confident in her dance movies.