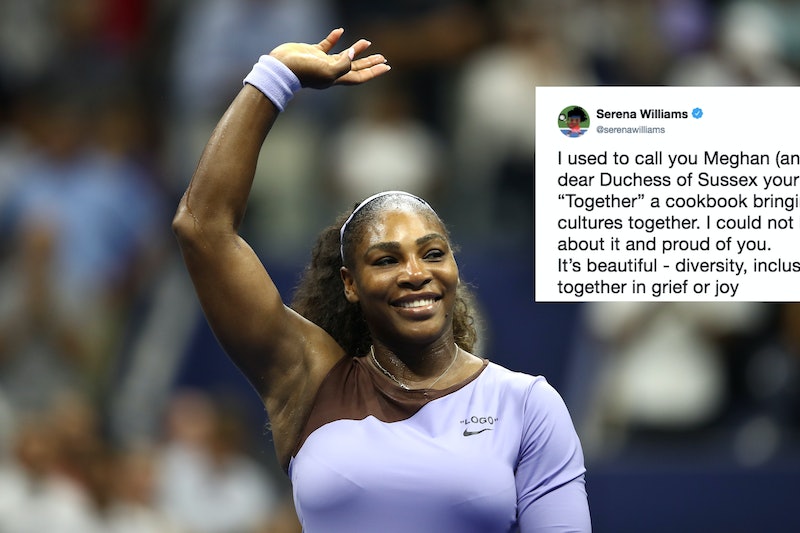 On Monday, Kensington Palace announced that the Duchess of Sussex would write the foreword to a special cookbook, and the project already has received lots of love online. Serena Williams supported Meghan Markle's cookbook with a heartfelt tweet, and the message shows just how powerful the project will be. The book is titled Together: Our Community Cookbook, and intends to show how communities come together through food. The book will be published by the Royal Foundation and will showcase 50 recipes by women whose community was impacted by the Grenfell Tower Fire, according to Kensington Palace.

The meaningful cookbook caught the attention of Williams, who has also worked closely with charitable organizations in the past. The tennis star praised the project's mission on social media, as well as her good friend's involvement. On Twitter, Williams wrote:

"I used to call you Meghan (and I still do) but dear Duchess of Sussex your first project 'Together' a cookbook bringing women of all cultures together. I could not be more excited about it and proud of you. It’s beautiful - diversity, inclusivity, coming together in grief or joy."

The tweet also featured a picture of the book's cover, which shows Markle cooking with some of the women whose recipes will be featured in the project.

Williams and Markle have a well-documented friendship, and the two stars first met at the 2010 Super Bowl, according to People. Years later, they still find time to spend together, even amid major life changes and career milestones. The tennis legend was in attendance at the royal wedding in May with her husband Alexis Ohanian, according to Marie Claire. In July, these old friends made time to catch up with each other once again. Williams and Ohanian joined the Duchess of Sussex to watch Prince Harry compete in a polo match in Ascot. The fact that the royal newlyweds made time to spend with Williams, who is a new mother and was training for Wimbledon, shows just how special this friendship is.

The two stars also share a commitment to charity work and promoting social change. In January, Williams joined Colin Kaepernick in an effort to raise $1 million for charities across the U.S. The tennis player matched Kaepernick's donation to a Los Angeles-based organization called Imagine LA, which helps homeless families, according to Sports Illustrated.

According to People, Williams also teamed up with the Allstate Foundation's Purple Purse initiative to speak out against domestic violence. Markle is known for her work for gender equality through the U.N., and has made empowering women a key issue to address in her new duties as the Duchess of Sussex.

Markle's cookbook is her first official effort focused on elevating women as the Duchess of Sussex. The idea for the book came when Markle visited the Hubb Community Kitchen, which was started by a group of women who gathered at the Al-Manaar Muslim Cultural Heritage Centre in West London to prepare fresh food for friends, neighbors, and family, according to the Royal Foundation. Through cooking, the women were able to help the people in their life connect and heal, establishing the space as an official community center. Markle first visited the kitchen in January 2018, and was inspired by how the kitchen empowered women, according to the Royal Foundation website.

The proceeds from the book's sales will go toward keeping the community space open. In the official statement from the Royal Foundation, Markle wrote:

"I immediately felt connected to this community kitchen; it is a place for women to laugh, grieve, cry and cook together. Melding cultural identities under a shared roof, it creates a space to feel a sense of normalcy – in its simplest form, the universal need to connect, nurture, and commune through food, through crisis or joy – something we can all relate to. Through this charitable endeavour, the proceeds will allow the kitchen to thrive and keep the global spirit of community alive."

It's clear the work the Duchess of Sussex is doing can inspire women all over the world, including some of her closest friends. William's message for Markle shows just how impactful this project will be. While they both are game-changers in their own right, it could even be possible that these two women will team up for a cause they care about in the future.

More like this
The WAGatha Christie Verdict Is In – & The Court Has Ruled In Rooney's Favour
By Bustle UK
13 Photos Of Princess Charlotte Loving The Commonwealth Games
By Sam Rogers
Meghan Markle Gave An Adorable Lilibet Update
By Alice Broster and Sam Ramsden
Serena Williams Is Retiring From Tennis: “I'm Ready For What's Next”
By Marina Watts and Grace Wehniainen
Get Even More From Bustle — Sign Up For The Newsletter