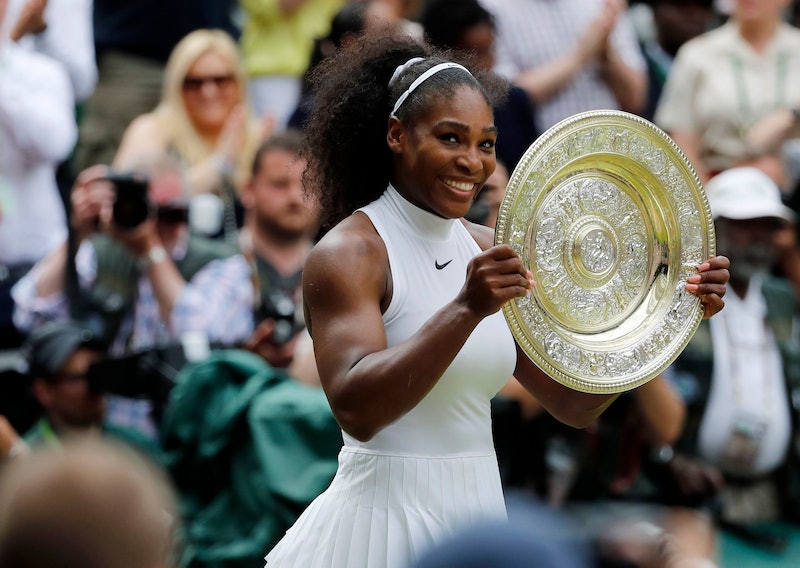 The greatest to ever do it could soon secure yet another Grand Slam, so it's only fitting that Serena Williams' Wimbledon 2019 outfit, designed by Nike with a Swarovski detail, will pay tribute to her excellence. This year, she'll wear a knitted white dress by Nike, featuring a sewn-on gold and Swarovski crystal brooch in the shape of the famous Nike "swoosh".

The brooch — or "Broosh," as Nike calls it — features a total of 34 Swarovski crystals, which happens to be the age Williams was when she secured her last Wimbledon title in 2016. Abby Swancutt, NikeCourt's global design director, said in a press release, "I also wanted her to feel like it was something her grandmother could have worn, but of course give it a modern spin and make it just right for Serena." It's the first time Nike and Swarovski have collaborated on a "Broosh" — and who better to premiere it than Williams?

The tennis icon has repeatedly been subject to undue criticism, laced with racism and misogyny, concerning her on-court appearance — remember the (incredible) Nike bodysuit she wore to the 2018 French Open? Bernard Giudicelli, president of the French Tennis Federation, commented, "You have to respect the game and the place," and the outfit was subsequently banned.

(Williams, you might recall, wore the catsuit to tackle her post-childbirth blood clots. She said the catsuit made her feel "like a warrior princess" and a "queen from Wakanda.")

As Nadra Nittle wrote for Vox, "One of the rare black women to dominate tennis, Williams has faced criticism throughout her career for not looking like the women who’ve traditionally played the sport. Her hair, body, and fashion choices have routinely been scrutinized, often with an undercurrent of race, sex, and class bias."

At this year's French Open, as Vogue reported, Williams wore a custom Virgil Abloh-designed ensemble, emblazoned with the French for, "Mother, Champion, Queen, Goddess." She told Vogue, "It talks about me being a mom and me being a queen, as all women are. A champion. It's positive reinforcement for me, and I kind of love that."