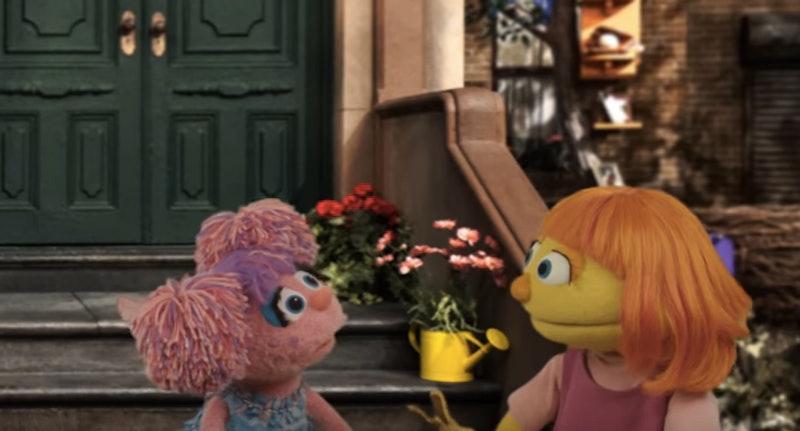 I don't know about you, but I definitely watched Sesame Street as a little kid. So did my sister, my friends, and all of my cousins. If it seems like everyone and their mother grew up watching Sesame Street, there's a reason for that. The classic show has been on the air since 1969, meaning multiple generations were raised watching Elmo, Oscar the Grouch, Big Bird, and Cookie Monster every week. These characters are the show's most familiar faces, and while these classic muppets will never leave the series, every once in a while the creators introduce someone new. In April, Sesame Street will introduce Julia, a new muppet who has autism. The character will definitely resonate with many kids and their families, making this a huge moment for representation.

Sesame Street is a show all about teaching kids about the world. Big Bird leads the cast, who teach numbers, colors, and the alphabet to viewers through songs and games. Like many PBS shows, it's a crucial way to bridge learning gaps for children. However, the friendships between the muppets also teach children how to treat each other. As a result, young viewers pick up everything from new knowledge to social behaviors and attitudes from the show, and introducing a character like Julia has the potential to create a significant social impact.

The creators of Sesame Street revealed the new character in an interview with 60 minutes, noting that Julia will appear alongside Elmo and Abby. Julia has already been featured online in a Digital Storybook clip. The show runners noted that Julia will meet Big Bird and be hesitant to shake the character's hand. The show will explain why Julia behaves this way, helping children to understand each other better. The other characters will accept Julia, even when she does things differently, and this could directly impact the way children with autism are treated in their own lives.

Julia's puppeteer, Stacey Gordon, is the mother to an autistic son and has high hopes for the character. "Had my son's friends been exposed to his behaviors through something that they had seen on TV before they experienced them in the classroom, they might not have been frightened," Gordon told 60 Minutes during the segment. "They might not have been worried when he cried. They would have known that he plays in a different way, and that that's OK."

The Sesame Street team wanted to make sure that the character was portrayed well, and they worked closely with autism organizations when creating Julia. About 1 in every 68 children in the U.S. has "been identified with autism spectrum disorder," according to the CDC. It's more important than ever to educate young audiences about autism, and to cultivate a society where individuals diagnosed with autism are understood and can thrive.

Sesame Street writer Christine Ferraro stressed to 60 minutes that much love and care went into portraying Julia well. "It’s tricky, because autism is not one thing, because it is different for every single person who has autism," Ferraro told the show. "I would love her to be not Julia, the kid on Sesame Street who has autism. I would like her to be just Julia."

There's no news yet on how often Julia will appear on the show, but even if she is only on Sesame Street for a short time, her presence is sure to make a difference. Julia is definitely going to be a major star on the show, and as children fall in love with her, they will start to care for each other better. Way to go, Sesame Street!