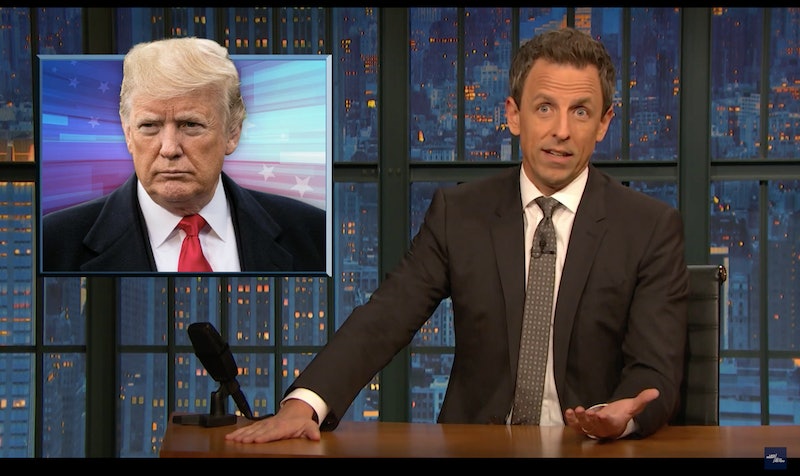 On his show on Monday night, Seth Meyers argued that Trump's wildfire claims further contribute to the host's conclusion that the president is "deeply weird." The comedian cited Trump's wildfire-related comments about Finland — and his confounding comments about several other countries — to illustrate his point.

Meyers opened his segment by pointedly asserting his opinion on Trump. "One thing I think everyone could agree on is that he [Trump] is weird," Meyers emphasized. "He is a weird man. Just a flag hugging, umbrella ditching, can't do a normal handshake kind of weirdo."

The late night host then went on to indicate that one of the "weird" things that Trump does is to seemingly "concoct a bizarre lie about another country every few months." Meyers also added, "Then, everyone in that country has to figure out what he's talking about."

The comedian pointed to the president's recent comments about Finland's forests as an example of this behavior. As Meyers described, Trump recently claimed that people in Finland rake the ground in forested areas, seemingly as a way of preventing wildfires. President Trump made these comments while speaking alongside state officials in California as he surveyed damage from the state's multiple deadly wildfires.

In a clip that Meyers played on his show, Trump asserted:

Gotta take care of the floors. You know, the floors of the forest, very important. You look at other countries where they do it differently and it's a whole different story. I was with the President of Finland ... and they spend a lot of time raking and cleaning and doing things and they don't have any problem ... So I know everybody's looking at that ...

Meyers ruthlessly mocked Trump after playing the clip. "If you didn't know Trump was president, you'd think he was a weirdo who just walked up to them [the state officials] from his trailer in the woods," Meyers exclaimed. "You gotta rake the floors! You gotta rake the floors of the forest! That's what my friend Nutty the squirrel told me."

The comedian also pointed out that Finland's president, Sauli Niinistö, indicated that, while he did discuss California's wildfires with Trump, he never mentioned raking the country's forests. Meyers noted that these differing accounts of conversations among Trump and other leaders seems to be a common trend. "It keeps happening," the comedian said. "Trump makes up something insane about another country and then the president of that country has to come out and say it's not true."

Throughout his segment, Meyers cited examples from other countries to bolster his point. Indeed, the host pointed to Trump's Feb. 19, 2017 claim that a terrorist attack had occurred in Sweden the night prior — despite the fact that no such attack ever took place.

The comedian also listed Trump's comments about Germany at the UN as another example of what he perceives as the president's weirdness. In a Sept. 2018 speech, Trump claimed Germany would become "totally dependent on Russian energy if it doesn't immediately change course." The president also added, "Here in the Western hemisphere we are committed to maintaining our independence from the encroachment of expansionist foreign powers." As Trump spoke, the German delegation appeared to be laughing at his remarks.

Meyers wrapped up his segment with some pretty cutting concluding remarks about Trump's bizarre behavior toward other countries. "We have a president who concocts outlandish lies and spreads baseless conspiracy theories and attacks anyone who calls him out," Meyers asserted. "And all the while the rest of the world laughs at us, from Finland to Germany to [Sweden]."