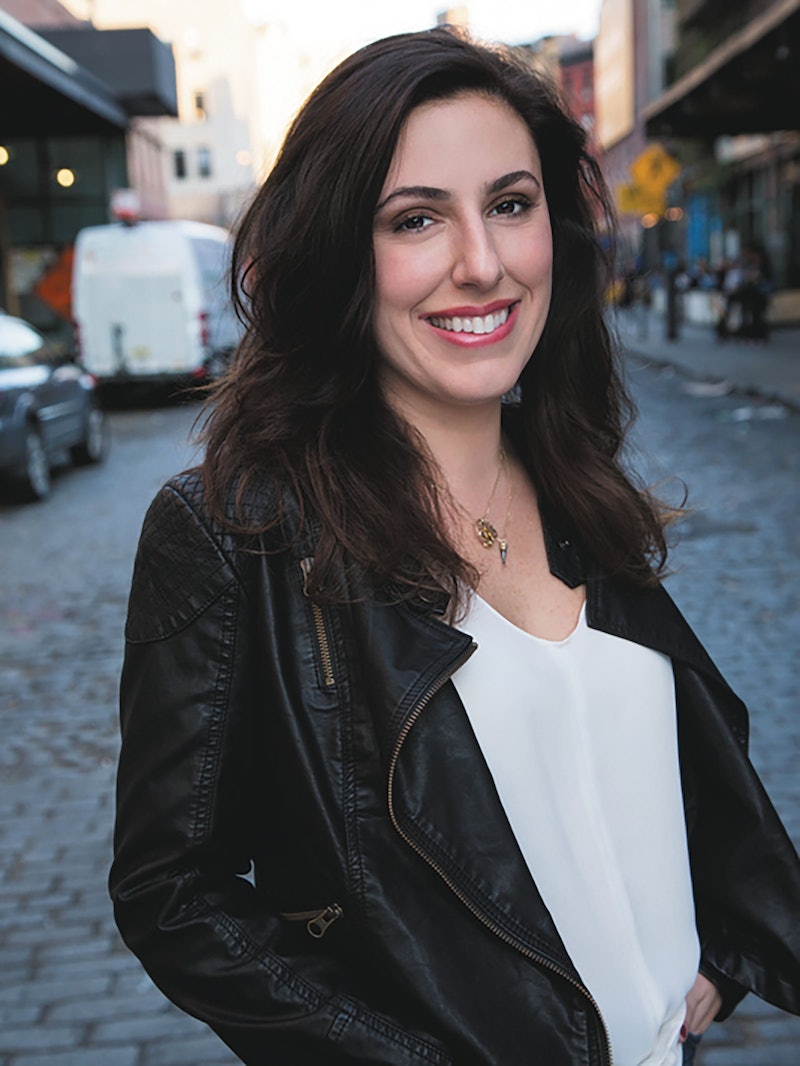 “It was strange to have just written a book about sexual objectification and the impact of sexism on women’s lives, and then have a Donald Trump presidency happen. It was surreal, almost,” writer Jessica Valenti tells Bustle in a recent interview. “But it made me glad, at least, that right now there is this space for women to talk about their experiences in a way that, say, 10 years ago, there just wasn’t. There just wasn’t the cultural space.”

For those who might not know, Jessica Valenti is a feminist author and a columnist and staff writer for Guardian US, whose memoir Sex Object was published last summer by Dey Street Books, and just released in paperback on February 28. She also founded the feminist blog, Feministing, in 2004 — a site that is still going strong over a decade later. Her other books include Full Frontal Feminism, The Purity Myth: How America's Obsession with Virginity is Hurting Young Women, and others, all of which deal with feminism, womanhood, politics, and culture.

Sex Object is Valenti’s most personal book to-date, a claim the feminist writer agrees with. The book takes readers through Valenti’s late teens and twenties spent in New York City, looking at the toll that sexism takes on young women in America. The book is as relatable as it is uncomfortable, both inviting and challenging readers to think about the ways sexism informs their own lives — and not just through significant moments of trauma, like assault. At its core, Sex Object is exploring the cumulative effects of everyday sexism, a sexism that is so normalized in American culture we might not even recognize all the subtle ways it has shaped our identity. Until we do.

“I’ve always incorporated personal stories into things that I’ve written, but like a lot of writers, there are things you hold back. This book is really personal and broadens out to the political,” says Valenti. “That was nerve-wracking, of course. But in a way, I think because I’d been writing about these issues for so long and because I already get such a tremendous amount of harassment, I felt like: ‘Let’s just put it all out on the table and get this over with. If I’m getting harassed anyway, if I’m getting threats anyway, then I might as well be completely honest and say everything that I want to say.’”

"Let’s just put it all out on the table and get this over with."

The writer has definitely received the kind of harassment that most of us women writing online fear — enough that after Sex Object was first published, Valenti took a brief break from social media. And she’s concerned about the ways online harassment might be influencing the writing community as a whole. “I talk to young people all the time who say they want to be writers but don’t think they can deal with the hatred, so I think we really need to worry that we’re losing a whole generation of writers from marginalized communities — women, queer people, people of color — who have so much to offer but quite understandably aren’t interested in putting themselves out there to be harassed and threatened. That means the culture that we’re getting — in journalism and in media in particular — is coming from a very narrow viewpoint of people who don’t get harassed quite as much. I think that’s a real problem.”

“When we think about the ways that sexism impacts women, we talk about worst-case-scenarios and the worst moments of our lives, and we don’t necessarily think about the cumulative effect of all the smaller moments. But that’s just as important, just as impactful," she adds.

But despite the haters, Valenti is quick to admit that writing online and having access to social media is also a great thing for women — and women writers. “I think the internet has been a complete paradigm shift for feminism, in a way that has been wonderful and democratizing and incredible,” says Valenti. “Almost all of the writing I’ve done has been online, and after I started Feministing in 2004, that was when I really began to write in earnest. While I love writing books and having work that exists and doesn’t move, one of the cool things about being a writer online is that you can track your progress and the way your writing has changed throughout the years. Or, when I was blogging, I’d write something and someone in the comments section would say: ‘Well have you thought about this?’ And you can add on to your thoughts. It’s a constantly-moving discourse in a way that writing wasn’t before, and I think that is really exciting and useful.”

“Most of my feminist reading is reading folks online," she says. "It’s the most wonderful thing about internet — even though we have all these great feminist books and the feminist cannon and writers who everyone knows, when you’re online, you’re finding a new, young, feminist writer every day and reading their work. You have this ability to be constantly inspired in a new way.”

It’s the kind of inspiration that is greatly needed right now. When asked if Trump’s presidency is actually a step backwards in history for women, or if he just made what was already the status quo impossible to ignore — a subject that Valenti has tackled frequently in her recent columns for The Guardian — she says this: “I don’t think that what Trump is saying is new. I don’t think that racism, misogyny, and xenophobia are new. But I think that he is making those things more explicit. He’s saying all the things that a lot of Republican policy has long enshrined, really. A lot of conservative policy is extraordinarily racist, is extraordinarily sexist — but it’s often framed using the language of feminism. For example, an anti-choice bill will be called something like the ‘Woman’s Right To Know Act,’ — framed with this softer language. What Trump is doing is saying it explicitly.”

"...when you’re online, you’re finding a new, young, feminist writer every day and reading their work. You have this ability to be constantly inspired in a new way."

This appropriation of feminism — as Valenti says — is something that concerns her. And as a writer who doesn’t waver when calling herself a feminist, or when referring to her work as feminist writing, the language of feminism is something she’s acutely aware of. “I think in the past I very deliberately defined and talked about feminism in pretty broad terms — really just using the dictionary definition: social, economic, political equality between sexes — and that was a strategic decision because I did want as many people as possible to ask themselves: Am I a feminist? What does feminism mean to me?” Valenti says.

“That said, I think right now we’re in a moment that is both very powerful for feminism, but also very dangerous. Because of how popular feminism has become, we’re seeing people co-opt it and appropriate it, right-wing conservatives or anti-choice organizations making this shift from calling women 'baby killers' to saying 'women deserve better than abortion.' There’s a misappropriation of feminist language because they recognize how powerful feminism is, and that is really dangerous. I don’t think we can allow people who would roll back women’s rights to do so in the name of empowerment,” says Valenti.

"I think right now we’re in a moment that is both very powerful for feminism, but also very dangerous."

“I think we’re at this moment when we do have to be a little bit clearer about what the boundaries of feminism are," she says. "I mean, no one wants to be the feminist police, no one wants to say 'this is a feminist' and 'this isn’t a feminist.' But I think we’re at the point where we do have to be clear that feminism is just not anything a woman does. It is a movement for social justice. It is a movement for systemic change. And if you’re fighting for policies that actively hurt other women, that’s not feminist.”

Throughout Sex Object, Valenti writes about the idea of women living in a culture that hates them, asking herself (and readers) who she would be if she didn't live in a world that hates women. It’s a question that’s difficult to answer — and one that Valenti still hasn’t answered herself. “That’s part of why I wanted to write the book and part of why I wanted to ask that question, because it’s so sad to think that we don’t know,” Valenti says. “Misogyny and sexism are such huge parts of our lives that we absolutely can’t answer that question, because sexism does shape so much of who we are.”

“What’s hard for me in particular is that I have a six-year-old daughter — she’s still young enough that it hasn’t impacted her much yet, and she’s so wonderful — it just makes me sad to wonder how her personality, her psyche, the way she thinks of herself going to shift and change based on the world that we live in," Valenti says. "But I’m trying to be optimistic and hopeful. I think if we’re at least asking the question, if we’re at least raising it as something to have in the back of our minds as we go through our lives, we’ll be a little bit more aware.”

Writing against that hatred was one of Valenti’s goals when writing Sex Object; and it’s something she sees online media playing a major role in, moving forward. “I think like a lot of hatred, misogyny comes from fear and the desire for power and control — and in terms of what we can do about it, that’s like the million-dollar question, right? That’s part of the reason I wanted to write this book, and that’s part of the reason why I’m so heartened to see all of the feminist activism that’s happening right now — particularly online, with women sharing their stories, using hashtags like #YesAllWomen. I think the way that you battle against is to humanize yourself. Part of misogyny is dehumanizing women, that we are seen as objects and we’re not seen as people. The more we tell our stories, the more we share the nuances and the intricacies of our lives, the harder it is for people to not see us as fully human.”

She adds: “I’m hopeful in that way, that we’re at a turning point. And I do think that Trump’s election, as horrible as it is and as much as it shows that misogyny is alive and well, I also sort of see it as the ultimate act of backlash against all the feminist progress that’s been happening. I think it’s the last dying gasp of patriarchy — fingers crossed.”

Valenti says she also wrote Sex Object in hopes of establishing more transparency between her and her readers — to present herself as the fully-human, flawed and growing, feminist woman that she is. “Part of the reason Sex Object was so personal was because I would hear from a lot of young women who would say: 'Well you do all this feminist writing and you deal with the hatred so well, and how do you do it?' as if I was handling it all perfectly. And I wasn’t. I’m a mess, right? It’s hard and it's difficult and I’ve made a lot of mistakes. I’ll say the same thing I wish I’d known as a young person, which is: you can fuck up, you can make big mistakes, you can feel terrible, and still fix it, and still be fine, and still get on with your day and get on with your life.”

“Just because things can be terrible doesn’t mean that they’re immutable or that you can’t change them, and I think we’re seeing that more and more everyday with online activism and writing and everything else," she says. "So just keep at it.”