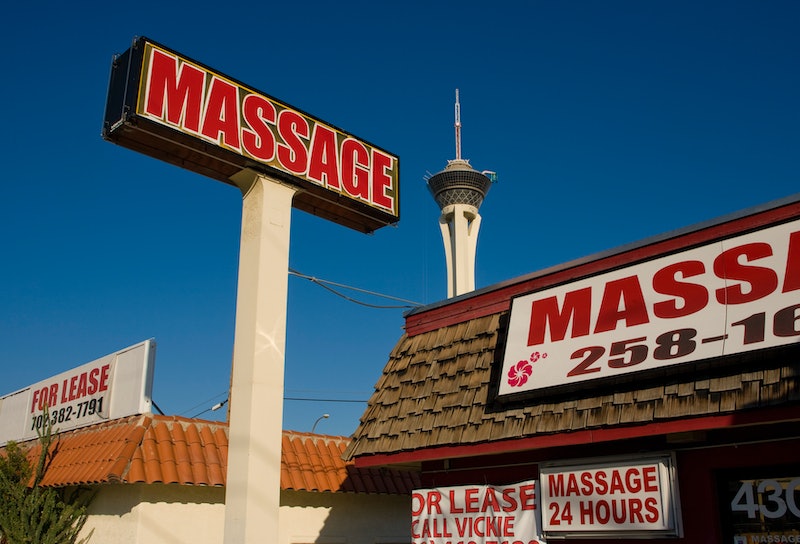 While some women choose to go into prostitution, the Polaris report suggests many of the thousands of women who work in the illegal massage business are victims of human trafficking. Most of the unlicensed masseuses are immigrants from China or South Korea in their mid-30s to 50s who speak little or no English. The majority of them have at least one child overseas, according to Restore NYC, a nonprofit that provides recovery services to survivors of sex trafficking.

Polaris spoke with more than 1,300 victims of sex trafficking. The organization found that traffickers prey on vulnerable women through a word-of-mouth network, advertisements in the women's native language, and chat apps that are popular in China and Korea like WeChat and KaKaoTalk. The promise of steady wages, visa support, and housing is alluring, even if the women don't know what kind of work they'll be doing when they arrive.

Polaris also found that former workers who moved up the ranks to become managers of massage parlors or open their own establishments were exploiting women. "Women are trafficking women, which is a distinct aspect of this sex-trafficking industry," Rochelle Keyhan, the report’s lead author, told BuzzFeed News. "They share the same language and background and so there's this natural trust there and then they exploit them."

The effort to eradicate human trafficking in the massage parlor business is complicated. First off, not all prostitutes are victims of sex trafficking. For some, it's a choice, and the topic of legalizing sex work has both supporters and critics. But the line between abuse and choice can blur when it comes to immigrants; as the Polaris report found, cultural shame combined with elements of force, fraud, and coercion often lead trafficked women who are arrested to tell police that they're performing commercial sex acts of their own free will.

Prostitution is illegal in the majority of states, which means the law is not on the victim's side. Raids meant to bust human trafficking rings often result in the arrests of documented and undocumented immigrants, who may face language barriers and not know their rights in that situation. Sole income providers leave their families destitute, and arrested immigrants risk homelessness, deportation, and a cycle of exploitation.

"We should treat these immigrants with compassion and understanding — not punishment," wrote Mary Caparas, manager of the New York Anti-Trafficking Network, for The Hill. "We need a well thought-out strategy that is developed with their input and provides access to real services based on their needs so that they can move forward in their lives."