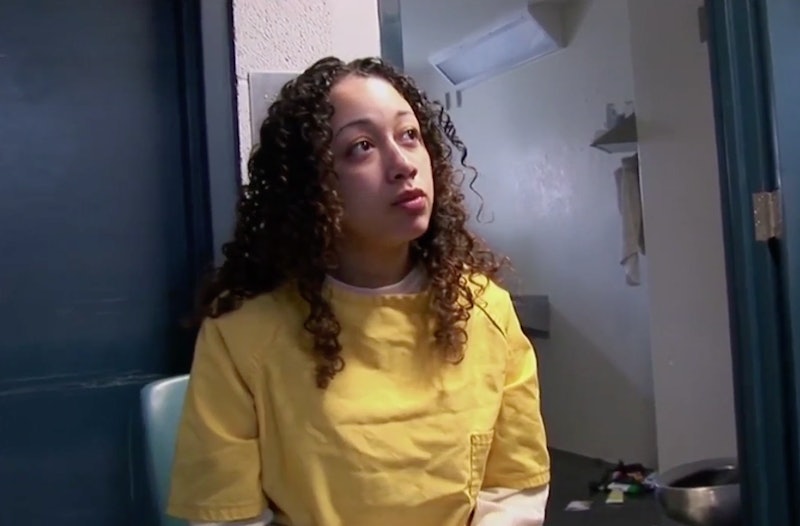 A Tennessee teen who helped rewrite the state's human trafficking laws is gaining national support now that the story of her own experience as a human trafficking survivor has gone viral. Cyntoia Brown, a former child sex slave, is currently serving a life sentence behind bars after she was convicted of killing one of her abusers when she was just 16 years old. Although Brown was convicted in 2006, her story has received renewed interest after celebrities like Rihanna started spreading the hashtag #FreeCyntoiaBrown earlier this week.

"Did we somehow change the definition of #JUSTICE along the way??" Rihanna wrote in an Instagram post on Tuesday next to a photo of Brown. "Something is horribly wrong when the system enables these rapists and the victim is thrown away for life!"

Rihanna's post has received over 950,000 likes, and in the hours since it was posted, other celebrities, like Kim Kardashian West and T.I., have also offered support and used their Twitter accounts, which have millions of followers, to share Brown's story.

Brown has been in prison for almost 10 years, and a documentary about her case, Me Facing Life: Cyntoia's Story, gained national attention when it first aired on PBS in 2011. It is unclear exactly why her case is back in the public eye now, but her story has alerted people across the country about the difficulty child sex slaves face in navigating the criminal justice system.

Brown was still in her early teens when she was trafficked by a pimp named "Cut-throat" in Nashville after running away from an unstable home. He allegedly abused her mentally, physically, and sexually, sometimes even pulling a gun on her, according to the Associated Press.

When Brown was 16, she was picked up from the side of the road by a 43-year-old realtor in a pick-up truck who took her to his home for sex. Later that evening, she shot him in the back of the head as he lay naked next to her in bed.

Although Brown claims that she grew paranoid when she saw a large stash of guns in the man's home, and believed that he might kill her, prosecutors in the murder trial argued that her intent was to rob the man. She was convicted of first-degree murder and sentenced to life in prison at the Tennessee Prison for Women. She is not eligible for parole until she is 67 years old.

The outrage that Brown's case inspired in people across the country actually helped change Tennessee law to ensure that no child victims of sexual abuse or manipulation have to face life behind bars for defending themselves against abusers. In 2011, the state changed its laws so that anyone under the age of 18 can't be charged for prostitution; rather, they are recognized as being too young to consent to sexual activity, as Brown was.

"[There's] no such thing as a child prostitute or a teen prostitute," Derri Smith, the founder of End Slavery Tennessee, told Nashville station WZTV. "I think we've had to have a cultural mind shift."

Additionally, activists in Tennessee are also trying to change state laws so that juveniles can no longer be charged to life in prison without the possibility of parole, according to The Tennessean.

Brown's case has been an impetus for policy change — however, Brown herself still remains behind bars, even though she has been described as a "model prisoner" and continues to pursue higher education while in prison. The renewed interest in her case has generated dialogue about the systemic barriers women face to standing up to their abusers, and about how women, particularly women of color, are so often victimized by the criminal justice system.

More like this
Why You're Seeing Green Bandanas At Abortion Rights Protests
By Lexi Inks
The Most Powerful Photos From The Weekend’s Abortion Rights Protests
By Melanie Mignucci
Yinka Bokinni Recalls Terrifying Truth At Heart Of 'How To Hire A Hitman'
By Frances Stewart
The Families Of Grenfell Tower Are Still Waiting For Justice, Five Years On
By Bustle UK
Get Even More From Bustle — Sign Up For The Newsletter