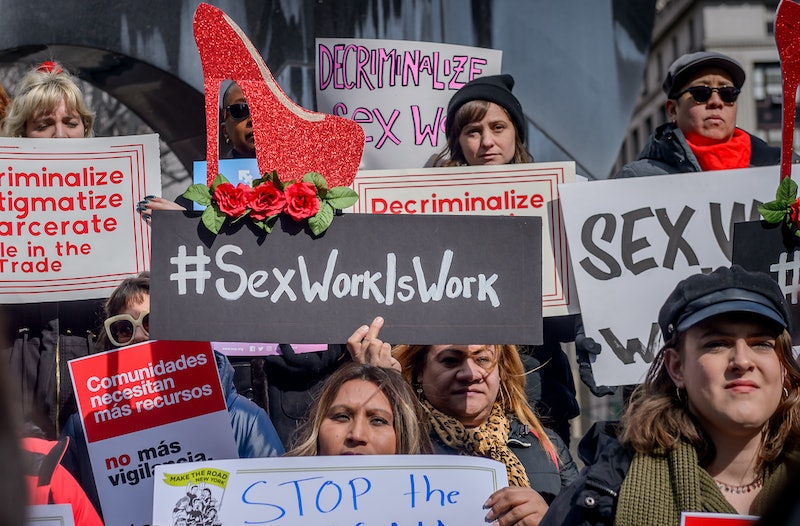 Tamika Spellman has been a sex worker since she was 15, after she had her first child. "You can't tell me that I cannot decide that I need to do certain things to make sure that my baby has formula and diapers," she tells Bustle. She's now been a sex worker for 37 years. Over that time, she's experienced the many dangerous effects of the ban on sex work.

In 1993, Spellman says she was shot on the street while doing sex work. Her injuries were minor, but she feels the police never really investigated. "I don't feel like I ever got justice for that," she says. Spellman also says she has been harassed and assaulted by the police themselves. "When criminal activities happen against us as sex workers, nine out of 10 times, nothing has been done."

Spellman is now a policy and advocacy associate at the Washington D.C.-based sex worker rights organization HIPS. She also conducts community outreach; some mornings, before 6 a.m., she'll go out to talk to sex workers to watch for any issues with trafficking or safety. "After being out here so long, I want to make sure that these girls are not going to have to deal with the same type of things that I've had to live with," she says.

Over the last few decades, sex workers like Spellman have fought for sex work to be decriminalized, or for criminal penalties for buying and selling sex to be removed, which studies have shown keeps sex workers safer and reduces trafficking. In the last few years, politicians have recognized their fight at the national level. Rep. Ayanna Pressley introduced a sweeping criminal justice reform bill on Nov. 14 that would decriminalize sex work across the country. States including New York, Massachusetts, and Maine are also considering decriminalization bills. A number of 2020 presidential candidates have also said they would support or consider decriminalizing sex work.

Spellman says "it's a step forward and it is still not enough." She and other sex workers and advocates tell Bustle they would like to see a comprehensive proposal for full decriminalization, and an overhaul of the public conversation about sex work and human trafficking. They'd also like to see officials stop passing purported anti-trafficking legislation, like Stop Enabling Sex Traffickers Act (SESTA) and Allow States and Victims to Fight Online Sex Trafficking Act (FOSTA), a package of bills passed in April 2018 that sex workers say doesn't help trafficking victims and has made their work even less safe.

Sex Workers Want Politicians And Advocates To Hear Them

The ideal political platform for sex workers is not one crafted by people who aim to "save" or "protect" them, but one that's created by sex workers themselves.

"Sex workers have to speak for ourselves whenever possible," says RJ Thompson, managing director of the Sex Workers Project at the Urban Justice Center, which provides legal services to sex workers and trafficking victims and advocates for public policy change.

Many national women's rights organizations, like the National Organization for Women (NOW), oppose the full decriminalization of sex work, Thompson says. In October, NOW Vice President Christian Nunes opposed a proposed decriminalization bill in Washington D.C., saying, "Prostitution is the only form of employment that intersects with forms of violence and other illegal activities,” according to The New Republic.

"When these advocates say that everyone is a victim and no one can consensually do sex work, that it's oppressive always to women, they're not speaking for thousands of people's reality, and they don't get to speak for our reality," Thompson says.

Sex workers want to see politicians move away from policy informed by "antiquated, second-wave feminism," as Thompson says, and instead consult sex workers on issues like decriminalization and human trafficking.

What Presidential Candidates Have Said So Far

In May, BuzzFeed News asked all of the presidential candidates whether they think sex work should be decriminalized. Rep. Tulsi Gabbard and Sens. Cory Booker and Kamala Harris, who has since dropped out of the race, all said "yes." Booker said he doesn't believe "activity between consenting adults" should be criminalized; he would focus instead on harm-reduction policies. A spokesperson for Gabbard told BuzzFeed she would decriminalize sex work at the federal level. In June, Sens. Bernie Sanders and Elizabeth Warren both said they would consider decriminalizing sex work, Vice reported. They have yet to release formal policy proposals or plans.

In an interview published Nov. 14, Warren told The Root she's spoken with women “who have really opened my mind ... about the impact of criminalization of sex work." She said she's open to decriminalization, but noted that "when we design the rules ... we can’t exploit the vulnerable."

Sex Workers Want To See The *Right* Kind Of Decriminalization

The type of partial decriminalization most often discussed by politicians is called the Nordic model, Swedish model, or end-demand model. It removes criminal penalties for sex workers and intends to only prosecute customers and pimps or sex traffickers, according to The Nation. Spellman says the model is intended to reduce harm to sex workers, but it doesn't do that. An Amnesty International report on the effects of the Nordic model found that sex workers often face more violence and harassment from both police and their customers, The Nation reported.

"How do you criminalize part of a transaction? That's like saying, 'OK, well, we're going to legalize marijuana but you can't buy it,'" Spellman says.

Under the Nordic model or similar models, sex workers may not be able to rent apartments, since landlords could be held responsible if sex is sold there. In Norway, some sex workers who reported violence to police were evicted or deported, according to Amnesty International's report. “If landlords don’t evict, the police will launch a criminal case against them," one sex worker told Amnesty.

Nina Luo, an organizer at DecrimNY, which works to "decriminalize, decarcerate, and destigmatize" the sex trades in New York City and state, says people in the sex trades "want a recognition that sex work is work, which does not mean that everyone needs to or wants to or loves to do sex work, but that it is an actual form of survival and a living for a lot of people."

The "right" form of decriminalization shouldn't be about getting people who want to do sex work out of it, she says, but about ensuring that sex workers have the resources they need to do their work safely or to leave if they want to. This extends to court-mandated "diversion programs": These programs, which often include counseling, are meant to help people get out of sex work, but tend to treat all sex workers as trafficking victims. The ways compliance with these programs is enforced also keeps sex workers enmeshed in the court system, The Nation reported, further criminalizing them.

"Full decrim," as sex workers and advocates call it, also needs to be accompanied by policies that support sex workers. These include robust protection from discrimination, universal health care, a living minimum wage, and the Homes Guarantee, which would assure that everyone has access to affordable, sustainable housing. Sex workers need to "have enough options so they don't feel like they're trapped into doing what they're doing," Luo says.

Currently, "The way that the laws are presented, landlords will discriminate against us ... and that affects us and it affects our families," the Incredible, Edible Akynos, a sex worker and organizer with the Black Sex Worker Collective, tells Bustle. Akynos also notes that evidence of sex work can be used in court to separate sex workers from their children.

Human Trafficking And Sex Work Are Not The Same Thing

The problem, many sex workers say, is that the Nordic model — and politicians who support it — equates or conflates consensual sex work and human trafficking, which Thompson says is problematic for a lot of reasons. First, trafficking occurs at higher rates in industries like farm labor, domestic work, construction, and food service, than it does in the sex industry. Despite that, Thompson says sex trafficking receives far more attention from funders, celebrities, and decision makers.

Second, this kind of conflation erases the nuance necessary to support all kinds of people in sex work. Thompson describes the reasons people are in the sex trade as "a spectrum of choice, circumstance, and coercion." The extremes on either end of the spectrum — the trafficking victim who is forced into the sex trade, and what Thompson calls the "happy hooker" narrative ("usually cisgender white women who have freely chosen sex work”) — are commonly represented in media, but don't reflect many sex workers' realities. Many experiences in between those extremes are left out of conversations about human trafficking and sex work, which makes it harder to create policies that support people no matter where they fall on this spectrum.

Sex workers say their solutions to trafficking make room for both of those narratives and many others. Christa Daring, a sex worker and organizer with advocacy group the Sex Workers Outreach Project USA, says the organization believes that full decriminalization is one tool that can combat sex trafficking. "If sex workers are not afraid to come forward and report crimes to themselves or others, they're actually able to alert authorities if there is trafficking going on," they say.

Additionally, for trafficking victims under the current criminalized system, "you have to be arrested to get resources," Spellman says. "It is a policy that does not work."

Laws that don't take the spectrum of sex work into account, then, end up harming sex workers. Because their work is illegal, Daring says sex workers are already forced to work underground, in an informal economy where they're more vulnerable to exploitation. Before SESTA and FOSTA, sex workers were able to use websites like Backpage.com, Reddit, or Craigslist's personals section to advertise their work and screen prospective customers; now, the bills made it illegal for websites to host content that could “promote or facilitate the prostitution of another person.”

Soon after SESTA-FOSTA passed, many sex workers were forced to work on the streets more or enter into exploitative relationships with pimps, which can be more dangerous, Marketplace reported. "If sex workers want to work inside, they should able to do that," Daring says, noting that screening clients online enables sex workers to have more control over their working conditions.

Can We Move Forward Under The Current System?

Many of the sex workers Bustle spoke with believe their rights won't ever receive federal recognition if things continue the way they are now, in part because the political system was built to exclude them.

Cristine Sardina, the director of sex worker advocacy group Desiree Alliance, says that as long as people conflate consensual sex work and sex trafficking, politicians aren't going to publicly support sex work, because that would be interpreted to mean they support sex trafficking. "It's going to be really problematic for the two-party system to ... fully support consensual sex workers in our rights," Sardina says.

The only political party that has explicitly come out in support of sex work, Sardina notes, is the Libertarian Party. Thompson believes the Democratic Socialists of America and the Green Party would likely get on board with sex work decriminalization sooner than the Democratic Party, because it's more in line with those parties' values. But at this point, Akynos says, "these political candidates don't really care" about sex workers, "and I'm not really sure what's going to have to change in order for them to care."

All of the sex workers Bustle spoke with agreed that there's one fundamental problem with how sex workers are treated in U.S. politics: They're ignored. "It would be great if these candidates actually sat down with some of us, and not just in these very privileged, white-led spaces," Akynos says. "[But] nobody gives a damn about what we have to say."