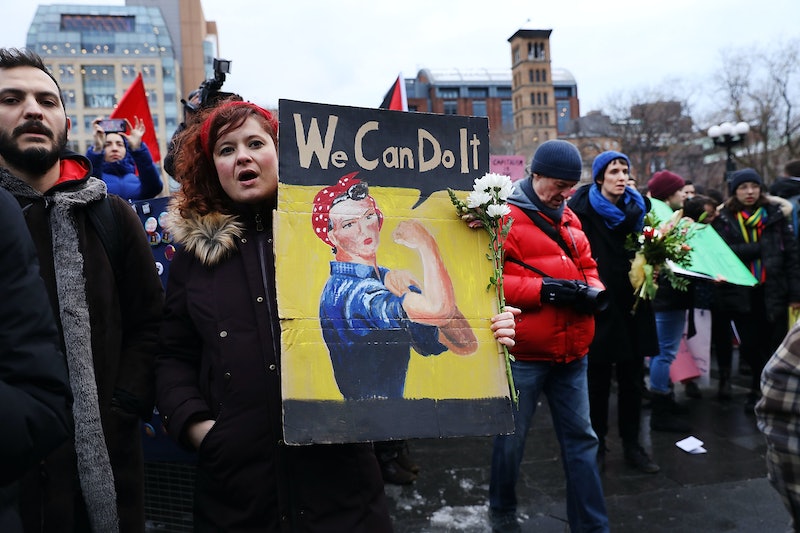 It's no secret that there is a very real wage gap in the United States, but according to a new study, sexism in southern states may have a lifelong impact on how women are paid, even if southern women move elsewhere as adults. The study was released by the Becker Friedman Institute for Economics, based out of the University of Chicago.

"Sexism affects women through two channels: one is their own preferences that are shaped by where they grow up, and the other is the sexism they experience in the place they choose to live as adults," reads the study's research brief. The paper was written by Kerwin Kofi Charles of the University of Chicago, Jonathan Guryan of Northwestern University, and Jessica Pan of National University of Singapore.

Researchers determined which regions of the United States were more or less sexist by analyzing answers to eight questions about women's roles in society, according to The Hill.

"Specifically, sexism prevails in a market when residents believe that: women's capacities are inferior to men; families are hurt when women work; and men and women should adhere to strict roles in society," the study's research brief explains.

The study focused only on white women, according to The New York Times, because researchers wanted to make sure that they were tracking gender discrimination, not racial discrimination. If they included people of color in their research, they said they weren't sure they would be able to determine whether wage differences were the result of race or gender, according to the Times.

It's important to note that women of color suffer the most significant wage gap out of any group of people in the United States. According to the National Partnership for Women and Families, black women who work full-time earn only 63 cents for every dollar paid to non-Hispanic white men. Women, overall, make 80 cents to the dollar compared to men.

According to the study, women are beholden to sexist beliefs both internally and externally. In other words, the sexist beliefs they are raised with can have a significant, lifelong impact on their socioeconomic outcomes, just as sexist beliefs held by a community they move into can do the same thing.

"These cultural norms are not only forces that occur to women from external sources, but they are forces that also exist within women, and are strongly affected by where a woman is raised," researchers wrote.

The beliefs you are raised with can have a lasting impact your decision making processes, and according to Monday's study, that includes how you assess your role within a society. If women are to reach pay equality, it seems that some changes must be made at home, as well as in HR departments.