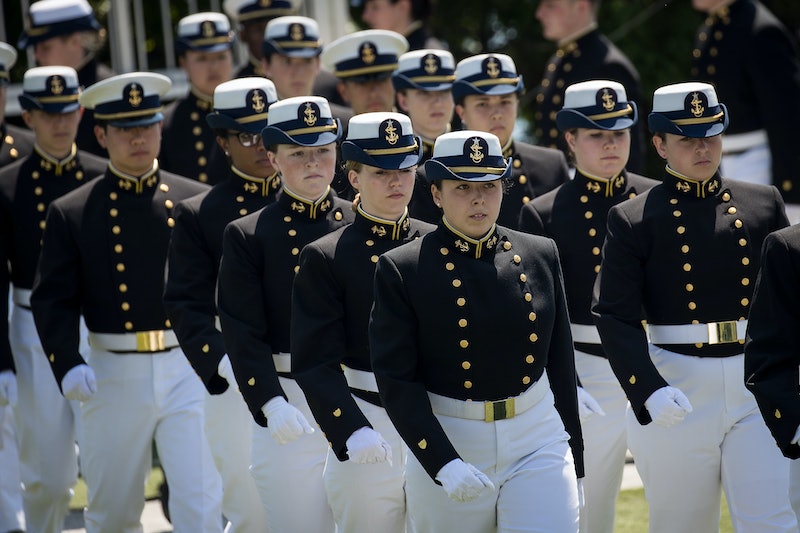 It's no secret that sexual assault is a widespread problem that affects people in all areas of society. As it turns out, though, even increased focus and prevention efforts don't always have the intended effect of curbing assaults. In one particularly glaring case of this, the issue of sexual assault in the military has worsened despite prevention efforts, according to a new Pentagon survey released on Thursday, the Associated Press reports.

"To put it bluntly, we are not performing to the standards and expectations we have for ourselves or for each other. This is unacceptable," acting Defense Secretary Patrick Shanahan wrote a letter to top officials in his department. "We cannot shrink from facing the challenge head on. We must, and will, do better."

The Pentagon report included cases of undesired sexual contact that ranged from groping to rape, according to CNN. Women in the military between ages 17 to 24 were most likely to have experienced sexual assault, as CNN wrote. This was also the group that also saw the greatest increase in instances of sexual assault, according to a press release from the Department of Defense.

“The challenge we have is every generation we have coming into the military is new and different and coming from a different place,” said Elise Van Winkle, executive director for force resiliency at the Department of Defense, according to the press release. “We have a responsibility as a military to change the behavior of our service members as they come in, to teach them what is right and wrong in the military, and what our expectations are for them no matter where they come from."

Multiple officials from the Department of Defense have made statements attributing the rise in prevalence of sexual assault as a "leadership issue," as the military's Sexual Assault Prevention and Response Office Director Navy Rear Adm. Ann Burkhardt said in a press release.

“I think it really is a leadership issue, and that means it really is all of us participate in the process to look at ways to address the climates," Burkhardt said.

In his letter, however, Shanahan suggested a more extreme step to combat the issue — making sexual harassment into a "stand-alone military crime," as recommended in a report issued by the recently formed Sexual Assault Accountability and Investigations Task Force. This wasn't the first time he had brought up the issue; on Wednesday, he said as much in testimony before the House Armed Services Committee, according to CNN.

"This would be news breaking, we're going to criminalize certain activities in this next year to reflect the seriousness that we're going to take on certain behaviors," Shanahan said, per CNN.

As the Pentagon report shows, though, there's much work that needs to be done in order to truly address the situation and make the military a safe place for any person willing and able to serve.