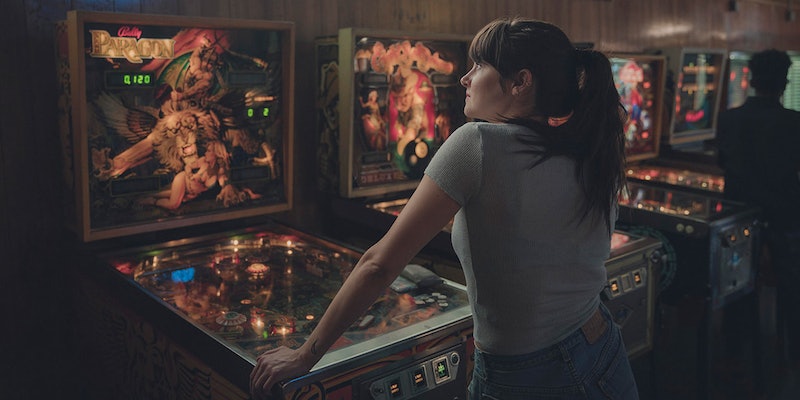 Shailene Woodley has been acting onscreen since she was eight years old. She broke out in a big way when she was 17, in The Secret Life of the American Teenager. Now 27, she's played a determined YA heroine in a post-apocalyptic world, a young mother and survivor making a new start, and a teenager in love (a few times over). But her latest work, in the Toronto International Film Festival premiere Endings, Beginnings, is Woodley's most intimate, exposed, and adult role yet. The movie is also partially improvised, which required her and her fellow actors to be present in a different way than they would in an entirely scripted film.

In Drake Doremus' (Like Crazy) new feature, the Emmy and Golden Globe nominee plays Daphne, a young woman who uproots her life after a traumatic experience with a male coworker, moving into her sister's pool house and swearing off dating for the next six months. Jack (Jamie Dornan) and Frank (Sebastian Stan) inconveniently crash land into her life well before the half year is up, and soon, Daphne finds herself in a complicated situation with both men.

"I guess you could describe it as a triangle," Doremus says when he, Woodley, and I meet at the TIFF Lightbox in downtown Toronto, "but it’s far messier than that. We wanted to make something that dissected the truth of that. Things just don’t end really cleanly and perfectly, and [you don't] take the perfect amount of time before the next thing begins in your life. Things overlap, and things are weird, and things are messy, and things are not black and white."

The filmmaker doesn't audition people for his movies, because, he says, he prefers to "look under the hood" of his actors. It took one hour-long meeting before Doremus and Woodley knew they wanted to pursue this project together — this after they had met over and over again over the years at Sundance, striking up a casual friendship and mutual appreciation. That appreciation has obviously only grown as they've finally collaborated; they frequently compliment each other's answers during our chat. "I love that: 'Most people want to make movies to escape, but I make movies when I want to look in the mirror,'" Woodley repeats at one point, quoting Doremus' last comment. "That’s f*cking deep. That should be your bio."

Endings, Beginnings is a rarity of a film in 2019: a modern romantic drama. Sure, the rom-com is officially back, and period love stories have never gone away. But what's the last new movie you remember seeing that's set in the present day and revolves around the romantic and sexual entanglements of actual grownups?

"You’re the only person making movies like this," Woodley says to Doremus. "These are the movies I wanna see," he reasons. "And there’s a lack of them, and it’s frustrating."

What also feels really fresh about the triad at the center of the film is that the audience never really gets the sense that Endings, Beginnings is about Daphne choosing between men. She's looking for a sense of self that she's lost. Doremus says he wanted to illuminate her character through "the Mr. Potato Head theory." He clarifies: "You’ve got these men that essentially are representing different things that a person desires, wants, needs, feels, and is, and if you could put them all together, you’d have the perfect person. But there is no perfect person. There’s just the right person at the right time."

Dornan's Jack is a professor with a stable job, a beautifully decorated apartment, and an sweet-faced corgi — the kind of resume that might get the "boyfriend material" stamp. Stan's Frank is impulsive, thinking nothing of driving up the coast to sleep in his car for the weekend, just to hit some parties and see the sunset. Per the filmmaker's point, they both offer Daphne things that she needs or desires. And Woodley says that the different energies she shared with each actor made it so that she didn't have to do much capital-a Acting at all.

"[Jamie and I] had [something] very much like a brother/sister kinship," Woodley says. "I just want to like, watch a movie with you and drink some wine and hang out." And indeed, Daphne seems to feel more at home and comfortable when she's with Jack, as if they've already settled into the later stages of a relationship, when the passion has cooled off.

Meanwhile, the sexual chemistry between Daphne and Frank is almost overwhelming. There's a scene where they stare at each other from across a crowded room (that Jack is also in) that feels like it should come with a warning of some kind.

"Sebastian and I naturally had a very deep connection in the sense where we would sit next to each other for an hour, not say one word, and yet, feel like we were communicating," Woodley says.

Some real-world scheduling issues also ended up contributing to the uneasiness of the triangle. Dornan arrived to the shoot after the other two actors because of a prior commitment and had also never improvised before. "His character felt on the outside of something that he didn’t understand was going on without him, and Jamie felt that way too," Doremus says.

While Woodley never really felt like she was "cheating" on one actor or the other, the art-imitates-life of filming itself wasn't lost on her. She'd go from "eating Indian food [with Jamie] and talking and laughing, and then, 25 minutes later, doing a scene where I have to f*ck Sebastian on the floor," she laughs. "You just kind of have to roll with it. The beautiful thing that I got to do is just play off of these people."

Sex is essential to the film because of what we learn about Daphne through her experiences and what she learns about herself. Going into those intimate scenes, Doremus says they'd "emotionally block" them, plotting out "what [Daphne's] going through" from moment to moment. And, especially since the film is so improvisational, communication was key to a safe set. "Drake would ask me, 'What are your comfort levels, what do you want to do?'" Woodley recalls. "And then [Dornan and Stan] would ask me individually as well." The film also has a female director of photography in Marianne Bakke, which made a difference to the actor.

"There’s just something about the safety that I felt having this woman with a camera right in my face and on my breasts and on my body, knowing that she was capturing it in such a tasteful, sensual way by collaboration with Drake that made me feel even more free to truly let myself be as bare as I needed to. Because I knew it wouldn’t be exploitative."

Still, she covers her face as she remembers squirming a bit when she saw her longest sex scene play out in the theater at the TIFF premiere. "My parents are going to see this!" Woodley recalls thinking.

The premiere wasn't the first cut of the film that the actor had seen. Doremus had shown her a couple of earlier versions months prior, but Woodley says that, at that point, she hadn't yet been able "to separate [herself] from the experience" and felt "too vulnerable" to view it objectively. Now that she has, she confidently calls it "a f*cking great film," though she has one more request of her filmmaker.

"I would love to come to Drake’s house and sit there for 10 hours and watch all of the scenes that are not only not in the movie, but takes that were never even going to be a part of any scene," she says. "I’d love to watch those from an acting point of view to just learn and see myself do different things, to go, 'that’s shitty' or 'that’s good.' On an improvised film, you want to see everything."

Doremus says he cut have culled together "eight different movies" from the raw footage he captured. But the final product as it stands is one that will surely leave most audiences nodding — and occasionally cringing — in understanding as Daphne searches for self-acceptance.

"It’s a quest for her to understand her identity and the decisions she makes," Woodley says. "Because between the ages of two and seven, we f*cked up our entire adulthoods ... and our whole lives we’re trying to dissect who we are and why we are who we are. But if we can find compassion for ourselves through that process, that’s where true self-love and self-joy and self-reverence can come into play, and Daphne’s on that journey."