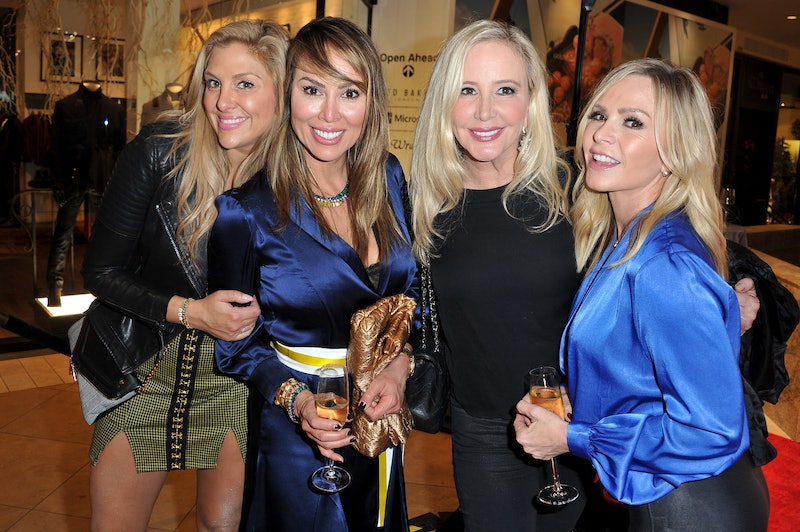 You can always count on the Orange County housewives to bring the drama and this season has been no different. Especially given the recent events during the group trip to the Miraval Arizona Resort and Spa in Arizona where Kelly hit Shannon in the head with a mallet and Shannon landed in the ER. At the end of the episode, producers can be heard asking Shannon if she wants to press charges against Kelly for the incident. Knowing Shannon, taking legal action against Kelly isn't exactly out of the question. So how did this play out?

It all started innocently enough. The women were taking part in a restorative meditation session complete with singing bowls. Shannon put one on her head and Kelly thought it would be great to sneak up behind her and whack her on the head with the mallet. "Dong, dong!" Kelly, who appeared to have had some drinks at the villa prior to the meditation session, kept calling out, imitating the gong-like sound of the bowls when struck.

It was supposed to be a joke, albeit a somewhat violent one. However, after the ceremony, Shannon wasn't happy with Kelly's attempt at humor, claiming that she had a headache from the incident. Kelly thought Shannon was being overdramatic and insisted that she "did not hit [her head] hard." She even invited Shannon to hit her in the same way to prove her point.

While the episode's cliffhanger left viewers wondering whether Shannon would press charges against Kelly over the incident, it's pretty safe to assume that didn't happen. After all, given that RHOC finished filming months before the episode air, chances are that a lawsuit between the two women would have been major news when and if it happened. Since there's never been any reports of Shannon escalating the incident, it seems unlikely that she did.

Bustle did reach out to Bravo for comment on the incident, though they declined to offer any insight into what went on behind-the-scenes as they feel confident that the next episode will answer any questions fans might have about how the situation between Shannon and Kelly was resolved.

However, they did insist that, "Kelly and Shannon sit down and talk about the incident" in this week's episode, suggesting that they manage to work through any remaining anger, resentment, or confusion. How long that lasts remains to be seen, of course.

It's pretty early in the RHOC season for things to be falling apart so spectacularly, but blowing relatively minor issues way out of proportion seems to be the M.O. of most Real Housewives cast members regardless of the city. It's what keeps audiences tuning in week after week, so we can't exactly blame them.

While Shannon and Kelly will likely decide to let bygones be bygones, chances are that the mallet incident won't soon be forgotten and will likely be an occasional source of tension that's brought up at random times throughout the rest of the season whether by the women themselves or their castmates. We should expect nothing less.