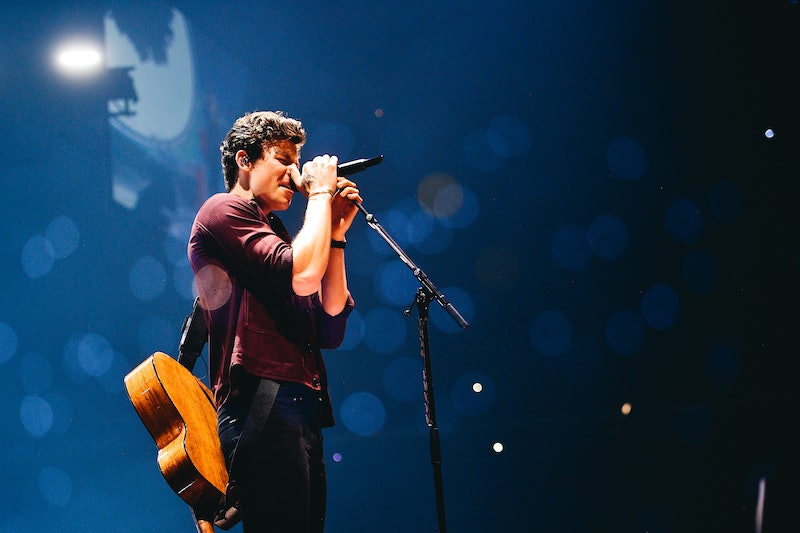 Shawn Mendes has a fast growing collection of tattoos, and now he has added a seventh one into the rotation. He might have only started hitting the tattoo parlor three years ago when he turned 18, but he has made up for lost time. Shawn Mendes has a butterfly tattoo on his arm, and the story behind it is so sweet. It was all thanks to a fan.

Last week on July 17, a Mendes fan named Kayla tweeted out a black and white photo of Mendes. On the picture, Mendes had a Photoshopped butterfly on his arm, just visible underneath the sleeve of his t-shirt. The butterfly was about the size of a fist, and one of its wings were made from a series of different flowers that fit within the outline. Underneath the two photos Kayla tweeted, 'Shawn mendes with a butterfly tattoo. I rest my case."

While it's not unusual for a fan to alter a photo to show how an artist might look with a different aesthetic, it is pretty unusual for the said artist to take the suggestion. Mendes saw the tweet and asked Kayla directly if he could have the butterfly design. "Wait this is awesome, can u DM the drawing ??" Mendes asked via Twitter.

Kayla and Mendes exchanged direct messages, and within a few minutes Mendes had the butterfly sketch. The original drawing was created by Chile-based tattoo artist, who goes by @macdreaper on Instagram. He specializes in delicate floral and animal tattoo sketches, just like the one he whipped together for Mendes. Kayla then used the photo editing app, PicsArt, to put the tattoo onto the artist's arm.

Enjoying the imaginary custom design so much, Mendes decided to make it permanent. On July 21, Mendes booked an appointment with Toronto tattoo artist Livia Tsang. He got the exact same tattoo on the exact same arm as the photo.

Toronto is Mendes' home town, and Tsang was the artist who gave him his first two tattoos back in 2016. She is quickly becoming Mendes' trusted and go-to artist.

Mendes posted a Boomerang video of him in the chair with Tsang finishing up the butterfly on his arm, proving this was real and that he had zero qualms with impulsive decisions.

Tsang also posted a photo of the finished tattoo on her own Instagram, giving curious fans a better look at the butterfly.

These jolts of inspirations from fans isn't a one-way street. Mendes has also inspired fans to get tattoos based on his handwriting. In Sept. 2018, super-fan Megan announced on Twitter that she finally got a tattoo based on Mendes' handwriting.

In a tweet Megan shared that after two years she finally got her "Shawn tattoo." She then posted a screenshot of a note she wrote in 2016, which read, "Next time I see Shawn have him write hold on for me to get tattooed."

The next photo showed her taking a selfie with the artist, and then a piece of paper with a handwritten note reading "hold on."

Mendes takes his fans' suggestions seriously — so much so that sometimes he gets their ideas tattooed onto his body.