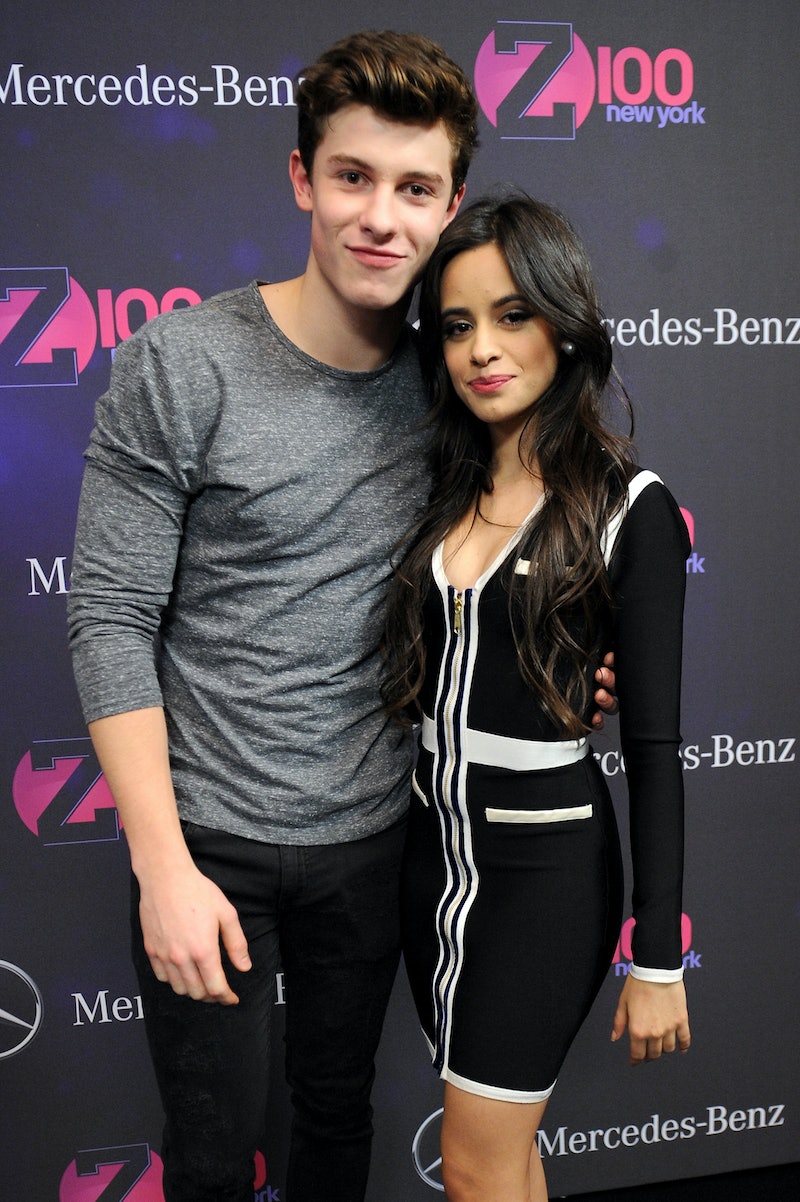 Shawn Mendes and Camila Cabello have been making waves this summer with their song "Señorita." The music video sparked relationship rumors about the singers, so it's no surprise that the "Señorita" behind-the-scenes video showed off even more of the singers' playful chemistry — and fueled even more rumors that they're a couple in the process.

On Aug. 15, the BTS footage was posted on Mendes' YouTube channel, and it showed the dance rehearsals for the last part of the music video. The video includes footage of the singers receiving instructions and stretching before performing the "Señorita" dance that wowed fans. Additionally, Mendes and Cabello are seen playing patty-cake, laughing, and, of course, learning those sensual dance moves that fans cannot get enough of.

Mendes and Cabello have sparked romance rumors all summer long. But they're no stranger to the romance rumor mill. As reported by Seventeen in 2015, there was also speculation that they were dating when they released their last duet "I Know What You Did Last Summer." However, "Señorita" is way steamier than their last duet, and it has a steamy video, too.

The singers haven't shied away from showing real-life PDA since "Senorita" was released either. Per Teen Vogue, fans have posted videos and pictures of the two at events like a recent Blink-182 concert. They were also seen nearly kissing in Florida. On Aug. 9, Cabello posted "I love you" for Mendes' birthday, and the two were spotted kissing at his birthday party, as reported by Hollywood Life.

But whatever their relationship status is, fans can't get enough of the new rehearsal footage as the excitement on Twitter proves. User @perfectkarla tweeted, "watching señorita bts and i rlly want shawn and camila to be their own movie. they'd be so." And user @cabEYomyeggo tweeted, "shawn and camila knew the drought was hurting us and they dropped the rehearsal video we love a charitable couple."

In a recent interview with Variety, Cabello also talked about being in love and how she doesn't really use the past tense anymore when singing about it. “Falling in love is like an infinite amount of levels and layers and angles," she said. "I fell in love and just opened up. Everything was written in present moment." Her collab with Mendes shows her words in action as she sings about how she "loves it" when he calls her señorita.

The song took eight months to make and Cabello told Variety that it made sense to work with Mendes again because they've been friends for so long. “I’ve known Shawn for such a long time, and it’s so much fun getting to work and do things with somebody who means a lot to you," she told the publication. But in a joint interview with V Magazine, Mendes teased Cabello about the fact that it took him 10 months to "convince" her to work with him again. "This is true. My fans are just absolutely gonna hate me now," Cabello said. "They’re like, 'She’s so stupid.' Honestly, it just takes the right time for things to happen, I feel."

"Señorita" is definitely on replay all over the radios this summer, so whether or not a romantic relationship came out of it, a hit definitely did. And considering the cute, playful chemistry seen in the rehearsal footage, there's no denying Cabello and Mendes had a great time making music video magic together.

More like this
Sadie Sink Would Escape Vecna From 'Stranger Things' With This Taylor Swift Song
By Grace Wehniainen
What Is Ariana Grande's Net Worth? When It Comes To Money, She Has No “Problem”
By Hugh McIntyre
Lily Allen Was “Quite Emosh” After Performing Sober At Glastonbury Festival
By Stephanie Topacio Long
Olivia Rodrigo’s Song Dedication To 5 SCOTUS Justices Sent A Strong Message
By Grace Wehniainen
Get Even More From Bustle — Sign Up For The Newsletter