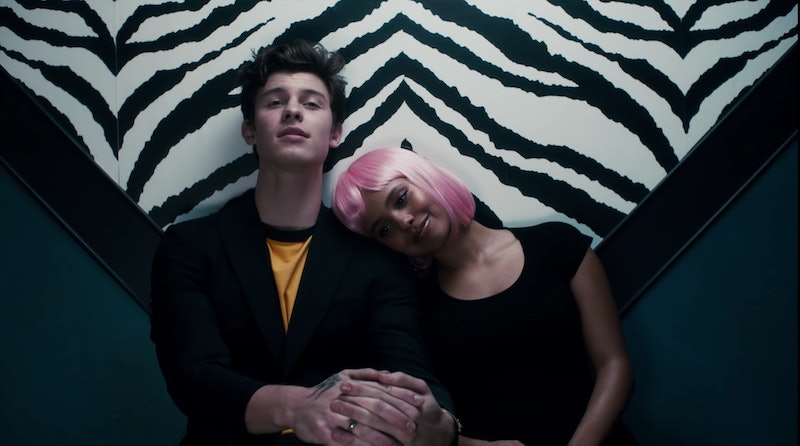 We may never know what Bill Murray whispered into Scarlett Johansson's ear at the end of Lost In Translation, but at least we do now know what the movie would have looked like if it starred young 20-somethings instead. For his "Lost In Japan" music video, Shawn Mendes and 13 Reasons Why star Alisha Boe recreated the whirlwind romance from Sofia Coppola's iconic 2003 film in order to tell their own, bittersweet love story.

The video — which recreates several iconic moments from the movie — opens on Mendes arriving at a hotel in Japan and winding up in the same elevator as a mysterious woman, played by Boe. The pair exchange flirty looks in the crowded space, while the video cuts back and forth between their first interaction and Mendes in a series of scenarios straight out of Lost In Translation: sitting on his bed in a green robe, awkwardly filming a whiskey commercial, and adjusting his shower head. (Boe, meanwhile is seen staring out her hotel window longingly, à la Scarlett Johansson.)

Everything culminates in a dance party at a karaoke lounge where Mendes and Boe, wearing a pink wig reminiscent of Johansson's (which the actress admitted on Instagram that she kept after the shoot) serenade each other while their friends goof off around them. Among them is Zedd, who remixed "Lost in Japan" for the video. And finally, in perhaps the video's most poignant homage to Lost in Translation, Mendes and Boe sit in a hallway, resting their heads on each other and staring off into the distance.

But while Lost In Translation ends on an infamously bittersweet note — with Murray and Johansson's characters sharing one last, memorable moment together before parting forever — Mendes' video ends in a much more hopeful way.

After Boe steps off the elevator with one last look, the singer gets some encouragement from the man standing next to him to run after her; he squeezes out at the last minute to follow Boe and, hopefully, start living out the whirlwind romance that he'd been picturing this whole time. Where Coppola's film established the idea of a brief friendship that changed both people's lives, Mendes' interpretation is a bit more romantic, with the couple's meet cute opening up the possibility of a real relationship.

In one of her highest profile roles since 13 Reasons Why, Boe plays the intriguing love interest with equal amounts of charm and hesitation, and the looks that the pair share throughout their adventures around Japan are enough to make even the most cynical viewer fall a little bit in love with her, Mendes and the whole video. And fans certainly did fall in love with the video, if the flurry of tweets that accompanied the release of "Lost In Japan" is any indication.

If nothing else, the "Lost In Japan" music video seems to be the perfect case for casting agents to put Boe in a romantic comedy as soon as possible. After all, Netflix is apparently reviving the genre; why not let Boe show off her romantic heroine chops in an a movie of her own? (And if Mendes wants to try his hand at acting alongside her, well, that seems like a surefire way to guarantee a hit.)