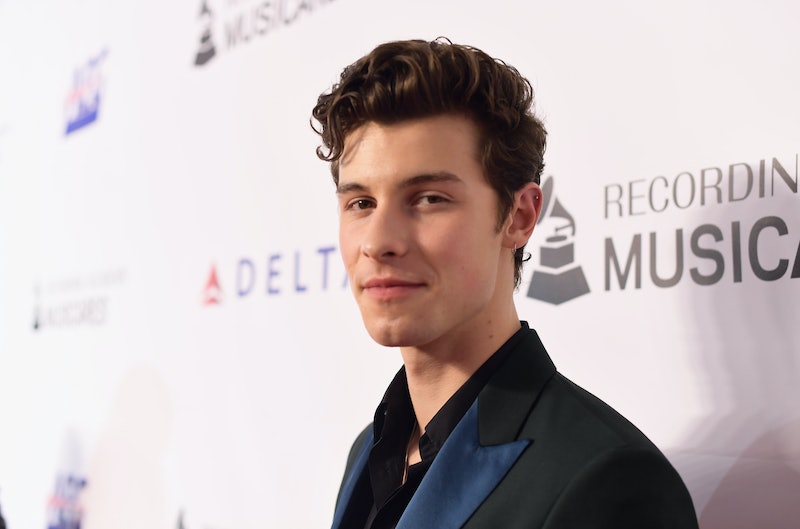 Shawn Mendes has the voice of an angel and the chiseled jaw of a Michelangelo statue. It's as if the 20 year-old were destined for stardom, but the "In My Blood" singer is just getting started. In fact, he might soon eclipse the "pop star" label by starting a whole new career. At a Q&A with fans in Turin, Italy on March 24, Shawn Mendes revealed that he's going to be in a movie that will likely come out in the near future, Seventeen first reported. In video of the event uploaded to Twitter by @PopCrave, when a fan asked if Mendes will act in a film, he responded, "I think there will be one sooner than you guys think." As you can imagine, Mendes' affirmative answer to the fan's question caused the audience to break out into a collective gasp.

Whether or not acting is in his blood remains to be seen, but Mendes has hinted at wanting to become a multi-hyphenate in the past, so his decision to take on an acting role seems like a good choice for him. Back at the 2018 MTV Video Music Awards in August, Mendes told a Variety reporter on the red carpet that he'd hoped to break into acting "very soon." Referring to himself in third person, Mendes said, "Shawn Mendes has to stop touring as much to start acting." At the moment, the "In My Blood" singer is on his world tour — that's why he was in Italy during the Q&A — but it sounds like he found time in his busy schedule to either film a whole movie or at least land a role.

During the same interview on the VMA red carpet, Mendes said that he had already gotten "a few" scripts sent to him for consideration, but he wanted to find the right role. When asked if he'd attended acting classes, Mendes responded, "I've done a couple, I think maybe I'll do a couple more in the future."

As Seventeen reported, Mendes had previously appeared on The CW's show The 100, and The Hollywood Reporter noted that he'd voiced a character in the 2013 animated film, Underdogs. It seems like Mendes has his eye on meatier roles. Or at least fans probably want to see Mendes in meaty roles.

While it's unclear what an acting career could look like for the young singer, his IMDb page does have an interesting project that's labeled as being in pre-production, called Summer of Love. Back in 2017 Billboard had reported that Mendes would star in a movie musical with the same title, but it seems like the project never took off. According to the 2017 report, the film was set to take place in the late 1960s (hence the title) and it would be a road trip movie, but aside from Mendes's casting and the news that Ivan Reitman would direct it, Summer of Love seemed to have fizzled out.

If there ever were a movie that fans want to see Mendes in, something about summer and love could be a perfect fit. Then again, with a jaw line like that, anything is possible for Mendes, so fans will just have to sit back and see what happens next.