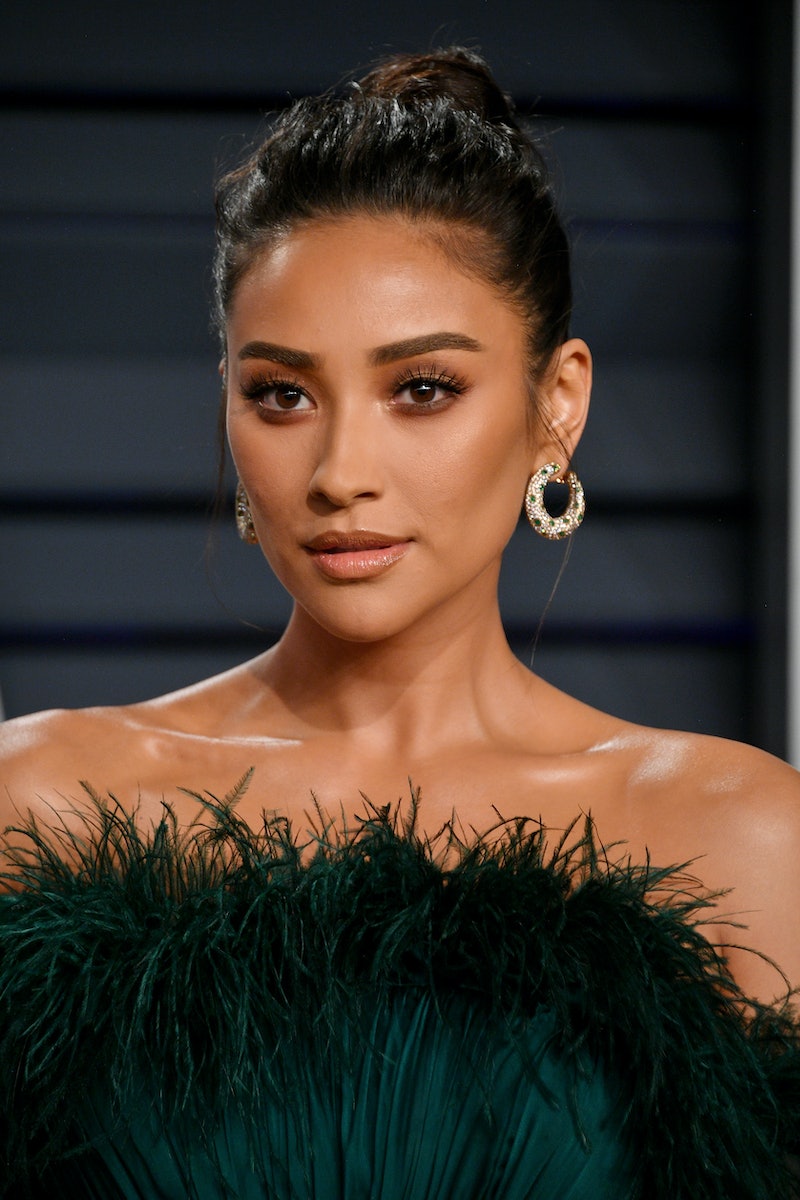 Now that it's summer, celebs are known to debut fun hair colors now and again. But while pastel pink strands and teal tips might be expected, one actress took it another step further. Shay Mitchell has blue hair now, and it's not just a subtle navy blue. Her cut is now a bright blue shade, and the unexpected color amps up the wattage in her look.

The lob in question was posted onto Mitchell's Instagram on June 27. "Ready to film my music video. Just need a song. And a vocal coach. And a record label," Mitchell jokingly wrote in the caption. "What should her name be?!" She debuted the look by styling the short cut into a slicked back, wet look. The blue hair starts off as an electric sky blue at the roots, and then fades into an ombre as it goes down to the tips. Mitchell's tips have a darker, royal blue hue.

But before you start freaking out that the Pretty Little Liars actress has swapped out her black hair for blue, the lob looks to be a wig. In Mitchell's Instagram Story, she set the record straight with a series of video clips. In the first one, Mitchell starts the recording with a selfie and writes "just another day playing a different character."

Mitchell then flips the camera lens so her followers can see she is on set, and supposedly inside the beauty room. You can see both the makeup table and makeup artist Ash K. Holm in the quick clip. The L.A.-based makeup artist does makeup for the Kardashians, Ariana Grande, and Camila Morrone, just to name a few.

The next clip shows Mitchell facing the camera again, where she reveals she's about to take off the wig. "We're going to take off the whole thing. And we're sad about it," Mitchell says. "Short hair, blue hair, just don't care." In the next clip Mitchell is back to her black hair, and bundled up into a robe.

Hopping over to Holm's Instagram Stories shows another video of Mitchell, and it offers followers another glimpse of the blue hair look. This time around Mitchell was dressed in a latex bustier top with a harness around her neck. It's still unclear if this is for a shoot or a filming role.

As for the blue wig, the mastermind behind the wet look was hair sculptor Tony Medina, who is a master at red carpet retro looks. Being LA’s premiere celebrity vintage hairstylist, this tousled blue look was a different style for Medina.

While Mitchell usually stays true to her black locks, she has changed her hair color before, albeit temporarily. In 2016, while on the red carpet in Toronto for the Much Music Video Awards, Mitchell had caramel blonde hair.

Later on in the year, Mitchell was part of a Smashbox campaign, and one of her favorite looks were her strawberry blonde wig.

Then more recently, in March 2019, Mitchell showed up with platinum blonde hair to the iHeartRadio Music Awards. The white bob was also a wig.

But even if the blue wig wasn't a permanent hairstyle change, it was cool to see the actress step outside of her comfort zone and try something radically different.