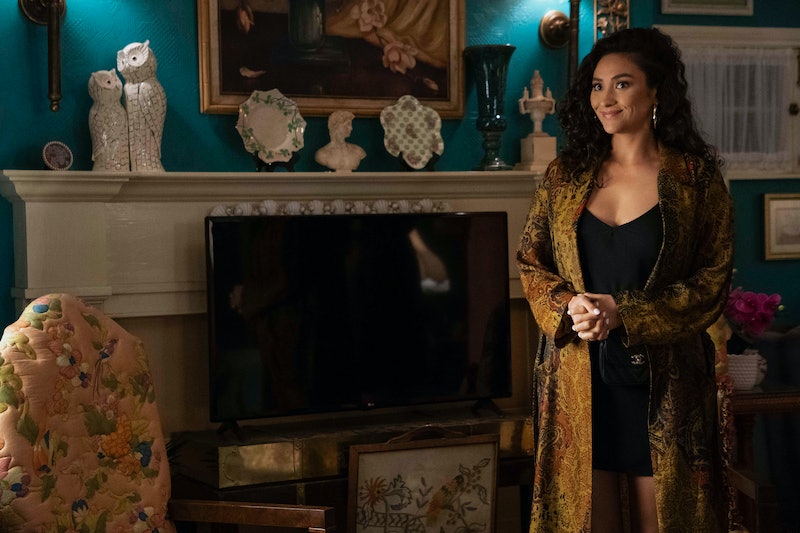 Unlike the more tightly wound Emily Fields from Pretty Little Liars and the desperate Peach Salinger from YOU, Shay Mitchell's Dollface character Stella Cole is the free spirit of her friend group. At least, that's what Mitchell called her in an interview with Entertainment Tonight Canada. She also called Stella a "really loving person," but when you first meet her in the Hulu series, you may disagree.

The premise of Dollface is that Kat Dennings' Jules gets abruptly dumped by her boyfriend and sets out to rekindle her female friendships. Mitchell's Dollface character Stella is a friend of hers from college, and when she's first introduced onscreen, she emanates total Peach vibes. She's decked out in head-to-toe luxury labels, she's obviously privileged, and she's not afraid to say what's on her mind. But Mitchell assures that her sweet side is eventually revealed.

“She is actually, when you see it, very different from Peach,” Mitchell said at the 2019 Television Critics Association press tour on Jul. 26, per Entertainment Weekly. “I was excited because it was a comedy role and it was a lot more lighthearted [than YOU]. They are very different characters. Aesthetically, you can see a similarity but when you get to know Stella, she’s really a wild spirit and a complete 180 from Peach. It was fun to go from that to this.”

In the show's trailer, Stella seems pretty happy-go-lucky. "Here's to second chances with old friends," she says while the group is out at a bar. "This is gonna be more fun for me if we're all drunk."

Stella is Mitchell's first comedy role, and in an interview with ExtraTV, she said that out of the entire cast, she's most like her character. "They're gonna watch the show and be like, 'Wow,' but it's true," she said. Brenda Song plays a very Type A Madison who's hesitant to welcome Jules back into her life, and Esther Povitsky plays Izzy, the awkward work colleague who rounds out the original trio.

According to Deadline, Lex Scott Davis was originally cast in the role of Stella, and Mitchell got the character in an April recast. During the TCA press tour, she said she was drawn to the show for its comedic nature, its all-female cast and crew, and its relatable story. It was created by Jordan Weiss and executive produced by Margot Robbie.

"I related so much to this show because of the relationships that the girls have with one another,” Mitchell said. “That’s very similar to my main friend circle outside of the show. If anything ever goes down I’m calling my friends first.” Which is exactly the kind of relationship that Dollface celebrates.