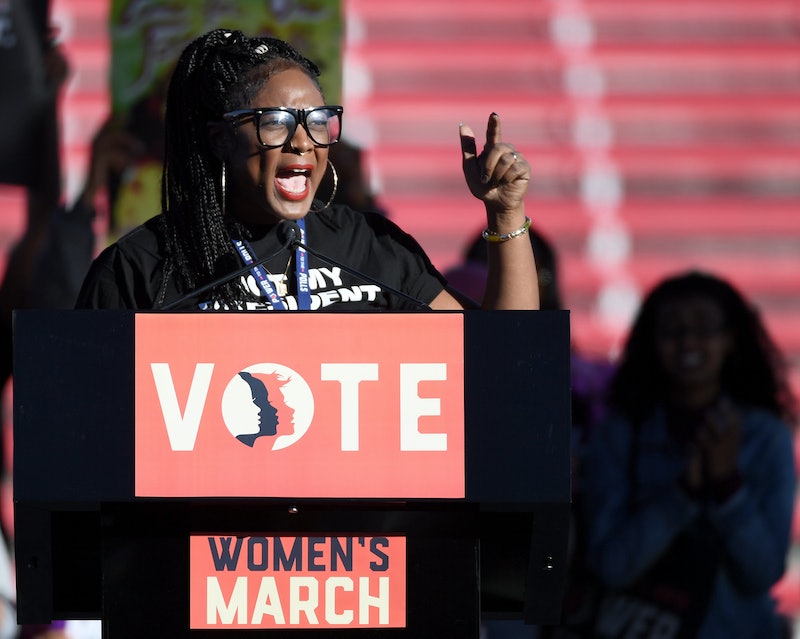 Women of color are key when it comes to deciding who will be the Democratic nominee for president, and for the first time ever, a candidates forum will be dedicated to the issues that matter most to them. The She the People Presidential Forum on women of color has been organized for April 24, but only three of the eight spots have been filled so far, as NBC News reports. Notably, no women candidates have signed up to attend yet.

"No Democrat is winning the nomination, or the White House, without women of color," She the People founder Aimee Allison told NBC News. "This forum will allow candidates to speak directly to one of the largest Democratic voting blocs — and most reliably Democratic — in the country ahead of a contentious primary."

In addition to speaking to women of color across the country, there will also be about 1,000 in the audience at the event. The public is invited to attend the presidential forum, which will be held at Texas Southern University, a historically black college in Houston. Free tickets are available on EventBrite.

For those that can't attend in person, the way to watch is through a live stream on Facebook. The group suggests that you like their page now to be sure not to miss it.

The topics discussed will be "issues important to women of color —issues of racial, economic, gender, and social justice," the event page reads. This is not a debate — which the Democratic National Committee will control — but is rather a forum. That means that the candidates go to the stage one by one and have a seated conversation.

Women of color have been key to winning recently for Democrats in several state-level races, and party leaders have acknowledged that. DNC Chair Tom Perez wrote on Twitter, "Let me be clear: We won in Alabama and Virginia because #BlackWomen led us to victory. Black women are the backbone of the Democratic Party, and we can’t take that for granted. Period."

In 2016, there was no such forum, and Hillary Clinton won the votes of black women handily over Sen. Bernie Sanders. Now Sanders is paying more attenion to black voters — even if he hasn't committed to the women of color presidential forum. "The margin by which we lost the African-American vote has got to be — at the very least — cut in half or there simply is no path to victory," members of his team wrote recently in a memo according to The New York Times.

There are at least two forums on the calendar already. The first one on April 1 will be hosted by several left-leaning groups including the Planned Parenthood Action Fund, Service Employees International Union, and the Sierra Club. As of last week organizers said at least six candidates were on board. The other planned forum will be in October and is hosted by the LGBTQ advocacy organization the Human Rights Campaign.

April 24 is just around the corner. Get your ticket now or tune into the live stream if you're interested in what the candidates have to say.